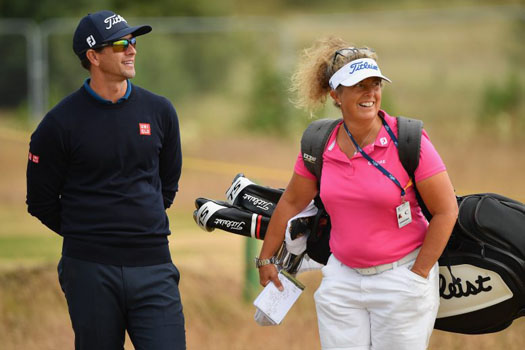 Adam Scott continues to audition different caddies this year. He let current sherpa David Clark go and tried out former looper Stevie Williams. But this go ’round, Adam has enlisted the help of none other than Fannie Sunesson (Nick Faldo’s faithful bag carrier). She was with Sir Nick for four major wins including two Open Championships.

Golf-monthly.co.uk’s Elliot Heath has the details.

Adam Scott is a man in desperate need of a shot of vitality. The former No. 1 has fallen to No. 82 in the world, with just one top-10 finish in 15 PGA Tour starts, and his notoriously bad short game has never been worse (192nd in strokes gained: putting).

The Swede is known for her time with Faldo in the 90s where the pair won four majors together. She became the first female to win a men’s major as a caddie. Thus, Scott is hoping her experience will vault him up the leaderboard this week.

She had most recently been caddying for her compatriot Henrik Stenson before calling it a day in 2012 due to a back injury.

Sunesson has turned her hand to coaching the swing and mental game after retiring as a caddie.

She is credited with helping Martin Kaymer reach the world number one spot in 2011.

Scott had four consecutive top-10 finishes at the Open from 2012 to 2015, but finished T-27 the last time the championship was at Carnoustie. The Aussie is playing with Brendan Steele and Zach Johnson at 1:15 p.m. local time on Thursday.

Share: Adam Scott Brings Back A Caddie Legend To Open Championship–No Not Him