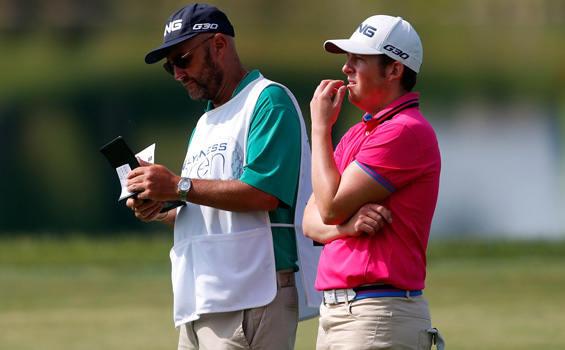 Outside of the bigger name phenoms already pocketing endorsement coin to fund their budding pro tour careers, many other players have to solicit investors to bankroll their tour dreams for example, soliciting investors. It’s not unlike the stock market or roulette tables. Place enough bets and you’re sure to catch a winner, right? Yet a phenom can flame out while another under the radar catches fire and repays the investors happily and quickly. And, just like Wall Street or Las Vegas, be prepared to lose whatever you plunk into the pot.

Golfworld.com’s Alex Myers reports on what its like to throw down some coin on a pro golfer hopefully on the upswing. Its an enlightening read.

I’d never come across such an opportunity, though, until last year when I happened to see a retweet of a tour pro named Dave Coupland. Dave was looking for investors in himself, and I was immediately intrigued.

Thank you for all the recent support. Shares are selling thick and fast!! Join my journey and success in 2017. 🏆🏆⛳🏌 #DCGolfInvestments pic.twitter.com/RBmbNouIDq

But Buy low, sell high is all I could hear as I read Dave’s resumé. And “I WIN, YOU WIN!” seemed like a pretty good deal to me. So why would this golfer turned golfing commodity offer up a cut of his earnings? Because being a tour pro is ridiculously expensive, and often, this is the only way to make the dream of playing golf for a living feasible.

“It’s common,” Coupland said of player shares on the EuroPro and Challenge Tours. “A few guys I know did it before, and I discussed it with them and thought why not give it a shot?”

Why not give it a shot is also what I thought when I saw the seemingly reasonable price of £100 per share. And once I let the idea creep into my head, the fear of missing out on a good bet that often fuels gambling decisions (What if he gets back into the British Open and wins?!) took over. I definitely needed a piece of the action. Let’s make it two shares, I decided.

As with any stock purchase, there’s a tendency to constantly monitor your investment at first. At work, I frequently refreshed Dave’s Twitter feed, where he kept investors appraised of his play—and time in the gym. While at home, my wife caught me checking tournament scores on my phone in the middle of the night a couple times. Although, I’m still not sure she believed that’s what I was doing … (Side note: She also doesn’t know about the $250. Or the risky decision regarding our air conditioning. So please, let’s keep all of that between us.)

With Coupland’s season complete, it was time for this tour pro to put down his clubs and pick up a calculator to crunch the numbers. Coupland computed each share was now worth £63.93 (His total number investors also figured into the math as stated in the contract). So my two shares purchased for £200 were now worth £128 pounds or about $170 for a paper loss (You like that stock-market lingo?) of around $80 (A slight increase in the exchange rate helped cushion the blow).

Share: What Happens When You Buy Shares In A Pro Golfer