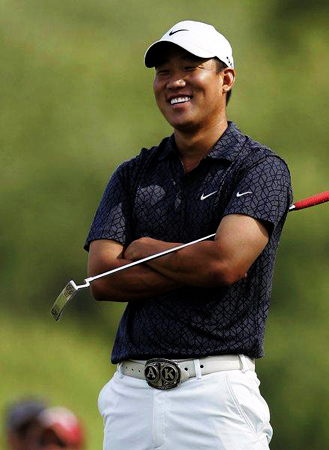 Anthony Kim is like the Loch Ness Monster these days with reported sightings but scant proof. Most know he hasn’t played competitive golf since 2012 to keep intact his hefty insurance policy paying off due to a wrist injury.

But, as GolfDigest’s Joel Beall reports, Kim was Santa Claus a few years ago for one very grateful waitress.

In a promo for Golf Channel’s “Swing Expedition,” Adam Schriber, Kim’s former swing coach, relayed a tale when he and Kim visited a pizza joint in Palm Desert, Calif., in 2008.

According to Schriber, the two were served by a pregnant waitress. Kim congratulated the woman, and remarked that her husband “must be so excited,” Schriber recalled.

A comment that struck a nerve with the waitress, as she broke down in tears. She told Kim that her boyfriend has left her, and admitted she was scared to have the baby on her own.

“My goodness, I didn’t see that coming,” Kim told Schriber.

Months later, Kim and Schriber returned to the restaurant, where they saw the aforementioned waitress. Schriber said that the woman greeted Kim with a hug, breaking out a photo of her baby. When Schriber asked what was going on, Kim replied he had left a gift for her at that initial meeting.

Happy Thanksgiving to you and yours.

Share: A Cool Anthony Kim Story For Your Thanksgiving Holiday