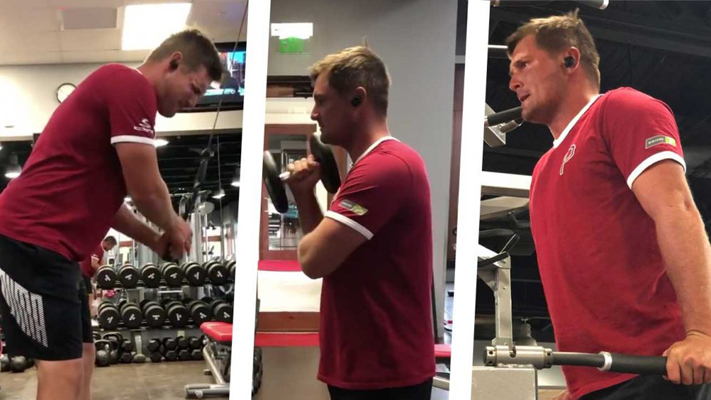 Bryson DeChambeau has a new obsession to become the perfect golfer. After working on how morning dew affects spin off moist clubfaces, using protractors to read greens to analyzing affects of leaving pins in or not when putting.

The Mad Scientist’s latest experiment is trying to get as “massive” as possible to counter the affects of exhaustion or hitting the ball farther. Golf.com’s Dylan Dethier interviewed Mr. Biceps as to what are his strength goals.

He says he’s been averaging a trip-and-a-half to the gym per day, at least an hour per session, and that he’s seeing results. His primary focus, he says, is core. “A lot of core.”

For DeChambeau, the philosophy is the exact opposite: His gym inspiration is to stave off a nagging back injury. That injury — which DeChambeau says stems from a childhood trampoline accident plus the wear of hitting nearly infinite range balls — left him in major pain last season. “Sleeping hurt, everything hurt,” he said. “But it’s pretty cool what you can do to the body by working out. Most people say, ‘okay, I just have to sit down and rest, I’ve gotta take time off,’ but I’ve tried that route and I’ve realized that actually makes you worse.”

DeChambeau has been working with Muscle Activation Technique (MAT) pioneer Greg Roskopf, both in Denver and from home, and it’s clear the doctor’s advice has had a strong effect.

“I was literally thinking I’d need surgery but I talked to Greg, he was like no, no, no, don’t do any of that, we’re going to teach your body to tolerate the force. Usually when ligaments get torn or bones get broken or whatever it’s because the muscles aren’t functioning properly, so thats what I’ve been doing.” He’s been focusing on exercises that get him into “extreme positions of rotations and flexions” at which point he adds weight to build mental and physical tolerance in those positions.

He was under 200 pounds then — now he’s 222. “I’m going to become like a gymnast. I watch online, on Instagram, these gymnast influencers, and that’s where I want to get.” It’s a step in the right direction, but 222 is not nearly big enough. DeChambeau has a Hulk-like vision for his future.

“I’ll never get to my target size or weight,” he says. “I think now, with this knowledge and understanding, the sky is the limit. I’m going to become massive.