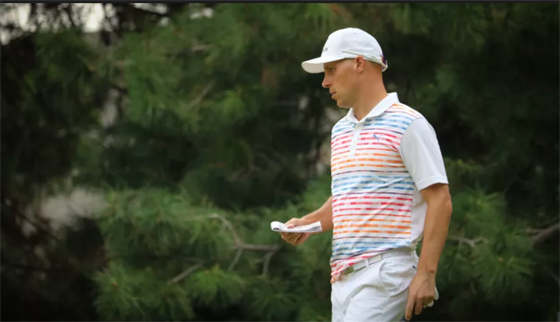 Ben Crane was assessed not one, but two FOUR stroke penalties yesterday at the Albertson’s Boise Open.

You ask what could he possibly have done to deserve it?

Too many clubs in his bag? No.

All clubs have some form of decal on the shaft. My best guess is the offending stickers were more serious(?) due to the data collecting?

“Tournament golf is pretty challenging but it’s REALLY difficult when you’ve accumulated 12 strokes before hitting your second tee shot,” Crane wrote on Twitter. Crane was carrying a driver and 6-iron with decals that help launch monitors collect data stuck to them. He did not use them in the tournament, but carrying the non-conforming clubs was enough to saddle him with two four-shot penalties. Actually using the clubs would have resulted in disqualification.

Because Crane noticed the decals on each club at separate times, he was penalized once for each infraction. The Web.com Tour stood by its call.

“As usually is the case when applying a penalty this big, you want to confirm your interpretation of the ruling. We conferred as a committee and also with the USGA about not only the decal but whether or not the penalty would be the same breach of the same rule or separate breaches of the same rule,” said Jim Duncan, Web.com Tour Vice President of Rules, Competition and Administration.

Can’t say I’ve ever heard of this penalty assessed before on the PGA Tour. But it had to happen somewhere previously. Otherwise, why the need to insert the rule? I’m betting the 20,000 golfers who responded to the USGA request for rule tweaking didn’t include this gem.

However, while most sane folks would say the rule blows and Crane was unfairly assessed eight frickin strokes, the fact he noticed them on the first hole (and felt compelled to notified officials) does kinda put the onus (anus!?) on him to pay the freight.