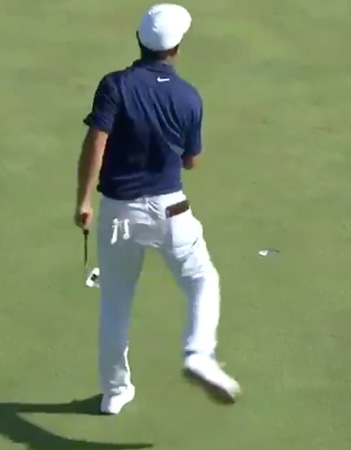 Korn Ferry Tour (formerly known as Web.com) delivered some excellent late drama for those players vying to get their coveted PGA Tour cards. I lamented the ending of the daunting six-round torture chamber Q-School but this was good watching. Several had putts to make in order to advance.

Here is UT alum Doug Ghim who needed a birdie on the final hole.

“I’ve never felt nerves like that before,” said Ghim, who played in an NCAA final, was runner-up at the 2017 U.S. Amateur and low amateur at the 2018 Masters. “I’ve been in a lot of nervous situations. The only way I’d be devastated is if I had a putt to make it and didn’t make it, and that thought occurred when I got there. After all I went through throughout the whole season, to have a putt to make it is wild, and even wilder to have it go in, so I can’t even quantify in words what this means.”

Chris Baker needed to 2-putt the last hole to get his card. This after a 3-putt double-bogey on the 17th hole. Understandably, he left the first nail-biting distance short. He had toiled on the Tour for seven season, never earning an invite to the big show. But his birdie snuck in the right side to curl in. Hello Greenbrier this week!

GolfWorld’s Ryan Herrington summarizes the big day for most and a sad one for several.

Richy Werenski made birdies on the 15th and 16th to finish tied for seventh for the tournament and move from T-53 to T-24 in points.

All told, just one player who started the day inside the projected number fell out of the top 25 (Jose de Jesus Rodriguez).

Then, there’s the excruciating case of Justin Harding as Brentley Romine reports.

Justin Harding entered the week 13th in Finals points before missing the cut. The South African then watched as two players already with cards, Grayson Murray and Lanto Griffin, struggled down the stretch to bump Harding out of the top 25. Griffin double-bogeyed No. 17 to move Werenski and Trahan past Adam Svensson and into T-25 in the projections, and then moments later Murray bogeyed the last to move the pair past Harding, who dropped from No. 24 to No. 26. Harding then watched as Griffin lipped out a short birdie putt at No. 18 that would’ve bumped him back inside the number.

After all that, Harding missed his card by .125 points.