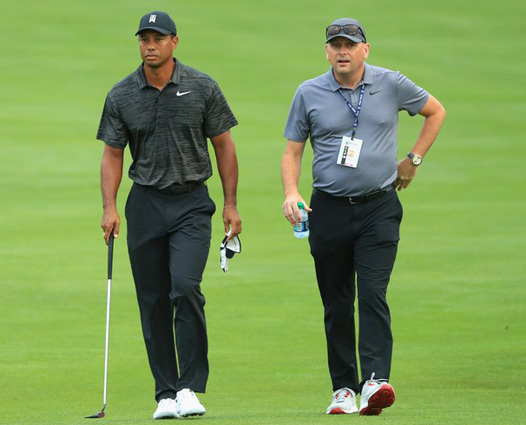 Anytime a new figure is seen by Tiger Woods’ side, it makes news. The latest “discovered” addition to Team Tiger is Rob McNamara, officially a vice president for TGR Ventures. But he’s also Eldrick’s quasi-swing coach.

GolfDigest’s Alex Myers has the details of the mystery man.

That second role has become especially important with Woods no longer employing an official swing coach since Chris Como.

“I mean he knows my game,” said Woods, who estimates the two have played 500 rounds of golf together. “One, he’s a good player. Two, he’s got a good eye and he has seen me go through changes and iterations in the game of golf, but at the end of the day I try and use Rob for what I’m trying to work on now, because right now it’s different, because I’m limited what I can do, and not only am I limited in what I can do, I’m limited in how much I can practice.”

“Because I’ve played with him so much and practiced with him so much over the years I kind of know what it should look like or what typically he’s trying to do,” said McNamara, who played collegiately at Santa Clara and began working on Tiger’s IMG account at 25. “And a lot of it this last year is Tiger is typically telling me, ‘Hey, I’m feeling this. Will you just watch and make sure I’m not doing this or I am doing this?’ Then all I’m doing is kind of quickly confirming it for him, yes, and then kind of backing away.”