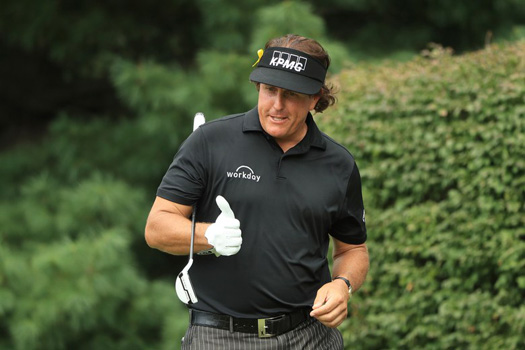 Phil Mickelson has played on the PGA Tour since 1993. Amazingly, he’s never reached the #1 World Ranking. But there’s another stat that Lefty is very close to achieving for the first time ever in the next two weeks.

GolfWorld’s Alex Myers has the details.

With two tournaments remaining in his PGA Tour season (At No. 9 in the FedEx Cup points list entering this week’s BMW Championship, Mickelson is assured of also playing in the Tour Championship in two weeks), Mickelson is on the verge of leading the tour in strokes gained putting for the first time in his career. Mickelson is currently No. 2 in the category, gaining .841 strokes per round. A final-round 63 at the Dell Technologies Championship — and gaining 1.143 strokes putting for the week at TPC Boston — helped him close the gap on Jason Day, who leads at .862. Greg Chalmers is No. 3 at .790.

Since the stat’s inception, Mickelson’s putting has improved dramatically. From 2004 to 2011, he never finished better than 40th in the category, including a worst showing on the greens in 2011 when he ranked 144th at -.190. However, since then, he’s only been out of the top 40 once, and barring something crazy over the final two weeks, this will be his third time ranking in the top 10 in SGP since 2013.

“There’s a number of areas in my game that, if I look back 10, 15 years ago, I feel like I’m significantly better,” Mickelson said on the Dan Patrick Show in March. “Certainly, I’ve gotten a ton better at putting.”

Share: Phil Mickelson Can Accomplish Something Statistically Notable For The First Time