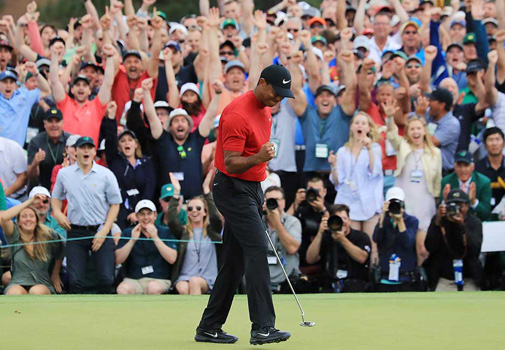 Call me mildly surprised–at least in equipment sales. I know Tiger drives apparel merch but there’s a reason Nike left the equipment biz. Now, maybe they left a bit early? I’m going to say no. Work what you know and Nike knows apparel.

According to CBS, the final-round coverage and encore presentation was seen by 37.2 million viewers, a 41 percent increase from 2018’s live-only coverage.

He estimates the effect of Tiger winning to be north of $550 million at the bare minimum, a $100 million increase over last year’s victory by Patrick Reed, which was tracked by GumGum in 2018.

The Masters tweets out video of the final putt from the champion each year. Reed’s winning putt from 2018 has been viewed 393,000 times.

The company has even switched production lines to produce more of Woods’ model ball in anticipation of increased demand. Consumers can now purchase the same model Woods uses in tournament play, with “TIGER” stamped on the side of each ball.

That ball, the Tour B XS, will be made available to consumers later this week and has already sold out to the retailers who purchase directly from Bridgestone.