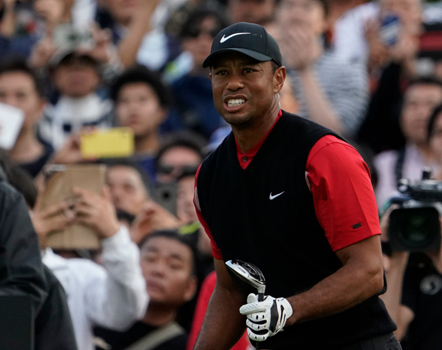 Tiger Woods finally caught Sam Snead’s long time mark for most career wins by going wire-to-wire (1st time since 2007!) at the ZOZO Championship. Some worried about his mending knee and back during the long rain delays. But he survived playing 27 holes Saturday (or was it Sunday?) before closing the 3-stroke lead with 7 remaining.

Although, to me it didn’t seem like the normal Woods’ gushing–at least on non-golf platforms. I didn’t even see it on Sports Illustrated’s main front page.

Anyway, what was crazier was Tiger starting out with three bogeys in the opening round before ending with a three-fairways-hit 64! Amazing.

“It’s just crazy. It’s a lot,” Woods said. “I’ve been able to be consistent most of my career. … Today was one of those days where I was able to pull it out.”

10: Number of seasons Woods has won at least five times, a PGA Tour record. Snead is No. 2 on the list with eight five-plus win seasons.

8: Number of times Woods has won his first event of the season, the Zozo victory bumping him from seven. For comparison, Rickie Fowler has five PGA Tour titles total in his career.

2: Number of times Tiger hasn’t won when holding at least a share of the lead after 54 holes. He has converted 46 of 48 of these chances, a staggering 96 percent.