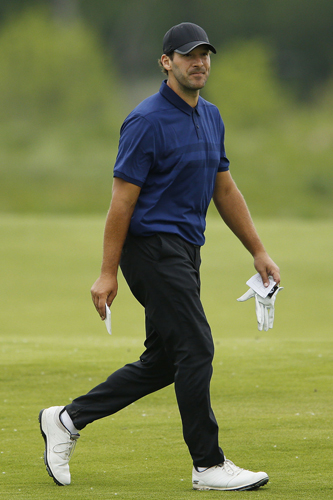 Tony Romo had it going on early in his round Thursday at the AT&T Byron Nelson. Chipping in for eagle on the par-5 7th put him at 2-under! Not too shabby. Plus CBS/GolfChannel was bouncing back and forth between him (he was the first golfer shown when the broadcast began) and the Jordan Spieth featured group including Henrik Stenson and Hideki Matsuyama.

The wheels did shoot off a bit after he doubling the 9th and posting a 40 on the inward nine to end +5. Still, Romo held up for a bit and had nearly the entire Dallas Stars team following.

GolfDigest.com’s Alex Myers has the details.

A Trinity Forest member, Romo, 39, is making his third PGA Tour start. He previously missed the cut at the past two Corales Puntacana Resort & Club Championship by a combined 33 shots, most recently in March when he shot rounds of 79 and 80.

Thursday’s 76 was Romo’s lowest round on the PGA Tour and he beat four players in the field of 154 while tying three others, including former World No. 1 Luke Donald. Sure, it came on his home course and he trails leader Denny McCarthy by 13, but it was still pretty impressive for the retired NFL star.

Had the sound of watching @attbyronnelson on @GolfChannel and saw a guy lash his 2nd onto par 5 and didn’t know who it was. @tonyromo has a nice move! So cool that guys like him and John Smoltz get to play. I am fan of celebs playing.

Here are his first round stats.