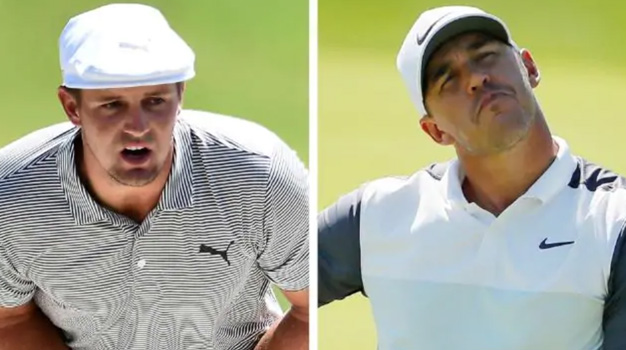 There’s nothing like a public spat of marquee players to pull back the curtain and motivate the governing powers to admit and rectify a troubling situation. Seriously, social media justifiably gets slammed for being far too negative, but it’s also a great vehicle to prevent companies from hiding behind their corporate walls, rather than taking significant steps to fix an unpopular aspect of their trade.

The spat between Bryon and Brooks is merely the latest symptom stemming from the virus of slow play. Let’s face it; slow play sucks. It robs the game of momentum and flow. Go to a pro tour event in person (or college tournaments which are even worse) and try to endure watching with rapt attention while the snails play a round in five hours plus. I certainly can’t do it and I’m in the business of covering the sport.

GolfWeek’s Eamon Lynch writes about how DeChambeau, while certainly an easy and justifiable marquee target, isn’t the only culprit of dragging their ass around 18 holes.

A visibly irritated Bryson DeChambeau approached Ricky Elliott, caddie for Brooks Koepka, on the practice putting green and asked Elliott to tell his boss to make any comments about slow play “to my face.” Koepka arrived on the range a few minutes later. “I have no problem saying anything to anyone’s face,” he said evenly on receiving the message, and after completing his warmup wandered over to DeChambeau for a chat that appeared civil on the surface.

It wasn’t your typical playoff drama, and one the PGA Tour won’t welcome.

There are few easier targets for mockery in golf than DeChambeau, from the pseudo-scientist marketing that implies he understands golf on a level his peers cannot, to the single-length irons that cast him as golf’s Galileo breaking from conventional wisdom, to the flat cap that looked cool on Hogan but which on him is dismissed as a poseur’s prop.

Two videos of him were subjected to forensic analysis worthy of the Zapruder film. In one, DeChambeau took an eternity to miss an 8-foot putt. In the other he paced off a routine pitch shot with all the haste of a senior citizen with bunions. It was all the social media firing squad required to empty its chambers.

It’s not as though DeChambeau is idling alone in the slow lane. Messrs. Holmes, Na, Crane, Cantlay and Day are among those deserving of mention. But the intense reaction to DeChambeau’s dawdling ought to be of concern to the PGA Tour.

There is plenty of blame to go around when it comes to slow play.  Chiefly it belongs with the slowpokes who treat fellow competitors with a discourtesy that verges on unsportsmanlike conduct. We can also indict Tour rules officials who are too trigger-shy with the stopwatch, who enforce a system that imposes meaningless fines but not more impactful stroke penalties.

anyone need a nap?

here’s DeChambeau pacing off a 70-yard shot which took over 3 minutes to hit (couldn’t post the entire video it took so long) pic.twitter.com/7A3Azeftyu

“I play a different way out there. I take my 40 seconds that’s been allotted, sometimes over, absolutely. Totally agree. It’s maybe 5 percent of the time. But I’ll tell you that it’s really kind of unfortunate the way it’s perceived because there’s a lot of other guys that take a lot of time. They don’t talk about this matter, and for me personally, it is an attack. … People don’t realize the harm they are doing to the individuals.–DeChambeau

“There’s a deeper issue here, and I’m somehow being singled out.”

This latest slow play yammering will only benefit if the suits in Ponte Vedra are finally embarrassed enough to do something significant. Publicly post and shame slow players. Invoke penalty strokes. Multiple infractions should earn suspensions as do P.E.D. takers. It’s high time this all leads to a meaningful solution and not just patting everyone on the head and pretending it’s not happening.