For those readers who are keen followers of the PGA Tour, do you get the impression that while the technology used by leading instructors to coach top professional players has become increasingly more sophisticated in the past decade, more fit, young players are becoming inconsistent and/or injured? What do you suppose is happening?

The fact of the matter is, while coaches and players are trying to incorporate more science into the golf swing, they are stuck in past misconceptions and are, at the same time, working on partially researched new concepts. New concepts come from the laboratories of a few professors pursuing golf biomechanics research, so that while one might study foot-ground interaction patterns another might study what the hands do – no holistic studies are taking place which assess the entire swing. To illustrate this point better, let’s have a look at our very own Texas transplant and Southern Methodist University physics student, Bryson DeChambeau.

Last year – 2016 – was his rookie year on the PGA Tour. His main swing philosophy for the year was to have a single plane swing going back and down, no matter what. This single plane swing is an older concept, whose efficacy has never been scientifically proven. 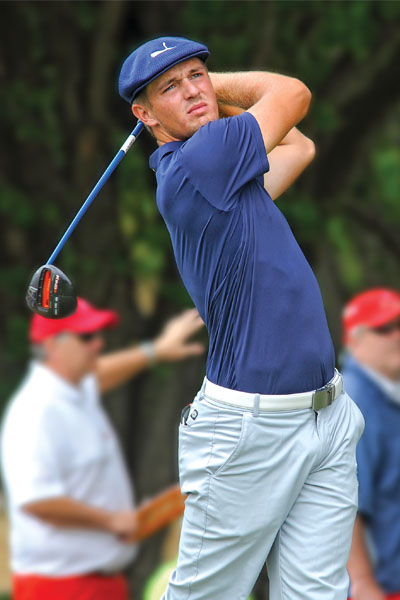 Upon meeting up with Bryson (at the Tiger Woods Foundation’s Genesis Open, which took place at the Riviera Golf course in Los Angeles in February this year) one could not resist asking, “Now, with one full year’s experience under your belt, is the single plane still your priority number one or has that changed?”
Bryson replied, “It’s certainly changed, it’s now minimizing closure rate – that’s the new frontier. Whose new frontier? Mine.”

What a wonderful, wholesome golfer with a great sense of humor and a lot of daring. But what is he talking about, and what does the term “Closure Rate” even mean?

“Closure Rate” refers to the speed with which the clubface rotates shut through impact. Minimizing that would increase a player’s margin within which to make mistakes. After all, if the club face was opening or shutting quickly, it is quite likely the club would make contact while the clubface was not square. Conversely, when closure rate slows down, contact is more likely to be made with a square face. Bryson is using all the latest technology to monitor his new theory – a Flightscope doppler 3D radar launch monitor which measures his club and ball movement, and the relatively new and very scientific product “My Swing,” which uses sensors to measure body positions and accelerations.

Although when asked what exactly he is doing to achieve his aim, Bryson laughingly said, “If I told you I’d have to kill you.” But from watching him practice, it is obvious that Bryson is keeping his lead (left) arm very straight until the top of the backswing and then, in the downswing, bringing his right shoulder forward in an exaggerated motion to facilitate a further maintenance of the straight lead arm, so that it, and the club along with it, does not roll over or close too quickly.

While the theory is absolutely spot on, the modus operandi has not taken into consideration the most important aspect of the golf swing – the human performing it. Bryson does not realize that the exaggeratedly forwardly placed right shoulder (known as a protracted shoulder) in fact positions his trail (right) elbow in a very awkward position, making it difficult to straighten at impact.

So how might Bryson – or you the reader – incorporate some useful anatomical concepts into the golf swing? Keep the trail shoulder behind and below the lead shoulder until impact. In other words, be sure to never let the trail shoulder (the right shoulder for a right-handed player) be in line with the trail toe, but always slightly behind it, at impact.