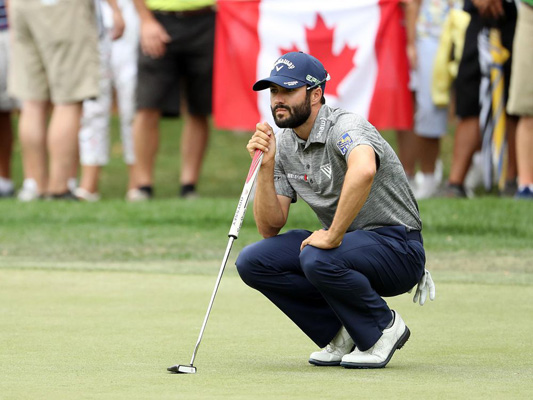 Adam Hadwin joins Scott Stallings by openly wondering if he’d continue play if certain COVID-19 rules are in place during Tour events. The The Tour’s 27th ranked in Strokes Gained has issues with leaving the flagstick in while putting.

I get that a golfer’s (especially for Tour calibre players) competency is all about comfort levels and omitting as much indecision and doubt as possible. Yet (again) those who are mentally tough and can persevere thru mental roadblocks are more apt to succeed than those who lean on excuses why their play suffers. In addition, everyone will have to adapt–so at least its a “level” playing field.

Golf.com’s Josh Berhow reports on why Hadwin appears to throw up the white flag without even giving it an honest chance.

“Are we not going to be allowed to touch pins, or flags?” Hadwin said. “I putt with the flag out, so if we all of a sudden are going to be forced to putt with it in to not touch a flag, I’m going to have issues with that, and that might make me honestly rethink playing, because it changes everything.”

Pressed on the subject, Hadwin, who ranks 27th in Strokes Gained: Putting this season, said he has tried putting with the flagstick in and doesn’t like it. Putting with the pin in has been allowed since the beginning of 2019.

“Maybe there’s one person wearing gloves walking with every group that pulls flags for us when we need to so caddies or players aren’t touching it,” Hadwin said. “If you force us to play with the flag in it changes everything. It messes me up on the greens and I can promise you I’m thinking about it. Doesn’t matter how well I’m hitting it; when I get on the greens I’ll be thinking about it, how I’m putting with the flag in and I haven’t been able to adjust to it and I shouldn’t have to adjust to it. Maybe I’ll protest, maybe I wouldn’t. If that’s the only possible way for us to play again, I don’t know, maybe. Maybe I’ll play and moan about it every day that I play and just go do it. Hopefully it doesn’t come to that.”

Not a bad idea, but wouldn’t it be best to prepare and adjust rather than publicly give up?