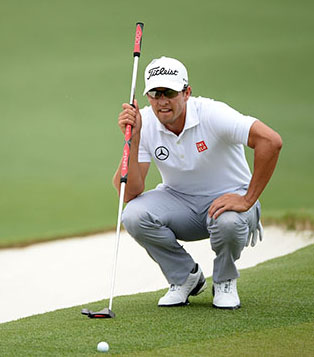 Adam Scott misses his long putter binky. So much that he’s planning on adopting the controversial putting stroke (sure looks like anchoring) that Bernhard Langer and Scott McCarron utilize on the Geezers circuit.

Does he worry about peer backlash? Golf Australia’s Martin Blake provides the answer.

“Yeah, I think I might give it a run this week. I haven’t done that much work with it but it feels pretty good out there. Yeah, I think it might make the grade this week, definitely feel very comfortable with it.”

He did not mention that both Langer and McCarron have suffered worldwide criticism for their use of the implements, and accused of anchoring.

“I’ve just noticed like everybody else that Bernhard Langer and Scott McCarron make everything they look at and have done since the anchoring ban and moving it away from the body,’’ he said. “So it was actually pointed out to me that this year they both recorded the best ever putting stats since stats have been kept.  Both of them beat the old best.  You know, I don’t know if it’s just a coincidence or if they had just a really good year, but maybe they’ve found the best way to putt.’’

Scott never believed that long putters should have been banned; in fact he argued the case personally to the R and A at an Open Championship. When the ban on anchoring was introduced by the R and A and the USGA, he sent his long putter to the R and A’s retiring secretary, Peter Dawson, as a memento.