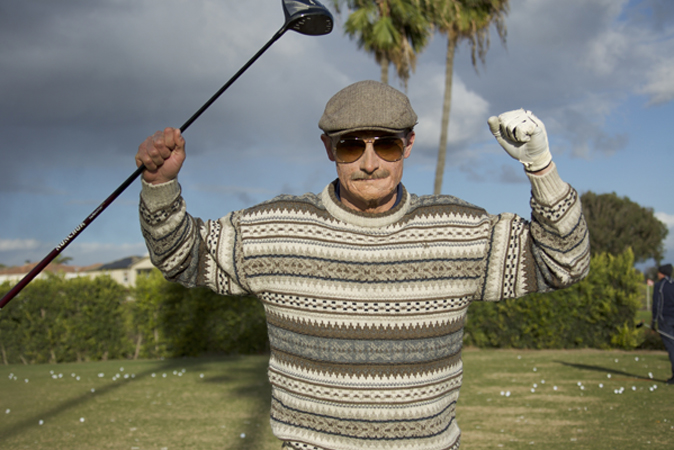 Two-time long drive champion Jamie Sadlowski can launch the pill over 400-yards. So, his club sponsor came up with idea for the 29-year-old bomber to put on some believable old man makeup and watch onlookers go nuts watching a geezer bang balls over four football fields with a Cleveland Launcher HB driver.

Its a pretty good prank as you’ll see here.

Ever seen an 80-year-old grandpa hit a 400-yard drive?
You’re about to… #GrandpaJamie pic.twitter.com/5qeeQoJSCV

GolfWorld.com’s E. Michael Johnson caught up with Sadlowski and grilled him about the stunt.

That looked like a fun thing to do. How did it come about?

Cleveland had the idea and they rolled around with it a bit with my agent. When they finally came to terms they pretty much told me what we were going to do and to start preparing. I didn’t have much say, but I thought it would be fun. And it was once I got out of my shell.

Have you ever seen Kyrie Irving’s Uncle Drew?

I have. I watched a lot of those and they were funny. I’ll never be a great actor but I watched those videos just to see what he did and took some cues from his voice and some different mannerisms. They were well done and funny and I was hoping we could do the same.

How long did the makeup process take?

It took about five hours. It was pretty grueling and then to take it off afterwards took about another 90 minutes. It doesn’t happen overnight. I don’t know how actors in Hollywood do that every day for months on end as they shoot their movies. That’s beyond me. It’s not easy to deal with. That said, I was stunned by the transformation. When they first put the face mold on and other pieces it looked good, but once they did all the small touches and final makeup, the nose hair, the dots, the mustache, it was very meticulous.

Did you pattern any of the mannerisms after anyone you know?

Being a grumpy old man is almost protocol at country clubs and I’m a country club guy so I’ve seen those guys that go out at 7:30 in the morning to get out before everyone else and are pretty set in their ways. So I think some of that came out. Also being around my grandparents and seeing how cranky my grandpa can be was good material.

Did anyone catch on pretty quick that it was you?

When I first got to the range I sat down behind a young kid who was hitting balls and his younger brother was there and he kept staring at me. I was messing with his brother for a little bit and then walked away and he followed me. After I hit a shot he asked me, “Are you Jamie?” and of course I said I had no idea what he was talking about. But he said he had only seen one swing like that and that was Jamie Sadlowski’s swing. So yeah, he knew right away from the golf swing. He was only 13 so he must have watched a lot of YouTube videos.

It’s weird when you are in character Sadlowski said. There were some times when I would realize I was walking normal and be like, “Oh man, I have to walk slowly, use my cane and be a bit of a jerk to people.” But for the most part I was able to stick with it. If there’s a “Grandpa II” I’ll do a better job.

Again, its a pretty good prank. Golf could use more of them.