Former CBS Golf and NFL Executive Producer Lance Barrow grew up outside of Fort Worth, attended Abilene Christian University, and has lived in Fort Worth most of his life. He now plays golf and has lunch  as a member at Colonial Country Club regularly and travels in retirement with his wife.

But he will always be remembered for his role at CBS for three decades at the Masters Tournament, starting off as a spotter for legendary broadcaster Pat Summerall and retiring as executive producer after the 2020 Masters.

While he had a small part in the famous TV golf movie Tin Cup, “thank you for remembering, now go rent the movie so I can collect more royalties,” he said, and produced one of the most watched Super Bowl’s of all time, Super Bowl 50, he always had the Masters on his mind.

With the 2022 Masters ready to begin with a full-sized gathering of Patrons for the first time in three years, and Barrow in retirement, watching it on CBS like millions, he was happy to talk to Avid Golfer Senior writer Art Stricklin about his Masters memories. 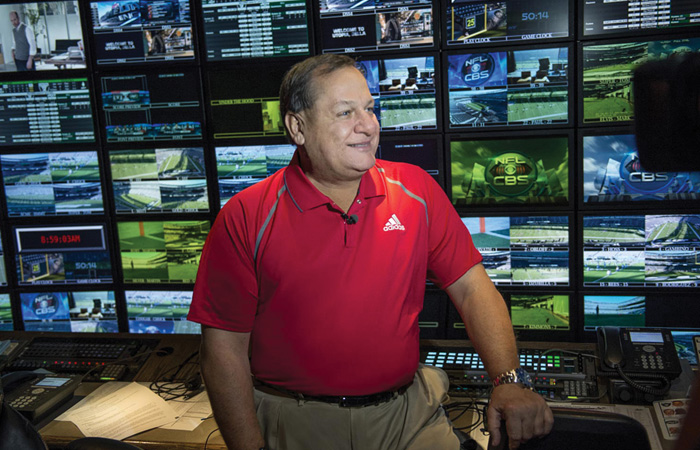 AVIDGOLFER:  What was it like to be associated with the Masters for so many years at CBS.

AG: How did you get started with CBS and golf?

LB: I went to school at Abilene Christian and played football there and I had a friend who told me, that CBS would sometimes hire college kids to work during the Colonial tournament near where I had grown up and had been to dozens of times. So I showed up at one Colonial and got hired as a weekend worker/gopher spotter for the tournament.

AG: Did you know anything about golf?

LB: Sure, I had been a caddy and loved golf, been to a lot of Colonial tournament and knew the game and the course. Then they ask if I had worked TV before and I think I said yes (laughs)

AG: When did you start full-time

LB: I when to work in 1997 working as Pat Summerall’s spotter and progressed my way up the ladder, as an associate producer, and then on up. I did a lot of events, but nothing was like the Masters.

AG: Augusta National is famous for only issuing a one-year contract to broadcast the Masters on CBS and retaining complete control, once disinviting Gary McCord to be a part of the broadcast for some of his comments. When did you know CBS was coming back to broadcast the next year’s Masters.

LB: I don’t think it was ever anything formal, at least not that I knew. When it got to be in the fall, and I hadn’t heard anything., I just assumed we were coming back for another year. I just didn’t want to be the executive producer that lost the Masters on my watch, that is for sure.

AG: Do you have a favorite Masters?

LB: Well, I guess I could say seeing Texans like Ben Crenshaw win after the death of his teacher Harvey Penick or Jordan Spieth who I watched as a junior, but really nothing will ever top the 1986 Masters when Jack Nicklaus won his 6th Masters title at age 46.

LB: I will never forget Pat Summerall with tears streaming down his face as Jack and Jackie come off the green arm and arm. Then we cut to the patrons and they are crying and hugging each other because they can’t believe Jack is going to win again so long after last win.

AG: What was it like to be inside the production truck during that Sunday round.

LB: I wasn’t the executive producer then, just the assistant, but sat next to the man who was, a very famous pioneer of the craft, Frank Chirkinian, who was very direct and know for his bombastic ways.

LB: Well, Jack started several shots behind after the final day and he makes a front nine birdie and then another one, and I told Frank, “Jack is making a charge.’ He turned to me and says, ‘Jack Nicklaus is not part of the final day, we focus on leaders here and he is not one of them.”

AG: What happened next?

LB: Well Jack makes another birdie early on the front nine and I reported that to Frank. He says, “son I thought I taught you better than that. Jack Nicklaus is not part of this Sunday story and I don’t want you to mention his name again.” Then he used several words they didn’t teach me at Abilene Christian.

AG: What about the back nine charge?

AG: You also produced Tiger Woods, epic 12-shot win in his first Masters appearance, what was that like?

LB: I was the executive producer then and I just told the crew, this is going to be a very long and possible historic day. From the time he arrives, we are going to focus on Tiger and everything he does during his round. As we were doing rehearsals, there was a knock on the trailer door and it was Jack Stephens, the chairman of Augusta National Golf Club. He said he just wanted to make sure we had everything we needed for the final round. He never came by for any other tournament, so I knew it was a big deal.

AG: The Masters Tournament is the championship of nothing, but why has it endured over these decades?

LB: I think it’s just the history and tradition. The same, scenic site. The rules, the regulations, the winners. It’s the greatest golf tournament in the world. When I was at CBS, I would think about it 365 days a year.