“Ouch, I have a catch in my back,” I said recently. “How come?” responded a friend. I said it is from testing out the various putting postures our very own DFW hero Bryson DeChambeau has been seen all over the internet using in recent weeks. I thought I even saw one where he appears to be standing astride the golf ball! Mostly, however, his new and “work-in-progress” putting stroke looks like this: his toes and body face the hole; the ball is placed to the right side of his right foot (as he’s right-handed); his upper body leans forward considerably; his right hand holds the long putter low on its handle and his left hand holds the right hand and putter.

Being a physics major, DeChambeau is obviously enamored with the idea of a pendulum (exactly like the one on a grandfather clock) which swings on a single plane so that its arc bottoms out effortlessly at the same spot, every time. Many golfers and golf instructors like to use the principles of physics for the golf swing. In fact, the term “biomechanics” (ie. physics applications to human movement) is probably the biggest buzzword in golf today. Another scientifically researched aspect is that the putting movement is more reliable when a golfer looks at the target rather than at the ball, which DeChambeau’s new posture obviously allows. 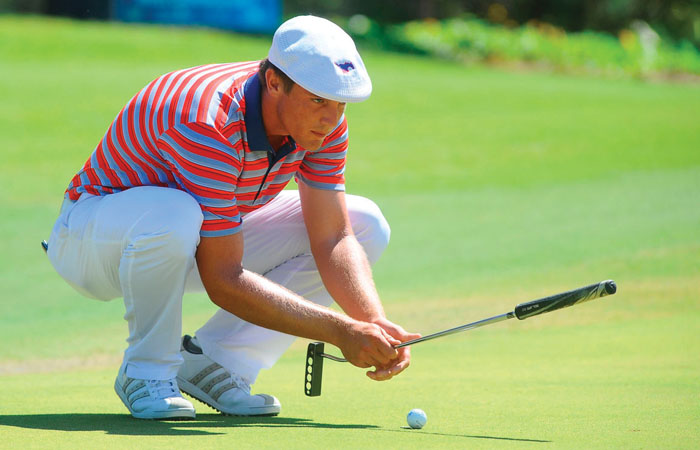 So DeChambeau, probably wishing for a pendulum movement (now that the long, anchored-to-the-torso putters which were designed specifically to create a pendulum stroke are illegal) was probably looking for ways to somehow make a pendulum movement without any anchoring. He obviously knows that a true pendulum movement is not possible with the typical putting stroke because it is made using two arms which are at some distance from the centrally rotating spine. This causes a shift from a single plane and thus the scope for inconsistency.

While the pendulum movement is most appealing in theory, in putting it is actually both a blessing and a curse. It is a blessing because of the repetitive nature of the movement which guarantees a putter’s lowest point will always be at the exact same spot on the ground; which is precisely what makes it a curse. Wouldn’t it be safer to have an arc with a shallow, almost elliptical, base so there is a greater chance of the putter catching the ball somewhere in the approximate location of to its lowest point, rather than precisely there?

Moreover, the pendulum stroke has an ever greater problem given the “bio” aspect of “biomechanics,” in other words the human joint-and-muscle aspect. A pendulum is suspended by a rod which runs perpendicular to it and allows it to swing on a precise, vertical plane. The single human shoulder (when the other one is practically eliminated from the situation as DeChambeau is attempting) has what is known as an “instantaneous” axis of rotation, which changes as the arm moves into different positions. So, even standing sideways to the ball and holding the putter mainly in one arm, does not create a true pendulum.

Finally, both bending forward excessively so the left arm does not hit the belly during the backswing, or twisting the torso around for the same reason, can both create the “ouch” situation I started out discussing! The twist and/or the excessive forward bend are not ideal for the human spine!