Set among large coastal dunes, magnificent granite cliffs, desert foothills and white-sanded beaches at the tip of the Baja peninsula, the Quivira Golf Club offers more ocean front exposure than any other course in the immediate area. This emerald nestled alongside the rocky desert beaches of Mexico is Jack Nicklaus’ sixth design in Los Cabos.

Nicklaus had to dig deep into his bag of design skills to find a way to accomplish the one-of-a-kind course on a site that once served as the location for the movie, “Troy.”

“If you were asked if you would like to have this as your choice of sites, you would say ‘no,’” he mentioned after the course was selected as the Golf Inc. 2014 Development of the Year. “You’d probably say, ‘Can we find something a little easier to work with?’ But sometimes you get a site that says, ‘this is our land.’

“We had to help the golf course emerge from the natural terrain we had to work with. I thought it was a very challenging yet spectacular piece of property. Much of it is located on the side of a hill and although there were many opportunities (to place golf holes), we had to find them. Even though we found them, they still required an awful lot of effort to make certain that they work and that they remain stable.”
Based on my sixth trip to the tip of Baja, Nicklaus accomplished the “wow” factor he wanted and built a spectacular course with some stunning panoramas, creating some unique holes like Nos. 5, 6 and 13 where the greens are perched on jagged cliffs, leaving little margin for error with the ocean waiting below for errant shots.

Just when Quivira was getting ready to open in the fall of 2014, Hurricane Odile slammed into Los Cabos, blowing tons of sand onto the newly planted fairways and greens. Quivira’s partner resort, Pueblo Bonito Oceanfront Resorts, had up to a 1,000 of its employees raking sand for three days and saved all the grass or otherwise would have had to spend millions of dollars to start over.
Quivira was the first development in Latin America to ever be honored by Golf Inc. and was named that same year as Golf Magazine’s best new international course. 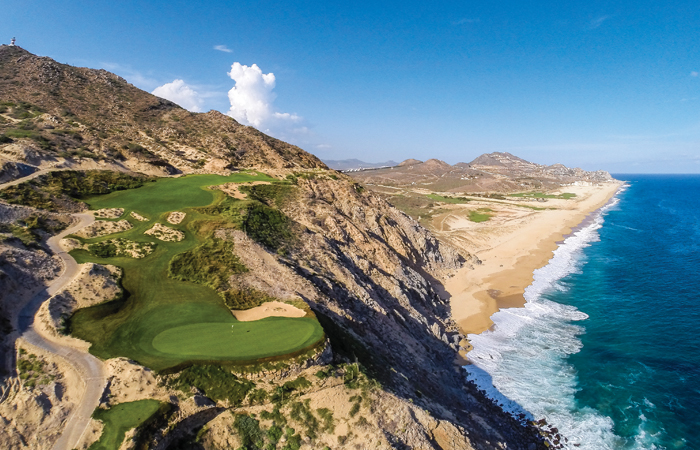 After playing the first four holes at sea level, players climb from 50 feet above sea level to 285 on a cart path for almost a mile to get to the fifth tee. From there, they see a green 310 yards away, tempting them to try and make the heroic shot to the green. From the blue tees at 288, one of the travel writers I was playing with made it, despite gusts of 10 to 15 mph into his face off the Pacific Ocean. A day earlier, my best effort from the same blue tees ended up in the water. The safer route is to play down the fairway on the right and still have a “nervous” downhill wedge shot into the narrow green, with only a slim bunker keeping the ball out of the ocean if you hit it too far. My approach shot landed a yard short of the green and ended up 12 feet from the hole, but I failed to make the putt. My playing companion two-putted for his birdie.

The par-3 sixth, playing from 95 to 180 yards, is carved into the base of a massive dune to the right with the green perched on a cliff high above the ocean and a secluded beach. Playing into the prevailing wind, I took a 4-iron from 165 yards and went straight for the pin, leaving myself a 15-footer for birdie. Two other players got good bounces off the hill to the right and ended up on the green also. None of us converted, however.
The 13th plays to a shelf-like small green that sits atop a massive pinnacle of sculptured granite. It’s shorter, playing 85 to 148 yards, but still requires a do-or-die short iron where anything to the right ends up lost or on the beach below. There is a bail-out area to the left where the ball will bounce toward the green as one of the other guys playing with me discovered.

The 12th, the longest hole on the course that can stretch to 635 yards, was the one that gave me the most trouble, mainly because of the blind second shot. I never could get into my mind just where the blind shot needed to be aimed, hitting into the sand dunes on the left both times. I wished that the dunes had been marked as penalty areas where you could have just taken a one-shot penalty and dropped where the ball entered them. Instead, I had to mark down double bogies for handicap purposes.

The uphill, 90-degree dogleg 14th requires a good drive to reach the end of the fairway to avoid having a blind shot to the green. The same guy who reached the fifth green cut across the sand dune to the right and again ended up on the green. My wedge flew too far and he and I were both on the upper level of the green—a place you do not want to be. To avoid putting the ball off the green, I just putted to the left to have a second putt from 15 feet. He aimed to the right and just got the ball to the crest and it ended up left of mine. Director of Golf Antonio Reynante told me at dinner the first night that work would be done to take out some of that slope to make it more playable and give them more available hole locations.
The fairway on the par-5 15th is the highest point on the course at 380 feet above sea level. You then get a downhill par 4 with the fairway 100 feet below you on 16 before finishing up with a pair of long par 4s. Even after good drives, I couldn’t get home with my longest hybrid in the rental set of TaylorMade clubs from the blue tees at 440 and 401. A 5-wood might have turned the trick for me. The green on the 18th sits right next to the beach and features a deep trough at the back that can make putting or chipping from the front more difficult. 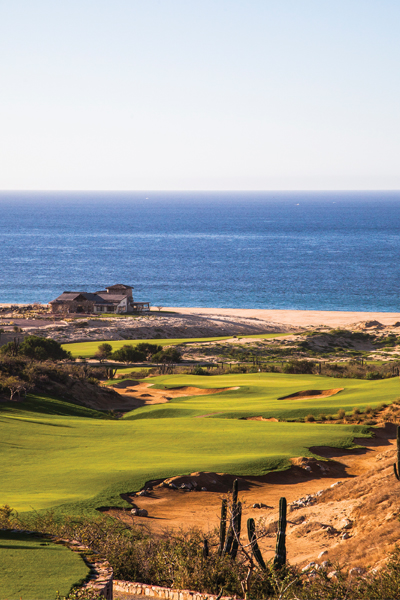 During the round, golfers can refresh themselves with complimentary food and refreshments at four comfort stations interspersed throughout the all-inclusive facility. The halfway house between the eighth green and ninth tee, called the “Oasis,” showcases exceptional Baja cuisine.
It does usually take five hours to play the course because of the distance between tees, the stops at the comfort stations for drinks and food or to take photos of the jaw-dropping vistas.

Quivira was created as an exclusive amenity for owners and guests of Pueblo Bonito Oceanfront Resorts, which consists of eight properties dispersed between Los Cabos and Mazatlán, including the adults-only The Towers of Pacific where our group had the privilege of staying.
It’s a resort within a resort with 47 Club Level guest rooms and suites with private terraces plus six suites with private plunge pools and a majestic Presidential Suite. Among the amenities there was personalized 24-hour butler service. It was nice to have my bags unpacked, but I really didn’t use my butler that much because of the time spent on the golf course. I did enjoy using my room key to visit the Peninsula Lounge Bar for breakfast and to view the dazzling sunsets.

The sister Pueblo Resort Sunset Beach property features a unique “The Market at Quivira,” offering an enticing array of food with open seating.
For those wanting to spend more time and buy property, the Copola Residences offer one-, two- and three-bedroom hacienda-styled condos as well as custom homes while the Coronado Residences have a selection of 68 single single-story multi-bedroom homes overlooking the ocean and hole Nos. 1 through 4 and 18.

The resort is located only 10 minutes from downtown Cabo San Lucas, which features plenty of lively nighttime activities. Guests wanting to swim in the ocean take shuttles here as swimming is not recommended back at the other properties for safety reasons.
The airport is about 40 minutes away and many guests just take one of the transportation services like EPIC Travel coming and going rather than renting a car.

One parting word of advice is to remember is that you cannot take souvenir golf balls back with you in your carry-on luggage as one of my other golf travel writers discovered on a previous trip. Put them in your checked luggage. However, feel free to bring back as many memories from your time in paradise as possible.