North Texas isn’t just experiencing a boom in growth, it’s a full-on explosion. From the epicenter of Dallas spreading to the outlying suburbs, such as Plano, Frisco, Allen and McKinney, businesses from all over the country are flocking to this newly formed corporate Mecca and setting up shop. Toyota, Liberty Mutual, JP Morgan Chase and Bank of America are joining the likes of Hewlett-Packard, Dr. Pepper Snapple Group, Ericsson and a plethora of others headquartered or officing in the Plano area.

The gradual influx of thousands of new employees and their families over the past two decades created a market for entertainment, retail and dining in the suburbs, eventually leading to the Shops of Legacy in 2000, but one group – the Moon family – thought they could up the ante and provide something even better: a full-service luxury hotel. In July, that idea became a reality, with the opening of the Renaissance Dallas at Plano Legacy West.

David Moon, the CEO and founder of Sam Moon Trading Co., had always dreamed of two luxuries in his life: owning a golf course and a hotel. Moon, who raised his family in North Texas after emigrating from Korea in 1971, fulfilled his first goal in 2005 after the purchase of Coyote Ridge Golf Club in Carrollton. However, the dream of hotel ownership remained steady throughout his career.

“Originally, it was back around 2011 or 2012 when they were going to start [a hotel project],” said Mandy Bredeweg, General Manager of Coyote Ridge Golf Club. “I think, just in general, with all the things going on, all of it was put on hold [until now], but I’ve heard them talk about it since I’ve started with them at Coyote Ridge.”

In 2013, the Moon family, sons Sam and Daniel included, started to seriously explore entering the hotel business. The Moons’ roots in the Plano area was their ground zero for finding a suitable location for their luxury project.

“Our family has lived in the Plano area for decades” Daniel Moon said. “I personally went to school at Plano Senior High, and my parents lived in Plano … We are, needless to say, very familiar with the area.” 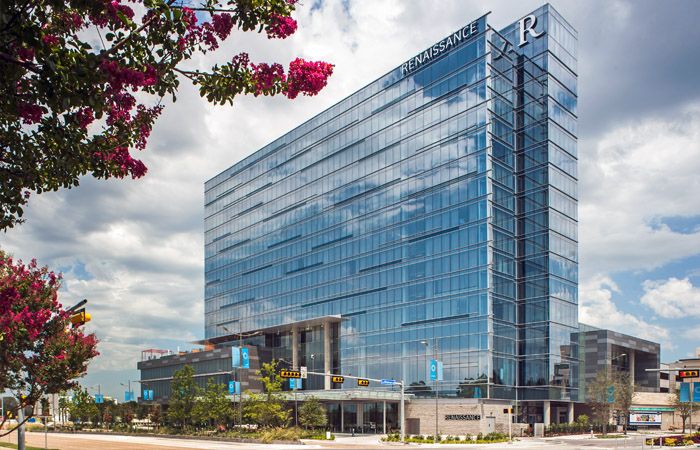 After Plano’s highly successful Legacy Town Center debuted in phases in 2000 and 2001 and continued to grow for over a decade, the land west of the project became a prime focus for developers. The area, now dubbed Legacy West, attracted the Moon family and spurred them to meet with Legacy developer Fehmi Karahan. Upon hearing that a hotel prompted the growth of The Shops at Legacy almost 20 years ago, the Moons thought this was their chance to make their family’s dream of hotel ownership a reality while also contributing to the success of the new development.

“When [Karahan] developed the original Shops of Legacy, the Marriott hotel that is in there kicked off that development,” Daniel said. “He liked all the traffic that a full-service hotel brings in day one to help out the restaurants and retailers.”

Once they agreed a hotel would be a great cornerstone for the Legacy West development, the Moons set out to find a management company, an architecture firm and design style that would suit their needs.

The Marriott brand sparked the Moons’ interest early on in the process, thanks to the state-of-the-art reservation system as well as the ability to get creative in their design. The Renaissance flag of the Marriott brand also intrigued them because it fit perfectly into their dream of a luxury lifestyle hotel where they would be able to contribute into the final design.

“The Renaissance flag requires something unique about the hotel. Every Renaissance needs to be different. It’s a new program they’ve been doing for the last 10 years that every new [property] needs to have its own unique identity,” Daniel said.

To create the unique identity required of a Renaissance property, the Moons sought premier architecture firm HKS to design the building and Dallas-based Looney & Associates to handle the interior. It also helped that HKS designed the JW Marriot Los Angeles at L.A. Live, the hotel the Moons wanted to model their own after.

Once the beginning stages were completed, the last thing the family and designers had to decide on – and perhaps the most important – was the theme or design they wanted throughout the hotel.

“We had to choose our own style, so we decided as a family that since we’re Asian and it was announced that Toyota was moving their North American headquarters into Legacy West, we thought an Asian-themed hotel would be very unique to this area,” Daniel said. “Then, because we’re in Dallas, Texas, and it’s a little Western, we thought a Western blend or fusion would be good; an East-West fusion.”

The project designers at Looney & Associates crafted the term “West of Zen” to describe the theme’s blending of Eastern and Western cultures into one cohesive concept. Once the theme was settled both the Moons and their designers set forth to put their West of Zen idea into each and every detail of their hotel. 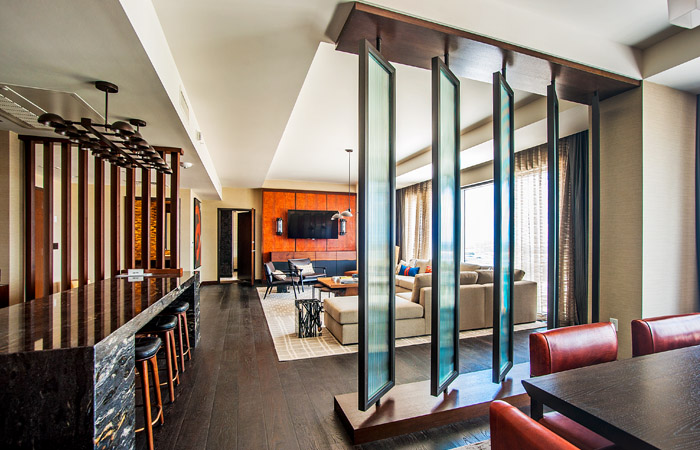 The Renaissance brand’s requirements for each of its properties are boiled down into the three Is: intriguing, indigenous and independent. In other words, each hotel needs to fulfill its own unique theme or concept by implementing local elements to balance out more ubiquitous design trends. The goal is to immerse guests in a luxury environment that is inspired by the world outside the property instead of sequestering them inside of it through theme and nuance.

“It’s supposed to create things that make you look and then look again,” said John Klukan, the hotel’s director of sales and marketing. Klukan has worked under the Renaissance brand for many years, and still enthusiastically points out every single detail like he’s just seeing it for the first time.

Robert Bula, the general manager of the Renaissance Dallas at Plano Legacy West, has worked in the hotel industry for almost four decades and has seen many hotels up close, but he is still floored by the amount of attention spent on each aspect of the Moons’ hotel.

“I’m blown away by the amount of thought and detail that was put into this project. They had an unbelievable vision and executed it perfectly,” he said. “It has such a good story behind it and is so on brand.”

The brand begins when you first set foot inside and glance upward at the chandelier: Austrian crystals are suspended into a glittering formation in the shape of a half-moon, a subtle yet appropriate homage to the Moon family. Take a few steps forward and you’re greeted at reception: two chic black counters are placed in front of an abstract scribbled glass art piece. If you get the details from Klukan and look again as urged by the Renaissance motto, you’ll see the glass isn’t just an art piece; it’s the flight patterns out of DFW Airport. The reception desks? Reclaimed metal from two local water towers.

One of the highlights of the show-stopping lobby and reception area is the brightness of the space. Floor-to-ceiling windows make up the entirety of the exterior walls, letting natural light enhance the intricate details throughout the first floor. In addition to the custom seating arrangements sprinkled near the Navigator check-in table (Navigators are the Renaissance brand’s version of locally focused concierges), the first floor contains a full-service restaurant, OMA, a tea house with grab-and-go fare and a bar, Whiskey Moon.

OMA, the Asian-fusion restaurant, is brimming with eye-popping details and continues the local focus. The restaurant showcases both single and communal seating as well as a peek into the open-style kitchen. As with the rest of the property, there are direct connections to the East and West.

“There’s such a local tie,” Bula said. “The communal tables in the restaurant were made to resemble Asian fans, but they were made for us in Burleson. Everything is unique and everything was made for them. Absolutely nothing in this hotel is cookie cutter.”

Take a few steps farther into the private dining room and you’ll see the custom vinyl wall material is not just a busy dynastic print; the traditional Asian pattern has been replaced with Dallas cultural markers such as Big Tex, a longhorn, the Texas Star Ferris Wheel, the Margaret Hunt Hill Bridge and a host of other local commonalities such as armadillos, cacti and natural scenery.

Perhaps the most interesting hangout space is the bar area, Whiskey Moon. The rich dark browns of the reclaimed wood along the bar front harmonize with the leather ceiling detailing. If you glance upward, the “paneling” is actually a collection of leather belts pieced together side by side. The designers took the rustic-meets-luxury feel one step further and hung branding irons underneath the leather ceiling; each branding iron is significant of a specific ranch in Texas. 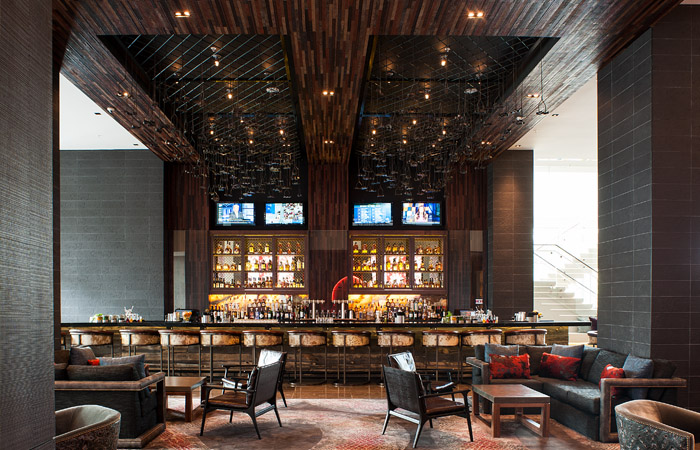 With the business clients taken care of, the Moons and their designers didn’t want to leave out those travelers wanting a more leisure-focused stay. The hotel features a state-of-the art fitness center, spa, and a resort-style pool with chic cabanas and full-service dining and bar area. The location at the entrance of the Legacy West shopping center also provides an incomparable walkability to upscale shops and other eateries.

But one of the biggest perks is the access to Coyote Ridge Golf Club.

The Moons’ other property is a mere nine miles from the hotel, and the family wants to merge their concepts into a full service stop for the avid golfers and newcomers alike. Guests looking for a tee time at Coyote Ridge will enjoy free shuttle service to and from the golf course as well as premier rates for tee times and rental clubs.

“We are now starting to create these kind of packages,” Daniel said. “We will make it an easy experience for anyone interested in playing golf who is at the hotel; maybe they hadn’t thought about playing golf but they can sneak in a round whether it’s nine holes after their meetings all day and not have to worry about anything.”

The Moons are also in a unique position as Coyote Ridge Golf Club draws a large banquet and wedding business. The hotel and golf club partnership will serve guests at the hotel looking for a hassle-free round but will also serve the out-of-town wedding parties looking to utilize Coyote Ridge’s banquet space.

“We especially have a lot of bridal parties who come to us and ask, ‘Where can we stay? What’s a nice place where we can stay that’s not too far away?’” Bredeweg said. “I think possibilities are pretty endless of the things we could do now.”

The hotel began taking guests and held a small ribbon cutting on July 10, but the grand opening is slated for Sept. 8. With the end of the construction phase completed and the rewards ready to be reaped, Daniel Moon momentarily stepped out his role as one of the project managers and back into the role of son.

“One of the most important things about this hotel is that it’s the last piece of my dad’s goals and aspirations in life from the business end,” he said. “Now that this is fulfilled, it’s such a great feeling for not only himself but our family. We’re proud that we’re able to accomplish all of these things during his lifetime.”