How Robert A. Hudson became the hero of the 1947 tournament

Perhaps you’ve been thinking about the Ryder Cup, witchcraft, Ben Hogan, and exploding whales. I know I have.

These oddly linked topics came together for me at green, serene Portland Golf Club, a jewel-like acreage in Oregon’s largest city. PGC owns an underappreciated but vital history with the Ryder Cup, and an intriguing place in the life of Hogan. Since I hold myself out as an expert on the Cup and the man, having written books about both, I was invited to talk to interested members. No need to memorize a speech, said General Manager Lonnie Lister. We’ll just have Paul sit up there with you and ask questions.

Paul Linnman, that is, who is Portland’s best-loved and most respected television journalist, and recently retired. Back in 1970, Linnmann’s Channel 2 producer ordered him to get a car and a cameraman and hasten to a tiny coastal town, to cover said tiny town’s crisis: a whale had washed up on its beach. It was 8 tons of stink. Someone called the authorities to get rid of the damn thing.

The elements of great TV had coalesced: the Oregon Department of Transportation, a new car, a dead whale, and 20 cases of dynamite. “The blast blasted blubber beyond all believable bounds,” Linnman told his viewers. He titled his memoir, natch, The Exploding Whale. I read it and recommend it; Amazon’s got it.

Linnman pitched Ryder Cup questions to the alleged expert, but everyone in the room knew more than me about the most crucial moment in the Cup’s history, which was right after World War II. Due to the hostilities, the biennial all-star match hadn’t been held for ten years. It was the American’s turn to host, but, simply put, the Great Britain side couldn’t afford to come. They were still rationing food over there, and virtually every European economy had been devastated. Up stepped smiling Robert A. Hudson, a PGC member who’d made good in the food business. Hudson volunteered his club, his time—he’d be tournament chairman—and a lot of his money. He underwrote every expense for team GBI, from the Queen Mary from Liverpool to the cross-country train to the Great Northwest and back again. Plus hotel, food, and entertainment costs, even the remuneration for the caddies—all on Mr. Hudson’s dime. It’s no exaggeration to say he saved the entire enterprise.

A chap named Max Faulkner was a stalwart member of the visiting team. “What Hudson did was marvelous,” he said. “He did everything and would not accept a penny back. We wouldn’t be talking about the Ryder Cup today if it wasn’t for him.”

Hudson had also caused the 1944 and 1945 Portland Opens to be held on his home course, providing a welcome bit of prize money for the players on the sputtering War-time tour. That was when Portland fell in love with Hogan, and, apparently, vice versa. The Little Man, as his peers called him (but not to his face) squeaked out a win in ’45—by 14 shots. They held the PGA Championship at Portland Golf Club the next year. Hogan won. The Ryder Cup came along in ’47, led by its captain…Hogan. Team US won 11 to 1. 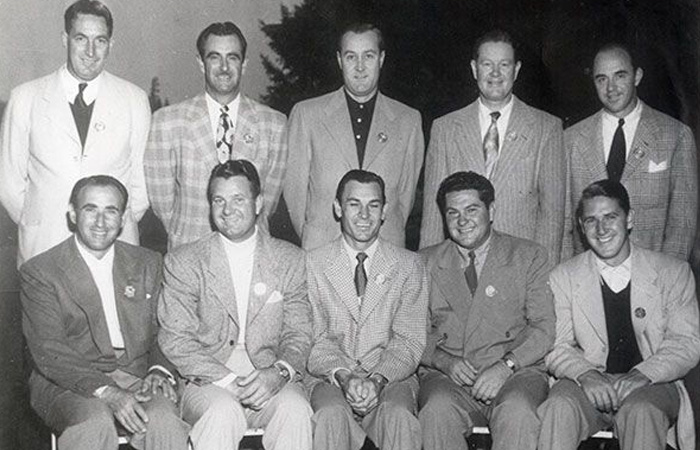 Not for the first time, I heard that the Hawk had looked into moving to town and starting an equipment business. But no: Valerie—the Mrs.—didn’t want to leave Fort Worth.

I played a round on PGC’s lush gorgeous ground and tried to keep my ball between the sequoias. It’s a mature course, opened 1914, and a ton of fun. “Here’s Hogan’s plaque,” said tech entrepreneur Louis Machuca on the third tee. “You’re away,” said Jerry Cundari. He’s the club’s greatest-ever golfer. “My daughter wrote a book,” said Eric Weber, the owner of an insurance agency. He sent a copy to me. Brigid, by Courtney Weber, is a study of the Celtic goddess of the same name. There’s a lot of interesting witch-crafty information, such as recipes and directions for various Brigid-based charms, magic and spells. There’s one that involves bacon. I’m going to try it.

Share: Wayward Shots – The Man Who Saved the 1947 Ryder Cup