Just about every avid golfer has put head to pillow at least once in his life and dreamt about putting a tee in the ground at Pine Valley, hearing the sound of a well-struck iron shot echo through the hundred-foot-tall pines that cradle Amen Corner or hitting a shot out of Oakmont’s famous church pew bunker.

Sadly, for most of us, these dreams will never become a reality. Pine Valley, Augusta and Oakmont are places reserved for the mega powerful. The über wealthy. The upper crust. However, for less than a C-note, there is a local alternative, and though it may not be the exact same as walking through Butler Cabin on the way to the first tee, Tour 18 in Flower Mound is fun, challenging and allows even the average Joe to test his luck on replicas of some of the most famous holes in American golf.

When Tour 18 first opened in 1995, it was the bee’s knees. Everyone wanted a piece of the course. In fact, the demand was so high, they used a No. 1 and No. 10 tees shotgun start. In the 22 years since the course introduced us to some of the most intriguing designs across the American golf landscape, not much has changed. It’s still a thrill to see how you will fare on the island green from Sawgrass or the 18th at Doral’s Blue Monster.

No. 1 is one of the few holes the average golf fan may not be as familiar with. Taken from Cherry Hills, this hole is where Arnold Palmer drove the green in the final round of the 1960 U.S. Open to come from seven shots back and claim his only U.S. Open title. For those of us who weren’t around back then, this one is a downhill short par 4 and a great chance to put a wedge in your hand to start your round off right. No. 8 from Baltusrol and the always dangerous 18th at Doral come next, before you hit the first par 5 of the round: the 15th hole at Crooked Stick, better known as the site where John Daly burst onto the scene with his 1991 PGA Championship win as a ninth alternate.

Cue Winged Foot No. 10 and Medinah No. 10 before you come to the seventh hole, which uses the same water that was on the left side of the 18th at Doral earlier in the round. On the way back, that water now makes up the left side of the 18th hole from Harbour Town: a hole that plays a muscular 470 from the championship tees. Things don’t get any easier, as the eighth hole is a replica of the difficult dogleg right 16th hole from Oakland Hills.

As you turn back toward the clubhouse, you reach one of the most famous (or infamous) par 3s on the planet. The ninth at Tour 18 is the island green from the Stadium Course at Sawgrass. Mind you, this isn’t a tremendously long hole. In fact, it’s probably not much more than an 8-iron for the majority of golfers, but water surrounds the green on all sides, so anything just a little off is likely going to result in splashdown. If for some reason you catch this one on a breezy afternoon, expect some serious puckering, if you catch my drift. A severe undulation in the green makes even those shots that do find the putting surface tough to convert for a three.

Oakmont’s “church pew” hole and the 12th from Southern Hills make up Nos. 10 and 11. The 12th is one of the most interesting designs around, modeled from the sixth at Riviera, a par 3 that has a bunker in the middle of the green. A trip to the top-rated course in the country awaits at the 13th. Pine Valley’s 17th hole is not as recognizable as some of the others you see at Tour 18, mainly because this mysterious New Jersey track has never hosted a major championship. This hole has plenty of character, with a large waste area guarding the right side of the fairway and short of an elevated green. 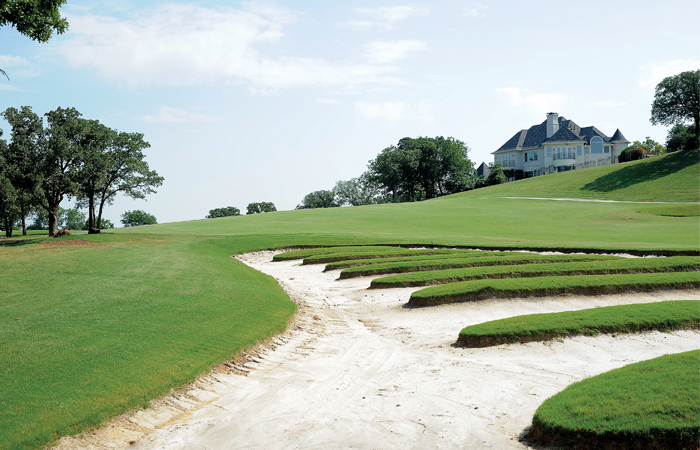 Up next, you’ll stick a tee in the ground for the longest hole on the course: the 625-yard behemoth par 5 that replicates the 16th at Firestone. It’s a true three-shot par 5, but it’s relatively open, so you can swing away on your first and your second. No. 17 from Muirfield plays as the final buffer before the Amen Corner finish.

As you step to the 16th tee (No. 11 at Augusta), you really don’t get a sense that you’re about to play one of the most famous holes in golf. However, once you arrive at your tee shot, you’re reminded by the large white scoreboard just behind the water left of the green. The trick to this hole is being able to control your golf ball. If you find the fairway, the steep right to left slope will promote you rolling a hook right over into the drink. So, you essentially must hit a cut from a ball above your feet lie (for right handed players). If you walk away from this one unscathed, you need to buckle up for another fun experience, and that’s the 12th at Augusta.

This par 3 requires distance control. You need to carry a small creek, but too long, and you have a nightmare downhill bunker shot. Although the trees in proximity to this green don’t promote swirling, impossible to judge wind like the original, it’s still no cakewalk.

To finish the day, you walk to the tee box of “Azalea,” Augusta National’s signature par 5. One look at this hole, and you can see why lefties have so much success on this one. Your Bubba Watsons and Phil Mickelsons of the world can hit a mega cut around the sharp dogleg and get very little roll out of it. For righties, the hook you need to play around the corner can be hard to stop and can easily find the creek down the left side. The good news is, if you do find the fairway, you’re likely going to be 200 yards or less into the green. It’s a good opportunity at birdie to finish.

It’s no secret that greens across the Metroplex have struggled over the last few years. Multiple courses in the area have had difficulty maintaining their putting surfaces with the floods of 2015, and rogue heat waves and cold snaps left courses scrambling over the last couple years. Tour 18 also saw their share of issues, and as a result, the course suffered. However, after some TLC, the greens are once again in good shape and roll the way course management has always wanted them to. When we visited, the greens were in rock solid shape. They were lush, rolled well and certainly showed no signs of the struggles from mid-summer 2017.

The one lingering issue with Tour 18 is the bunkers, which could use a little updating. Luckily for fans of the course, management is in the process of securing a bid for a complete overhaul of the sand traps on the property. With an early 2018 green light projected, the new bunkers should be ready for play by the time the course starts to see consistent play in the spring.

Tour 18 may not be Southern Hills, Riviera or Winged Foot, but it is a ton of fun. It is a fantasy camp for adults. As a kid, I’m sure you always imagined yourself hitting that walk-off homer in the World Series or scoring the game winning touchdown in the Super Bowl. Think of this in the same vein, but now you can test your luck against some of the most discernable holes on the face of the Earth. Just try your hardest not to rinse a sleeve on the island hole. 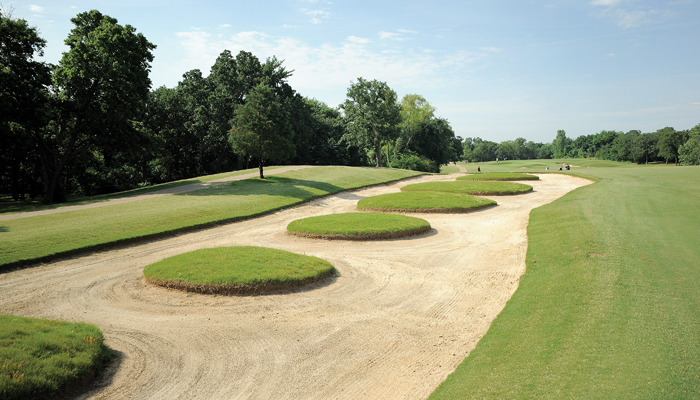 Toughest Hole: No. 10 (Oakmont No. 3) 425 yd. Par 4. This hole features arguably the most recognizable bunker in U.S. golf, this one is better known as the “church pew hole.” A massive gilled bunker of sand, earth, sand, earth, sand, earth guards the entire left side of the landing area. It’s so visually intimidating, you try your hardest to focus elsewhere. However, there are several bunkers down the right side that cut the fairway basically down to nothing. If you do manage to find the short grass, an awkward uphill second awaits to a large green that has three-putt written all over it. There’s a reason Oakmont is often called the “Oakmonster,” and this beast is a big part of it.

Favorite Hole: No. 17 (Augusta No. 12) 155 yd. Par 3. Okay, okay. So, sue me. I love the “Amen corner” finish at Tour 18. The 17th hole is a re-creation of what I consider to be the most famous hole in golf, Augusta National’s “Golden Bell.” Even though there aren’t gigantic pine trees framing the hole like in Georgia, you still get a sense of what the best of the best face when they stand on that tee box. It’s not a long par 3, measures just about 150 depending on the tees you select, but the intimidation is there. Narrow green front to back, the bunkers ready to collect anything long, and the creek that runs in front ready to systematically drown golf balls if they catch an inward gust of wind at their apex. It’s a cool visual, even though it’s not the real McCoy.