In December 1992, Golf Magazine came out with a brand new concept for the golf swing, which took the golf world by storm. It was termed “The X Factor,” and was first discovered and explained by famous instructor Jim McLean. The X Factor is the difference in horizontal rotation between the upper torso and the pelvis at the top of the backswing; or, in simple terms, the creation of a large shoulder turn versus a restricted hip turn. It is said to give golfers greater ball velocity and driving distance.

McLean discovered this “Factor” when he observed that the five longest hitters on Tour at the time had a maximum separation angle between pelvis rotation (minimum) and torso rotation (maximum) and that the converse was true for the five shortest hitters. 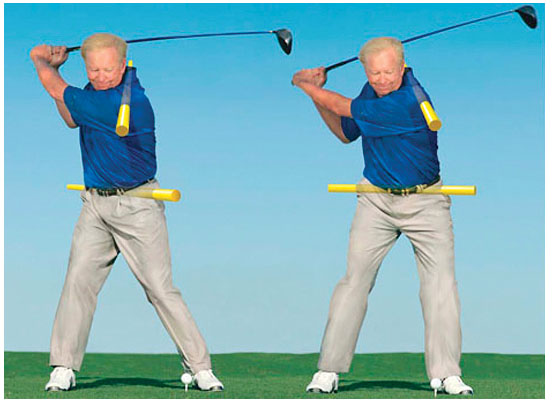 And thus began a swing movement which changed the typical golf swing of the day (“Classic”) to the “Modern” one, induced many researchers fascinated by the idea of more ball speed to research the concept, and perhaps birthed the single biggest contributor to injury on the PGA Tour. The X Factor is a popular concept to this day and is often discussed on Facebook golf forums and among golf-swing technique lovers.

So what has research found about both the efficacy and the injury potential of the “Modern” golf swing, which incorporates the X Factor concept? Firstly, once researchers began to consider the idea, they decided the concept had merit and was worthy of further study because it is well known that stretched muscles (the big torso muscles) are able to contract more forcefully, so that once the backswing torso rotation stretches them, they can produce greater downswing speed of body rotation and thus club speed.

Many, but not all, studies were able to correlate greater X Factor with greater club or ball speed and driving distance. One highly mathematical study used three different methods to measure the X Factor in 3D (after all, all human motion takes place in three planes at the same time) and found no correlation between X Factor and clubhead speed, regardless of the method used to calculate X Factor.

It is important for the reader to note that the key word here is “correlation”. A correlation does not imply a “causation,” so just because greater X Factor was seen in a small sample of golfers at the same time as greater ball/club speed, it does not mean that a greater separation angle of shoulders and hips at the top CAUSES greater ball speed. Some other factor could actually cause the greater club speed, such as the innate ability for speed in the golfers studied.

Regarding injury, one study – a review of many preceding research papers on the X Factor – explained that the Modern golf swing increases load on the spine from both the excessive torso rotation and the side bending.

No scientist has ever considered two major factors that make the X factor more harmful than useful. The first is that all golf swings, regardless of whether they are Classic or Modern or any other, allow the trail side of the torso to become higher than the lead side at the top. This stretches the main muscles of the torso in an upward direction, so that when they contract in the downswing, they do so in a downward direction, leading to the trail shoulder moving forwards and downwards towards the ball for an over-the-top impact with large loads being placed on the spine.

The second never-before considered factor is that the big pelvis is not designed to turn efficiently when the two legs are stable and planted on the ground. The socket (acetabulum) of the pelvis into which the “ball” of the femur fits is somewhat smaller in diameter that the femur so that rotation is not easy unless the femur is positioned to allow easy rotation. Little wonder then that professional golfers who wanted to move less in order to try for better consistency and thus kept the lead foot planted during the backswing could not rotate the hip and could only rotate the torso!

To Factor or not to Factor in one’s backswing, that is the real question? The answer? Not. Find a swing which is based on scientific rationale and an understanding of how the hip joint works, and know that a hip-plus-torso rotation, if correctly managed during the backswing, can create more club speed during the downswing, while being much safer for the back, for all skill-levels of golfers.