But after a few days of doing this on a regular basis, you will find out the Sah wah dee khaa (which sounds like much like, “buddie ha,” to the Western golfer’s ear) is one of the secrets to the ever-pleasant surprise that is Thailand golf.

The courses and clubhouses are much nicer and more advanced than you ever expected from this small Asian nation that was once only known for its connection to the Vietnam War and its less than moralistic off-course activities.

The people are generally friendly and happy to see you, the courses are very well-maintained with western architecture familiar to most American golfers, the scenery is spectacular and the prices are reasonable, if not downright concessions-at-Augusta cheap.

No, you can’t get an egg salad or pimento cheese in the clubhouse – sushi and seaweed wrap are the preferred choices along with a few Snickers bars – but due to the currency exchange rate between the Thai baht and the American dollar, there is hardly any course in Thailand more than $100 for traveling golfers. You can add a standard $11 tip, about 500 baht, for your all purpose, all-helpful caddy, a couple of cold drinks in the thankfully air-conditioned clubhouse and you have an unforgettable international golf experience with a low budget and high memories.

It’s no wonder, with the government crackdown on golf courses in China and the overbuilt glut of courses and golfers in Korea, that longtime international golf teacher and world golf traveler David Leadbetter recently called Thailand the next Asian golf hot spot. Plus, with Olympic Golf coming to Asia for the 2020 Summer Games, the time is certainly right to focus on this unheralded golf gem of a country and its varied green grass offerings. 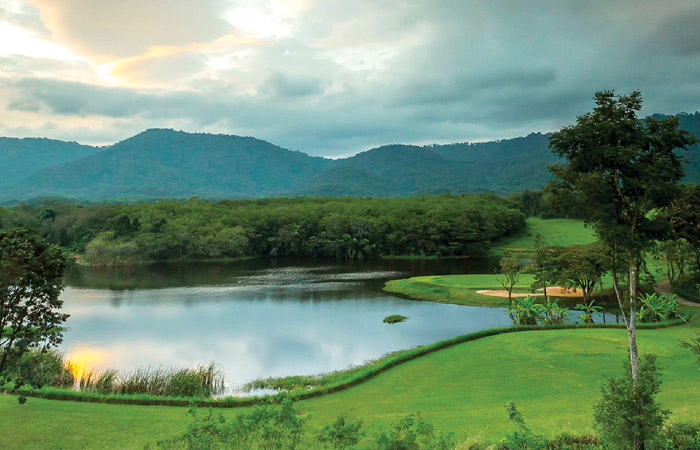 There are currently 262 golf courses in Thailand spread over three distinct regions of this small nation: the mountains to the north, the capital area of Bangkok and the Phuket area by the Gulf of Thailand and Andaman Sea, which has fully recovered from the devastating tsunami a decade ago.

By far the highest concentration of courses are the 60-plus courses circled around the massive, 16 million population in the thriving capital of Bangkok.
Ayodhya Links, a private layout just north of the capital, was recently named the first-ever Thailand entry into the World Top 100 by Golf Magazine, but there is a treasure trove of top designers and great public access courses all around the capital, 30 minutes to an hour from the tourist hotels in downtown Bangkok, depending on the ever present Bangkok traffic.

But, if you want to avoid the chaotic Bangkok traffic, or you’re starting your trip somewhere else before heading to the capital, the Kirimaya Golf Course designed by Jack Nicklaus is an excellent place to start.

It’s located near the original national park in the country, Khao Yai, and its location gives it a remote forested look. Nearly every hole on the par-72 course is surrounded by trees or brush, making sure you can’t see any other hole from the one you’re on and gives you 18 individual green grass challenges.

The conditions at Kirimaya are top-notch, and with the Khao Yai mountains in the background and the national park nearby, the scenery is spectacular as well. There is little water that comes into play, except on the par-4 10th hole, but the Nicklaus course plays 7,170 yards from the back tees, so you’ll need to hit it as far as the Golden Bear to be able to take advantage here.

Another outstanding feature comes to the left of the par-4 18th hole where there are a half-dozen luxury tents lining the fairway. You can stay in the high class villas with tented tops and deep soaking tubs plus big screen TVs, then walk over to the clubhouse for another round at the course or maybe dinner and drinks indoors or outdoors on the wooden pond side patio.

As you move closer to the major city there are dozens of top quality courses to play including the 27-hole Mountain Creek golf course designed by Spanish golf legend Seve Ballesteros, his only design in Thailand, which contains the Creek, Valley and Highlands nine-hole courses.

You will also find the Greg Norman-designed Thana Golf and Sports Club, which also includes tennis, swimming, soccer and a spa with a huge clubhouse.
One must-play course in the Bangkok area is Thai Country Club, not only because it is one of the best conditioned and challenging courses in the country, but because it’s also one of the most famous. Tiger Woods won here in his only Thailand appearance to honor his Thai-born mother in 1997.

It’s a bit jarring to see how young and thin Woods looks in the huge photo holding the Asian Classic trophy at Thai CC, but the clubhouse is filled with lots of memories of Woods, Vijay Singh (who won in 1998) and Gary Player, who gave a junior clinic here and was awarded an honorary membership.

Trimmed scrubs and tall trees line many of the holes at the par-72 course that plays 7,097 yards from the back tees. There is plenty of water and dozens of deep bunkers making this one of the toughest tests and the host of more male professional events in Thailand than anywhere else.

There is even a plaque on the 10th tee box inviting you to drive the green on the dogleg left hole like Tiger did in ’97. Like most things he accomplished on the golf course, mere mortals have little chance to achieve it.

The 18th hole has water all the way down the left side with the huge clubhouse behind the green, so while you’re unlikely to repeat Tiger’s scores or shots, you can at least wear a red shirt and pretend wave to the crowd.

Another very interesting layout nearby is the Royal Gems Golf City. It showcases the power of Western golf as the first nine at the course features replicas of some of the most famous courses in the U.S. and Europe including the Church Pews hole at Oakmont, the Island Green at TPC-Sawgrass and the short watery par 4 at The Belfry in England.

The back nine is an exacting replica of the back nine at Augusta National Golf Club, minus the extreme elevation changes and the super slick greens. But for millions of Asian golfers and many American visitors, this may be as close as they ever get, and they’re thrilled for the chance to play so many famous holes.

Of course, at this layout, like most in Thailand, the female caddies are the stars of the show. In short, they do everything for you from driving the golf cart, to teeing up your ball, if needed, retrieving your tee after you’ve hit, carrying your clubs to the fairways, carrying them back when you’re finished, marking your ball and scoring and making sure you have plenty of chilled water for the conditions.

English may be lacking, but smiles and service never are, and after getting used to having somebody else do so much for you, it’s a very relaxing way to play. Just don’t try to carry your own club back to the cart after you hit as I discovered, as they will quickly grab the club from your hand for taking away their job responsibility. 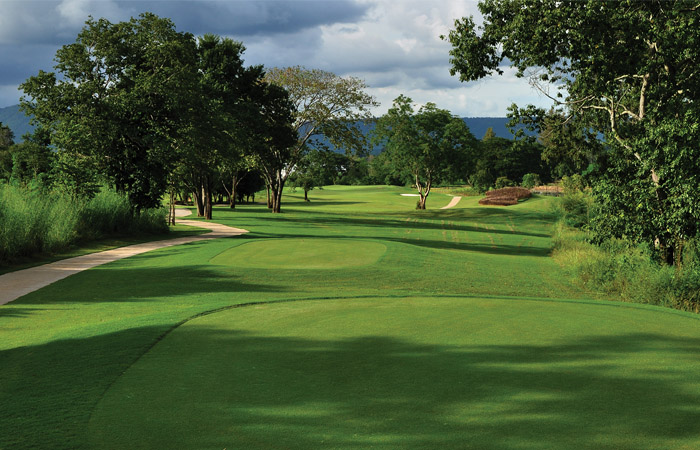 It would be a shame to be this close to one of the world’s most exciting capitals and not spend plenty of off-course time here. If you haven’t been, the best way to describe it is a combination of New York and Las Vegas, minus the casinos, jammed together, drop in some San Francisco Chinatown and make sure each of the 16 million residents has a car, bike or some other mode of transportation.

A sensory overload doesn’t do it justice, but it’s certainly a visit to remember. There are hundreds, if not thousands, of street food vendors and all forms of entertainment and relaxation vying for your attention along with the steady stream of blaring street traffic.

The Sirocco at State Tower claims to be the tallest outdoor restaurant in the world and certainly offers plenty of 360-degree stunning views from its alfresco dining area 63 stories above street level. It was also the location for the movie “Hangover Part II.” There are also plenty of rivers to explore, luxury shops to visit and a wide selection of your Buddhist temple du jour.

Traveling to Thailand is time-consuming as there are no direct flights from anywhere in the U.S., meaning a full day to arrive and depart and the weather has that certain August in Houston quality to it.

For more information, go to www.golfasian.com or Tourism Thailand with offices in Los Angeles and Bangkok at www.tourismthailand.org.

Share: Bangkok, Thailand — The Gem of the Far East