The Bridges Golf Club in Gunter is the only Fred Couples’ design in the great state of Texas. So, if you want to play a course “Boom Boom” had his hands on, then you might consider making the hour drive north from DFW to check out this par-72 layout.

Couples collaborated with noted designer Jeff Brauer to complete the architecture, and the result is a beautiful, rustic course that combines some great, scorable holes with some that will challenge even the best players. When the course opened for play in 2008, the area north of Dallas was just beginning its rocket-propelled ride to a population boom, the likes of which have rarely been seen in North Texas. As development spread out of Plano, north to Frisco, Allen, McKinney, and then even farther north to spots like Prosper and Celina, the rapidly expanding population has now begun to creep toward the once-isolated property.

The opening hole at the Bridges isn’t necessarily a precursor for things to come. It’s a relatively rudimentary hole that promotes a left-to-right ball flight but can be a tough tee shot for those who tend to lose shots right. There is a lot of deep fescue in that direction, but find the fairway and there is little more than a short iron in remaining.

No. 2 is a challenging par 3 that plays significantly uphill to a difficult green. At right around 200 yards from the tips, this one will challenge the best ball-strikers, and should you miss the green on the wrong side, it will also challenge the best putters. 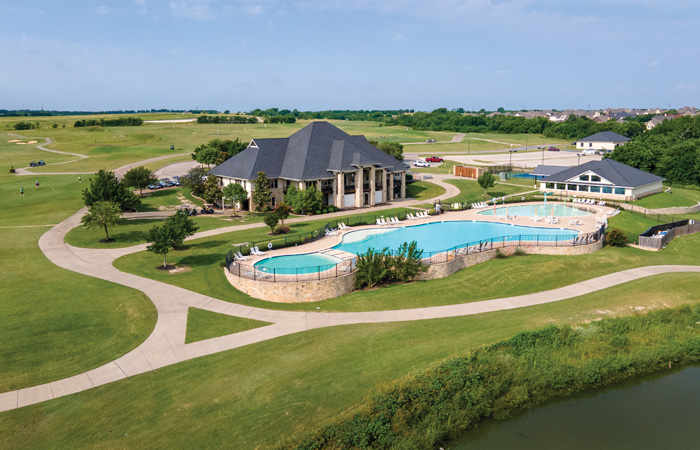 No. 3 is one of the more interesting holes on the course. It is a par 5 that measures 580 from the tips and plays significantly uphill. So, only the longest of the long can even think about hitting the green in two. For most, this will be a layup hole, but the third shot is the unique one. The green is about 40 yards deep from front to back, so players need to double- and triple-check their yardage before hitting their third. A player who comes up on the front edge with a back pin placement will stand over one of the longest putts one could ever face. And it’s significantly uphill, meaning it’s borderline impossible to judge the speed. It’s a unique green complex and something you won’t find anywhere else.

After the bunker-littered par-4 fourth, comes the second par five on the front at No. 5, and once you’re finished there, you will run into, arguably, the most fun hole on the property. Now, this very short par 4 does raise a slight pace of play issue, as most everyone thinks they can drive this green. It does play a little over 300 yards from the tips, but with most amateurs playing one or two tees in, the 280-or-so-yard shot means a lot of groups wait for the green to clear.

Once there is a green light, a driver right at the green is the play. But beware, there are several bunkers that can really be tough to navigate, one of which runs out to the right and collects shots with too much fade. Find this trap and it leaves the always dreaded (and rarely practiced) 50-yard bunker shot. And if that wasn’t enough, the whimsical green features two tiers and two very distinct mounds in the middle that can make putting a real challenge. Players who get something up short of the green, or even on the green, will still have to stay focused to make their three or even four.

No. 8 is another great uphill par 3 that features a couple of deep bunkers that guard the front right of the green. Club selection is at a premium here, as it will likely take a least one extra to get your ball to the top of the hill. Anything short will be a tough up-and-down. 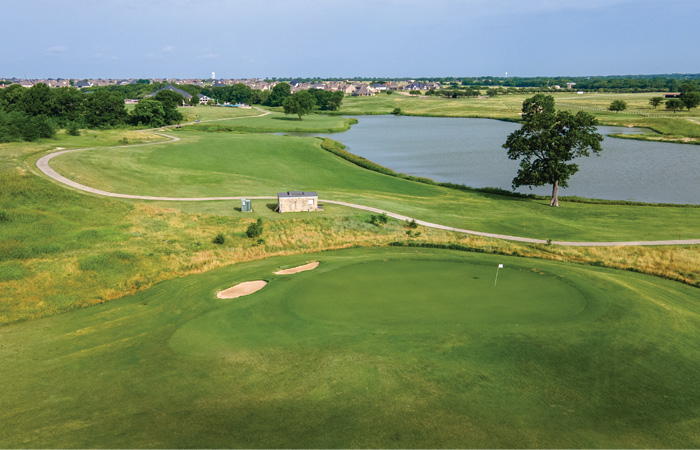 The final hole before the turn is a sharp dogleg left off the tee with several homes down the left. Pull one here and it will be in someone else’s massive backyard, and you will be re-teeing. Trees right mean the fairway runs out a little quicker than it may appear, so I chose to hit three-metal off this tee to control the spin, which left me a 7-iron remaining. If you play a draw, then driver is the play all the way.

The tee shot at No. 10 is pretty straightforward, but the green is anything but. The green has a large, deep swale right through the middle of it, meaning if you are on the front portion of the green with a back pin, you will need to put through it, which makes speed control difficult. However, if the pin is located down in the dip in the green, putting or chipping the ball right to its edge will nestle shots right down near the flag.

No. 12 is one of the few holes on the course that features a large carry over water. Shorter players can probably hit a wood, but the majority will go with a long iron or hybrid to lay back and take the water out of play. The approach is basically all carry, so be sure to take enough stick. 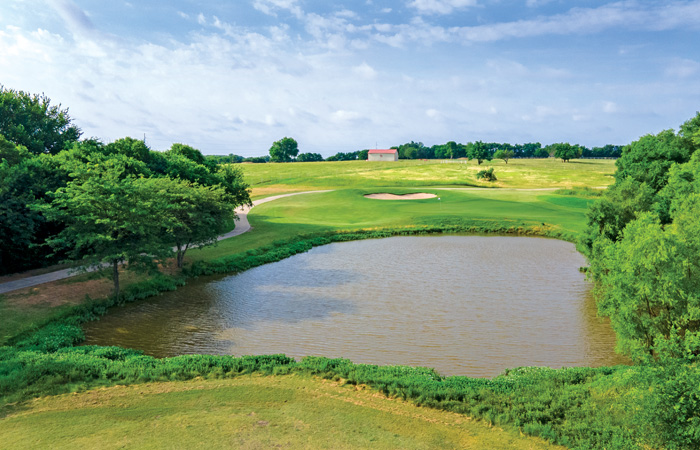 No. 13 is a visually pretty golf hole. To be honest, it reminded me a lot of a few holes at the Irish course at Whistling Straits in Wisconsin, and that’s about as high a praise as I can offer for a golf hole. It is one of the holes that houses have yet to impede upon, and the tee shot is a carry through a chute of trees and over a wispy meadow to a slightly elevated fairway. A trio of fairway bunkers stagger up the right side, so be sure to play your tee shot a little farther left than it may look to keep away from the sand. A smaller green awaits, but it shouldn’t be more than a short iron with a good tee shot.

The par-5 14th is another visually great golf hole. A split fairway bisected by a large hairy mound in the center gives players a couple of options. But hit your tee shot too far left and a little too far, and the fairway runs out into water. A safer play is down the right, which will leave longer players a shot at getting home in two, but a layup is also a solid play as this green is one of the funkier ones I have ever seen. The green features three very distinct humps that make reading it almost impossible, depending on where you are putting from. Let’s just say hitting the proper portion of the green here is a good idea. 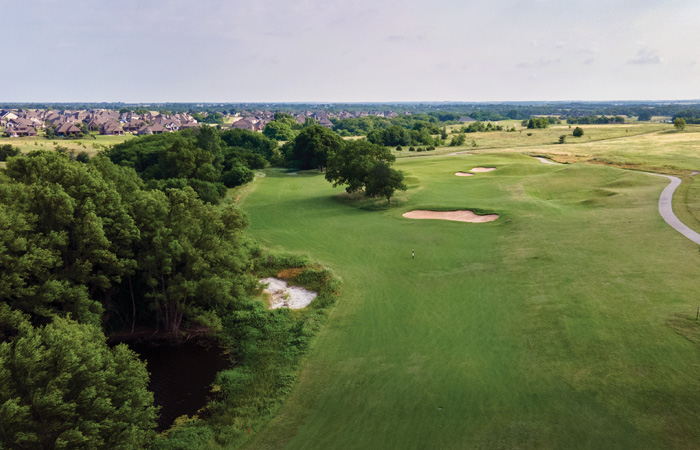 The final two holes at The Bridges provide an opportunity for glory and another opportunity for agony. No. 17 is a downhill par 3 that plays about 200 yards from the tips, with a tabletop green that has significant runoff on each side. The green slopes from back to front, so be sure to choose your club based on where the pin is located that day. If you are over the green with a back pin placement, best of luck stopping your chip shot within 20 feet of the hole. Pick the right wrench, though, and the hole is gettable.

No. 18 is one of the most often discussed holes here in the AVIDGOLFER office. This par 5 is best described, as, well … unique. Playing at almost 650 yards from the back tees, this behemoth features water everywhere, and two very distinct (and sometimes frustrating) trees.

The tee shot plays over water, and around one of the aforementioned trees to an initial landing area. This leaves somewhere around 350 yards remaining to the green, but players can’t just rip a 3-wood up there as far as they can, as there is another fairway steppingstone to navigate. However, on the second peninsula portion of the fairway awaits a massive tree that cuts the landing area in half. Players must not only avoid the tree and whatever detrimental bounce it might conjure up, but they also need to play it far enough to get by the tree to leave a manageable third shot. It’s a wild second effort, but someone has to do it. Should you be up to the task of getting around or over the tree, a third of somewhere in the 130-150 range remains, with more water to carry. It’s rare you are forced to carry water thrice on the same hole, and it’s even rarer to carry water thrice on the same hole that also features a tree in the middle of the fairway. Look, it’s not the world’s best design, but it’s dang sure memorable and will separate the men from the boys.

The clubhouse is large, with a community pool available for Bridges residents out back. There were several people sunbathing and enjoying the crystal clear, cool water while we were making our way up No. 18. There is also a tennis court and gym, available to residents, as well. While you’re there, you can also pop in the Masters Grill and enjoy some cold beverages pre- or post-round. They have everything you might want to consume on the course, both of the adult and non-adult variety. The pro shop has a nice selection of gear without being pretentious, and the staff was friendly and accommodating during our visit.

Overall, The Bridges is a really scenic county-style layout. Fairways and greens were good despite being in the middle of what is now becoming a very concerning drought, and the overall design elements and routing are perfect for the terrain. It’s got plenty of character and some fun, scorable holes.

If you are interested in a peaceful round away from the city noise, and some great chances at birdie, then The Bridges is a rock-solid option.