There are few images that, once seen, are hard to evade your memory. When I played Indian Creek this past month, the images from our July 2015 issue kept popping into my head. Indian Creek was, unfortunately, one of the courses that was put underwater during the historic storms in May and June of 2015. We documented some of the damage in our July issue; we shared photos of the superintendent’s boat parked next to the floodwaters that submerged the majority of the starter’s gazebo and the rippling waves covering most of the entrance front gates. I was told that, after the storms subsided and it was time to uncover the damage, employees would park closer to the entrance located off Frankford Road and the superintendent would pick them up via boat. Large carp and other fish swam rampant throughout the fairways while the staff surveyed the course.

It’s hard to believe that a course can come back from such extensive damage, but I’m thrilled the City of Carrollton, and new operator Orion Management Solutions, chose to devote the time and energy needed to restore Indian Creek. While the water-related upgrades were left to the Army Corps of Engineers, the City added new bunkers on both courses, repaired cart paths, a restored pavilion area and a new irrigation system. One year after the Creek Course reopened, it’s back and in beautiful shape.

One thing I really enjoyed about the Creek Course is the moderate level of difficulty. It’s not overly sneaky or diabolical, but occasionally you’ll be faced with tough obstacles and layouts that will challenge you mentally. It’s nice because it will suit players of all ability levels that want to have fun, but will also punish any poorly executed shots or club selection.

True to its name, water is present throughout a good portion of the Creek Course. The interesting part is that while some holes feature the water as a direct hurdle (we’ll discuss No. 18 in a bit), on some holes the water serves more of an influential role in guiding how you play through. It comes across as more of the natural landscape instead of a constructed hazard.

For example, No. 16 is a 601-yard par 5 that plays as a sweeping dogleg to the right with a string of bunkers along the left. The hole is less angular and more C-shaped, and has a creek running parallel in the curvature of the hole. From the tee, the water encourages you to play left. Sure, it will scoop up any wildly wayward shot or slice, but I would just let the sleeping dog lie. Aim for the left side of the fairway and keep going. 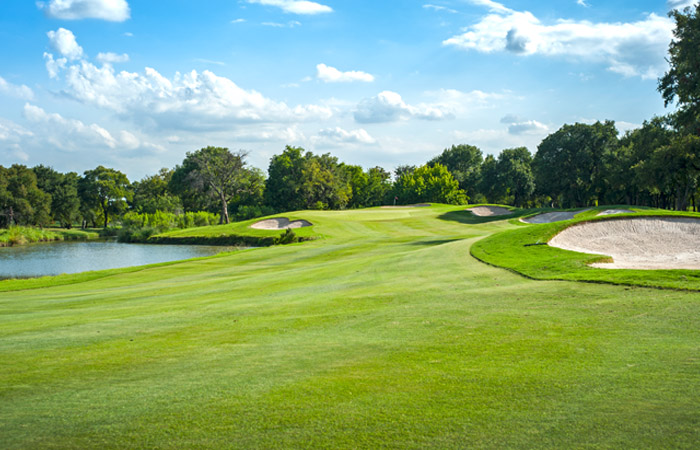 No. 18 is a different beast entirely. I have a bone to pick with this one as I almost made it an entire round with the same ball. Then I got to 18. It’s a unique layout in that not one, but two bodies of water can impede your tee shot. The lakes and grass create a checkerboard-like scene where one lake takes up the left side of the tee shot landing area, leaving open fairway on the right. But that fairway is only about 100 yards long before another lake appears with open grass to the left. The green is situated on the right side, demanding a water carry.

Here’s the dilemma: you can try to carry the left lake, which is probably around 300 yards from the Blue tees (not the tips), or you can choose to lay up. However, a layup can still leave an approach of 160-200 yards, not to mention the water and the greenside bunker. There’s no bump-and-run on this approach; you either carry the lake or you’re toast. If you run out of steam or misjudge the distance and end up short, you’re in trouble.

The bunkers, which are ubiquitous as they’re sprinkled on every hole, received a face-lift on both courses. They are sharply edged, feature glittering white sand and make any time spent in the trap as pleasant as can be. In addition to being beautifully maintained, the bunkers can also vary in size from a slight inconvenience to a sandy behemoth. Some bunkers, such as the one guarding the green on No. 12, can measure out to be 20 yards or longer. It’s very possible that one could take more than one stroke in the bunker if you have to tackle it lengthwise. The greenside bunker on No. 11 even has a solitary island of grass built in the middle, which is a unique touch I haven’t seen at other courses.

The designers did a wonderful job in creating a course that celebrates the natural undulation of the land, and continued the rolling hills into the course layout. Some of the landscape contributes cosmetically but some has real consequence if your ball takes an unsavory bounce.

Like the fairways, many greens often feature two tiers or more, continuing the flow of the undulation. 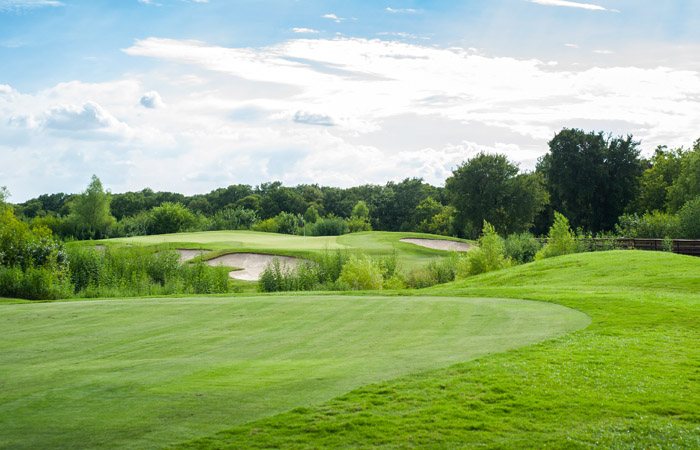 The conditions when we played at Indian Creek were absolutely phenomenal. I was shocked to see such a bright shade of emerald green everywhere I looked on a Texas golf course in the late summertime. You can tell the management and staff take pride in maintaining the courses, and it shines through brilliantly.

A few of Indian Creek’s amenities stood out during our round: the GPS monitor in the carts and the water jugs located every few holes. The GPS display, which showed a bird’s eye view map of each hole, was extremely helpful is seeing what was ahead. It also calculated the distance to each bunker and/or water hazard, leaving the guesswork out of it for first timers at Indian Creek.  The water jugs were also a nice touch because, although we’re technically entering the autumn months, it can still be sweltering.

At the one-year milestone after reopening, the Creek Course at Indian Creek has made a full recovery in my perspective. The grass is green, the bunkers are new and the carp are back where they should be- in the ponds. This resurgence is not only beneficial to us avid golfers, but I’m excited for the Carrollton community to once again have this pearl back open for play.