College coaches have sometimes been likened to gods. Not just football coaches who earn millions of dollars a year, but coaches of other sports too. If such coaches are responsible for Division I teams, such as teams in the Pac-12 conference, then they are literally superstars in their own right. One such coach is Chris Zambri who headed the University of Southern California’s golf team for 14 seasons, and helped the team win 3 Conference titles, many NCAA regional events, as well as many NCAA championship berths.

So, who is Chris Zambri and how did he contribute to his team’s 32 wins during his years as head golf coach? Zambri started playing golf at age nine, mostly at the Los Robles and Westlake golf courses in the Thousand Oaks region of Southern California. The golf bug bit him at around age 13, which is why he played high school golf at Westlake High and went on to be a member of the USC team that several years later he would re-join as head coach.

What does coaching a blue blood program involve? College golfers, according to Zambri, are not ‘finished products’ and there is a lot of work a coach can do to help a player at this level. Coaches are even called on to handle personal matters such as student-athlete expectations, success-failures, college life and more. What Zambri specifically brought to his team was being a good mental coach and a bit of a sports psychologist (even though he always made it a point to hire a good mental coach who would work with the team every couple of weeks). His other contribution to his many team members’ games over the years, was course strategy. Since 2015 this aspect of his contribution has strengthened even further with the use of Scott Fawcett’s Decade golf playing strategies. 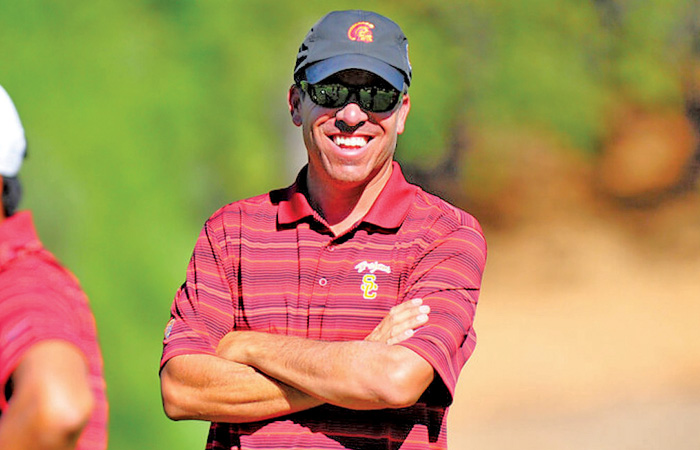 Perhaps Zambri’s biggest contribution to his team was that he meticulously collected data on all aspects of his players’ games over the years so that they could get factual information about the current state of their games, especially the practice aspect. He always felt it to be too vague when he’d ask a student, “How was your weekend, did you practice?” and the student would say, “I did, and it was great”. Now he has found a way for golfers to define ‘great’ – by the numbers. After reading the book Moneyball, Zambri thought collecting data was something he should do too, and so he started collecting all possible data of his team members’ practice sessions. Then, when presented with a very talented but raw team in 2009 that needed to get better quickly, Zambri formalized all the information he had collected to form his 7 ‘combines’ – golf’s very own version of the football combines! These tests were based on which aspects of his extensive data-collection correlated most directly with on-course performance.

As the USC team frequently used the University’s football field for practice, it was easy to see where shots would land left or right of the yard lines, and often Zambri himself would stand where balls were landing, to pace off the distances left or right of target. And these data were then transformed (based on some years of trial and error) into three-line tests – 90-140 yds, 140-190 yds, and 190-235 yds. The line tests indicate how far left or right of target shots carry. For instance, a golfer is asked, “which club carries 190 yds?”. If the reply is 6 iron, then the 140-190 yd tests the 6, 7, 8 and 9 irons, hit 5 times each, while alternating between clubs. Each line test has a known level that a player should achieve, so that when a student says ‘great’, it can be accurately defined!

Then next three tests in the combine are the random tests – 50-90 yds, 90-135 yds and 135-185 yds. They assess both distance and directional control. Finally, there is the simulated putting test. This involves golfers making 18 putts from different distances to the hole. Those distances are specific and are based on data collected for one team over an entire season. They range from very short to quite long, and the total score for a good simulated round of putting should be about 29, which would reflect a ‘strokes gained’ score (a performance metric that compares a golfer’s performance to his/her peers) of zero for the combine. Beyond that, Zambri has golfers record the number of inches short or past the hole their putts end, for the 10 putts of the simulated round that are 10 feet or more away from the hole. Additionally, a calculation called the ‘speed ratio’ is made by dividing the distance to hole by the number of inches the ball ends up short or long. Between any golfer’s top 25% and bottom 25% performances (as assessed by strokes gained), there is a significantly better speed ratio for the best, compared to the worst, performances. What that means is that while sometimes golfers can make their first putts poorly, they are likely to have the best performance when all long putts are rolled close to the hole.

Now Zambri has tied up with his friend Scott Fawcett to provide all the combines as a part of the Decade app (they call the combines the Zambricade part of the app!). This app is being used by professional golfers, weekend warriors and college golfers alike. Zambri helps college coaches make the most of his combines by offering them free one-on-one information sessions. The combines basically help golfers of all skill levels to quantify their practice sessions rather than merely hitting a few shots with a few random clubs. Not only do the combines help golfers to create meaning out of practice, but they also help them to answer some of the biggest golf questions – Should I change what I have or leave it alone? Am I at a high enough level to meet my competitive goals? Zambri’s years of data collection have resulted in useful tests that every serious golfer can use to make their practice, and thus play, more meaningful.