Imagine the whimsy and sheer poetry of a golf course associated with the “butterfly effect.” We live in a part of the world where golf course names invariably and predictably (according to The Business of Golf by J.J. Keegan) involve a color (356 courses use the word “green”), a land feature (1,019 use “hill”), an animal (165 have an “eagle” in the description), a tree (440 use “oak”) or a direction (“west” has been used 186 times).

Now imagine if that captivating name is associated with the work of two “partners-in-crime,” who are bold, innovative and decisive in their golf course design ideas. Then the term “butterfly effect” could refer to four loops of six holes each, making a golf course look aerially like the wings of a butterfly. Or it could be associated with the chaos theory concept of the flapping of tiny insect wings in one part of the world, leading to a typhoon from disturbed air currents, far, far, away.

Well, golf course architect Agustin Pizá and former PGA TOUR player and current Golf Channel analyst Brandel Chamblee literally planned their very first joint venture into course design – a 24-hole facility in Cuatro Ciénegas, Mexico – to be the modest start of something that will take wings and fly away into the future realms of meaningfully changed golf course designs and, ultimately, the exponential growth of the game of golf itself. 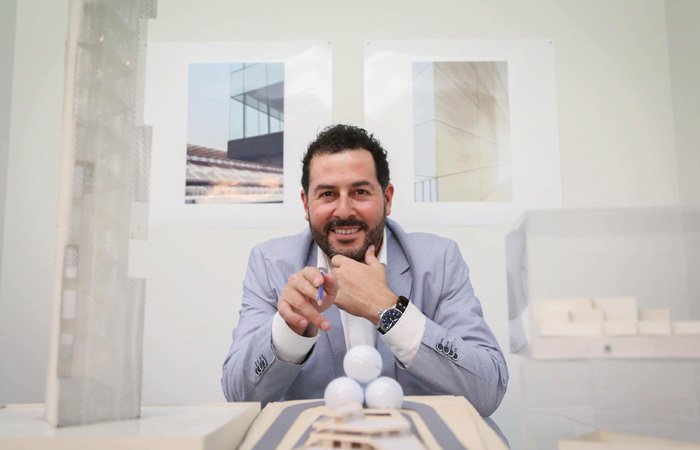 Who, then, is Pizá, and how did he decide upon Chamblee as not merely good company for the occasional fat cigar and perfect-bodied wine that they both enjoy, but also as a partner for some of his future design ventures? Pizá is an architect, with a master’s degree in golf course architecture from the University of Edinburgh. His design background has been influenced by the projects he has undertaken for Jack Nicklaus, Tom Fazio and some world-class resorts.

Chamblee was a natural choice, says Pizá, “because of his character on television. I admired him since I saw him as a golfer/fan and as part of the industry. I love that boldness. And, while people throw things out there on social media to get followers, Brandel backs it up, he does the research and likes and loves to study everything.”

Pizá added, “When we started talking, I knew he would challenge me to become a better architect. Through our careers, we had opportunities to do something and we did it. We are not shy to create things behind the camera or the pencil. Great synergy, beautiful timing, building each other up, good balance. His knowledge behind everything that has to do with analytics and statistics. We bring the left and right sides of the brain together.”

Not quite done with his justification for Chamblee, Pizá went on to say that, “Brandel brings to our partnership an acute understanding of golf course playability. As a former PGA TOUR Professional, he appreciates a golf course from a player’s standpoint, but as an analyst, his intellect provides some profound and unique insights.” 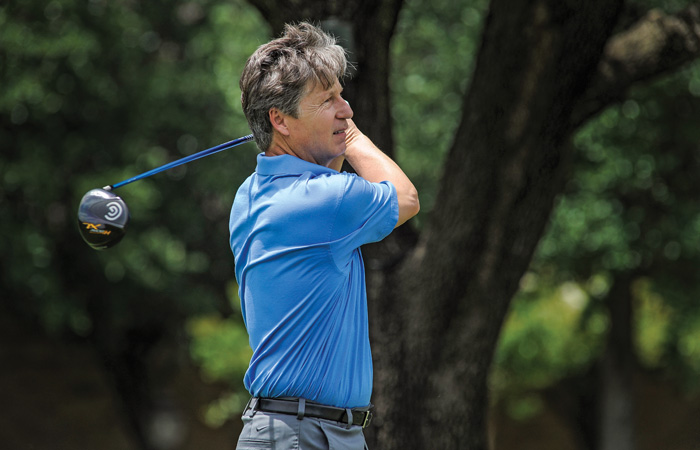 For his part, Chamblee says, “I teamed with Augie as we’re not afraid to be different. We do not necessarily go with the norm. We want to carve out an area for golfers and non-golfers to play golf, including for non-traditional golfers looking for a non-traditional game played out on land. Augie is best to bring that experience to life.” In fact, the duo boast that they wish to demonstrate “what creativity can do to not only drive renewed interest with existing golfers, but also bring new golfers to the game via exciting, visually stunning and playable courses.”

So, of course, it was important to call them on this broad, over-reaching statement. How do they offer “quality, aesthetic and strategic” golf courses? While quality is a given, the aesthetic aspect is, to Pizá, about basic beauty. “You fall in love first with your eyes – our signature is nature, and we learn from it and let it prevail,” he said. He also likes to play with proportion, rhythm, melody and the theatre of the mind. Given the poetry in just his speech, it is not a far stretch to imagine his golf courses are spectacular, as well as a visual feast. To this team, strategy is about the science, while aesthetics is about the art.

Chamblee adds, “It is more easily felt than articulated. We play golf for entertainment and enjoyment but, really, we play it to be inspired and motivated to get better. To think better strategically. To have the best cognitive experience and routing strategy, as well as an aesthetic experience.”

The Pizá-Chamblee concept of multi-purpose golf is designed to counter the effect of the game becoming too time-consuming and ecologically unsustainable. Their big priority is conserving resources, not just of water and land, but also of time. Pizá already has projects under his belt that have been termed Wellness Golf and Lounge Golf. In general, they involve using a restricted space and providing a few tees with fewer greens, multiple pin positions and some unique hazards. Here a family could bring along friends and kids, kick off their shoes to sense the luxurious grass underfoot, relax and unwind, and play a fun match by day, or switch on the lights, the music and sometimes even the firepit, and party away the night. A regular round of golf at such a facility would require no more than 90 minutes to complete. 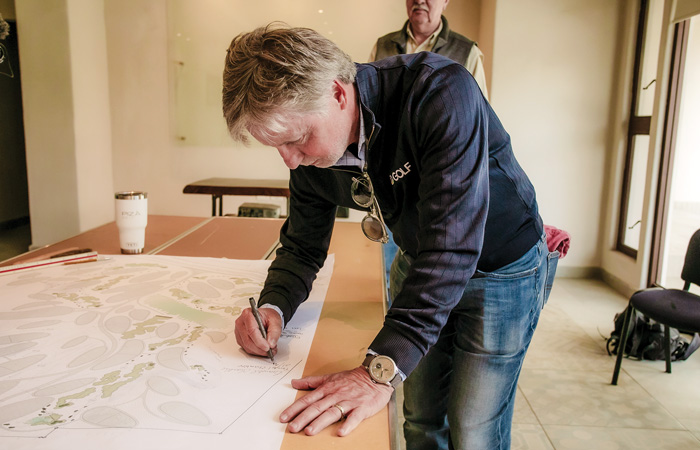 Other than small-space designs, what else does this team offer? On a regular-size golf course, what is the basic strategy of their hole design? Is it penal, strategic, heroic or something else? They work with clients to see what their vision for their golfer/customers is. Because, between them, they fully understand the science, the art and the business angles of golf, once the purpose of the golf course, be it resort, public or private is known, they determine the “book” they will write. Poetic Pizá phrases it thusly, “We think of an 18-hole course as a good book with 18 chapters – we want you to be part of a great book or art movie.”

They allow a golfer to peak, come down, get a rest and continue on, just as in a good novel. There is something different each time – a good routing. It could be a thriller or a romantic comedy depending on the experience the golfer is expected to have.

Once their client’s desires are known, they get to work, using an 80-point exam which ultimately determines the type of experience a golfer might look forward to. Eventually, the result requires golfers to use all golf clubs, all shot trajectories, and play some holes that are penal and some that are strategic or heroic, while winding around and through a variety of bunker types. “We want golfers to experience a carousel of emotions,” Pizá says.

One more gauntlet remained to be thrown down. Who do they deem to be non-traditional golfers and how do they plan to make golf an exciting experience for those with different requirements of the game? Non-traditional could refer to the fastest growing segment—women and kids, who are usually addressed as an after-thought. The aging-out golfer. The young, cap-backwards, untucked shirt, newbie.

Of course, this interview came about mainly because the Butterfly Effect and future projects have been widely touted as being designed to have women in mind, too – something that Chamblee has been passionate about for years. So, when asked, “What, in your opinion is the biggest challenge women face?” he had a ready response: the amount of power they produce. Also, the trajectory and spin they generate.

At all levels of the men’s and women’s Tours, women are typically 40 yards shorter in distance, and 20 miles-per-hour slower in club speed. On one hole at Augusta National, Chamblee explained, a left-side bunker has been placed to test the best male players in the world, who might, if trapped there, blast out with a 7-iron. Women driving into that bunker would struggle to get out because they required a 5- or 4-iron to reach the green, but the depth of the bunker prevents an easy exit with a less-lofted club.

When Chamblee plays with his wife, who is a very fine golfer, there is a par-5 at their home course that she has never reached in regulation. Why? She is forced to use a wood for her third shot, and it involves a carry over water. Thus, she can never have the opportunity for heroics, while a good male golfer such as Chamblee might need a sand-wedge to make regulation. Yes! It takes a man who often plays with his wife, and sometimes his mother-in-law, and has the required empathy, to truly understand the issues that hamper this oft-ignored demographic.

Pizá adds, “What’s been going on is that designers just address the situation for the driver, so golfers of different handicaps can arrive at same place, more or less.” That being the result of tee boxes choices. “[There is] no catering for the second shot. That’s where the error is,” he added.

Pizá-Chamblee designs plan to incorporate not merely appropriate tee-to-green yardages (they believe there should be a 1,000–1,200-yard difference in course lengths for men and women), but also the suitable placement of hazards in fairways, manageable bunker depth and angle, and even appropriate green-firmness. This design duo has absolutely nailed it on the head, and all skill levels of juniors and women, not to mention seniors and beginners, are sure to enjoy not feeling completely useless on one of their golf courses.

While the current project is in Mexico, in a beautiful part of the country known for its natural springs and wetlands within the desert, several future projects are planned for South Texas. Something, surely, for present and future golfers to look forward to.