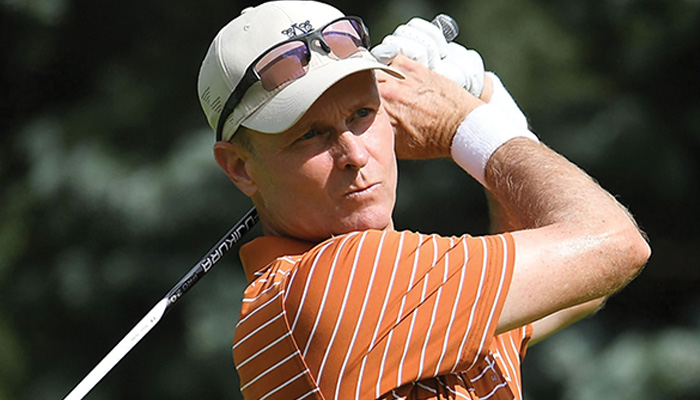 Can an average golfer really learn anything from a Tour Pro? Well, maybe not by trying to swing like one, but there is certainly a lot to learn from how a pro acquired his or her swing, and whether the information acquired was any good, which will be reflected through either the player’s performance capabilities, or in his/her injuries. Bob Estes, a four-time PGA Tour winner, is a Texan born and raised, and thus knowing more about one of “Texas’ own” and his rise to the highest level of golf, is an interesting exercise. Here are his responses to a bunch of questions about his swing and his golf game, and there is much for the rest of us to learn from his golf swing.

Does he have specific concepts about the golf swing that he works on? “I don’t think I really have a ‘swing philosophy’”, he replied. “I have worked with different teachers going back to when I was 14.” Each of those teachers had their own ideas about the grip, setup, takeaway, and other aspects of the swing, so he took from each of those teachers what worked for him, while still getting everything to “match up”. Estes does not currently work with a swing coach so he’s obviously trying to piece together what works best for him, much like it appears Tiger Woods is presently doing.

One change he made in 2016 was to strengthen his grip. He played most of his PGA TOUR career with a grip that he feels, in retrospect, may have been too weak (with both his hands turned too far to the left) and a backswing that was too flat. In turn, he believes that that was a combination that forced him to come “over the top”, with a too-steep angle of approach to the ball, resulting in fades and slices. Once he strengthened his grip and learned to keep the club more in front of his body going back, he found he was able to approach the ball more from the inside, which helped him to straighten out his ball flight or even move the ball from right to left when necessary.

So how did that piece of self-instruction go? “I’m not sure I’ll ever ‘have it’ but I am striking the ball better than I ever have because of those changes. I think I can still improve upon what I’m doing by getting my hands a little higher at the top and being more patient in transition.” It is very unusual to hear of a golf professional fixing his own swing in these days of “constant-companion” golf instructors. However, it must be said that Estes is not completely coach-free. He does rely on the world’s currently most popular golf instructor – YouTube! He finds that forum contains a lot of good instruction and advice from many leading golf instructors on all aspects of the game.

The flip side of performance is injury. In scientific terms, joints that are positioned awkwardly (in the anatomical sense) at the top need awkward manipulations so they can be jockeyed into the appropriate angles for impact. Estes has had a “tennis elbow” injury (probably on the left side, because right handed golfers mostly get “tennis elbow” on the left side), his left wrist, and his left shoulder. What could cause all the main left-side upper limb joints to be injured? The shoulder impingement could have been from dropping the shoulder downwards as the arm rises upwards during the backswing. The tennis elbow could be from an excessively straight left arm with a tight grip close to impact. The left wrist? Usually from too much “dropping down” (ulnar deviation) of the wrist, also in the impact region. Overall the three injuries could probably be reduced with less up-and-down movement of the torso. And that same reduction of movement would prevent the arms from coming down over the top as much, improving performance too!

Of course, there are other ways to manage the twin issues of performance and injury. Estes has cobbled together a swing that works for him, from a collection of ideas he has learned over time and uses modern treatment methodologies such as prolotherapy as well as an expert fitness-rehabilitation team to manage minor stiffness and soreness. In other words, there are many ways to bell the cat that is the golf swing, and, as technology and golf swing research improve, the day is not far away when golf professionals with the high work ethic of a Bob Estes have access to the best possible solutions for their specific swing and fitness requirements.