The Dallas-Fort Worth area is full of wonderful golf courses – both public and private. They are known for the challenges they offer to golfers, for their esthetic appeal, and for the uniqueness of their designs. One however, has always been known for its history as much as for its visual appeal. Not just some history, but history with a capital ‘H’. And that course is Shady Oaks Country Club in Fort Worth.

It is a naturally beautiful property built on the hills of Westover and dotted with century-old live oak trees. It came into the limelight as being iconic golfer Ben Hogan’s home away from home for many years, the place where he could practice in private near what is now the par-3 course known as the “Little Nine”. Hogan even used his ‘special area’, by a little tree in a corner to warm up for any events he played at the Colonial, a mere 15 minutes away. According to Jody Vasquez, who wrote the insightful book “Afternoons with Mr. Hogan”, Hogan refrained from using the actual driving range of the main course, where the general membership practiced from, but instead hit his own balls in solitude and hired club caddies to shag them. 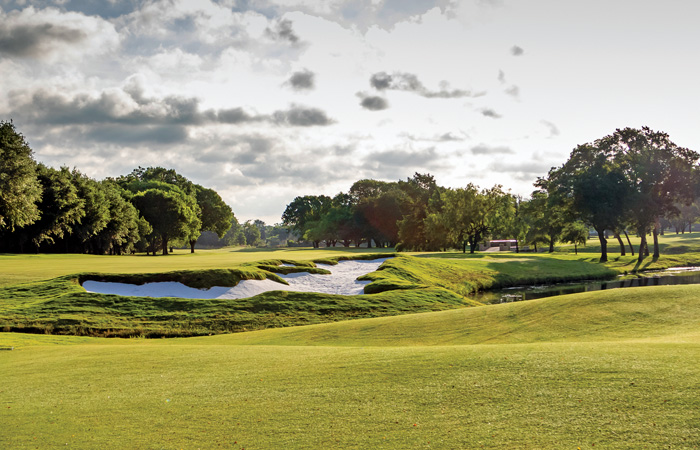 Shady Oaks was truly home, for almost 40 years, to the great golfer who was often seen relaxing at a table that was reserved just for him at the men’s grill. He even had a golf cart that was earmarked for his use. His was the great story of a blacksmith’s son who became a caddie and, through their common love of golf, also became best friends with Marvin Leonard, a well-known Fort Worth businessman and builder and owner of both the Colonial and Shady Oaks.

Mindful of this history, and eager to find the right architects to revamp the golf courses, the membership chose a design firm owned by Geoff Ogilvy, Michael Cocking and Ashley Mead (OCM) to start on the Little Nine and test the best grasses, bunker styles and construction techniques, before progressing to the main course. The choice was not made lightly. Ogilvy is a professional golfer, known for having one of the best minds of any player on the PGA TOUR. Cocking and Mead are golf course architects and one of them will physically spend 150 days on a site for a 300 day build time. Their company prides itself on the hands-on approach, which allowed for Shady Oaks club and course staff to become involved in the project, so by the end, everyone felt invested in, and ownership of, the final product. Moreover, according to Cocking, lead designer of the project, what their company offered was a layout that would challenge a golfer and make him/her think through options while also being kind to less skilled golfers. OCM believes in letting a site dictate how the course should look and play, and also uses distinctive bunker styling, green design, contouring, and indigenous plants and grasses to add to the uniqueness and natural look of a course.

Another interesting plan suggested by OCM was to use the 10 acres of the Little Nine to build not just a better-quality short course. As a result, the holes can be played from any location to any green, and, moreover, the space is now an ultimate practice area allowing for the play of every conceivable shot from inside of about 350 yards. It is indeed rare for golfers to have such a unique area to practice in, given the crowded conditions of today’s typical driving ranges and short game facilities. 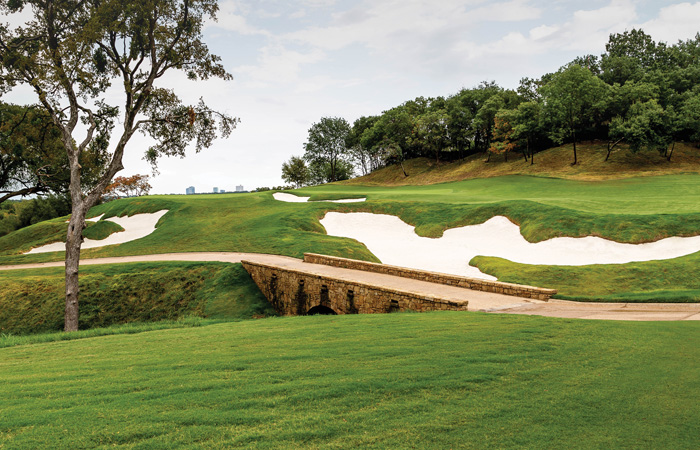 The property came with some established traditions, set by the owner, Mr. Leonard, and his designer, the famous course architect, Robert Trent Jones. Cocking has heard the story that Leonard often complained about the Bermuda grass greens of Texas, as he believed the bent grass greens of Northern USA were far superior. He was told by those subjected to his frequent refrain, “If these greens aren’t any good why don’t you go and build your own course”. And so, he did, and both Colonial and Shady Oaks, to this day, retain their bent grass greens despite any challenges from hot Texas summers. Shady Oaks was a special project for Leonard, as he went ahead with its construction despite being told by Hogan that the land was too steep and too rugged for a golf course. Perhaps that was why the original course was, in Cocking’s words, “essentially a parkland…wall to wall grass and fairly heavily treed”.

On the main 18-hole course, the original contours of the land had changed over time. Tees had been artificially built up too high, there were some mounds which had been added that didn’t look natural, and in general the greens and bunkers did not tie into the long natural slopes of the site. The new overall plan was to expose some of the natural features inherent to the area in general and the property itself; to create a better sense of ‘place’. So, at each hole, the first thing that was done was to try to return the land to the way it would originally have been, without, at first, worrying too much about the new features to be built in.

“Shady,” says Cocking, “Is a terrific and diverse site with the course winding through some steep rocky ground on the front nine, playing over or alongside some ravines or steep drop offs and then playing down to and across the river on a number of holes on the back nine.” Over the years, trees and made-up ground had largely hidden some wonderful natural assets, including the river, some interesting rocky outcroppings, a dry riverbed ‘barranca’ and even scenic vistas of downtown Fort Worth.

Once overgrown shrubs and some 20–30-year-old trees were removed, the river was brought into play as part of the strategic plan for holes 14 and 15, and the barranca was restored and a new stone bridge placed across it. Many holes thus became more picturesque and dramatic. The original corridors and the routing of the holes were retained, but new bunker schemes and green complexes were used to form risk-reward situations. 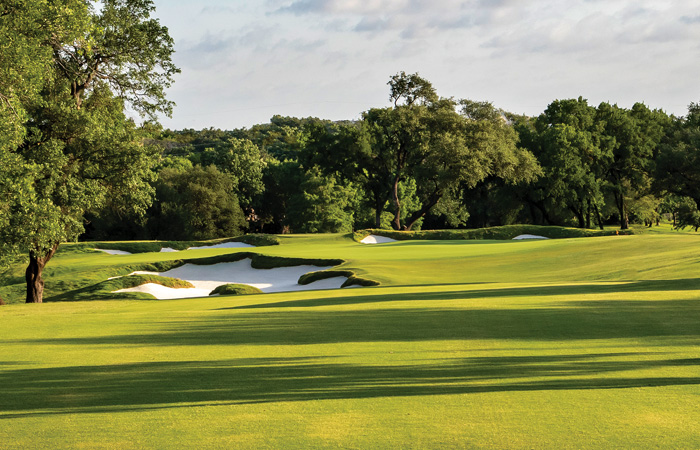 The fairways are now more generous is their width, and there is clearly a right (and wrong) side of fairway to play on, which changes as the pin moves from one side of a green to the other. The combination of wider fairways with shorter grass not only makes the golf course more playable for less skilled players, but also keeps the holes more challenging for elite golfers. The holes are designed to favor play from one specific part of the fairway or the other, and often hazards are positioned strategically to indicate just that. To gain a reward, the golfer must take on the risk of some element of trouble. The new bunker style, in many ways a throwback to the 1920s and 1930s, reflects the modern trend of shaping hazards in an artistic manner, compared to the plain round or oval bunkers seen at the old Shady.

Today’s Shady Oaks Country Club is not only a redesign that exposes the natural features and vistas of that part of Fort Worth, but every little detail, including the furniture on the course and even the flags on the holes have been thoughtfully recreated to create a masterpiece that both Leonard and Hogan would have been proud to call home.