Who doesn’t like being a hero when in the trees? It’s always fun when you pull off a massive hook, slice, or punch. Let’s talk about what you need to do to pull off more of those fun shots.

What is a hook? A hook shot is a ball that starts right, and curves left for right-handed golfers and opposite for left-handed players. 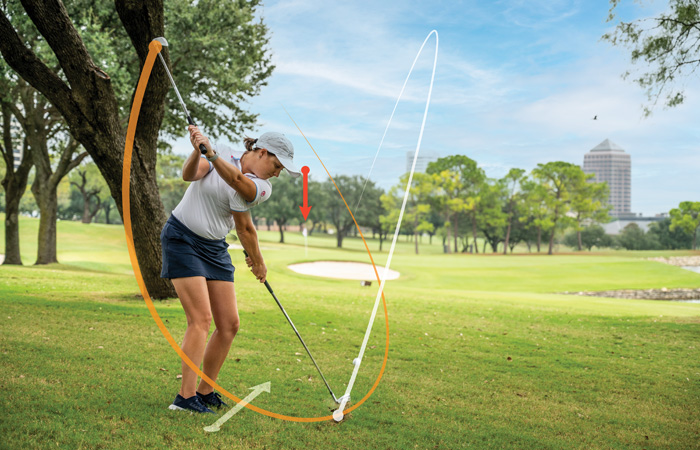 Once, I am properly set up I focus on my downswing and swing down my feet line of an inside-out swing path or as if I am on the pitcher’s mound in baseball and swinging towards first base making sure to keep my clubface closed as I do this. The more you swing out (towards first base) with your clubface closed the more right to left spin you will create. Another thought I tell students who have a hard time hitting a hook is on their downswing think about leaving your chest facing away from your target as you swing in an inside out swing path.

What is a fade? A fade or sometimes called a cut is when the ball moves left to right for right-handed players. This is the same shot shape as a slice but is more controlled and doesn’t cover as much later distance as the slice.

Now, how do you hit a fade or slice? First, look at your grip and setup as it is crucial in hitting a fade. To hit a fade, it is important your grip is weaker than normal (top hand, left for right-handed players is rotated slightly counterclockwise). When you look down you should see two knuckles instead of three at address. Another way you can grip the club is to hold the club more in the palm of your top hand, rather than your fingers. Your bottom hand should be rotated slightly in the same direction as your top hand. If you rotate your bottom hand too far on to the top of the club it is ensured the clubface will stay open. Don’t be afraid to play around with your grip on the range and see the differences in your ball flight, but when playing around with your grip remember subtle changes are always best. 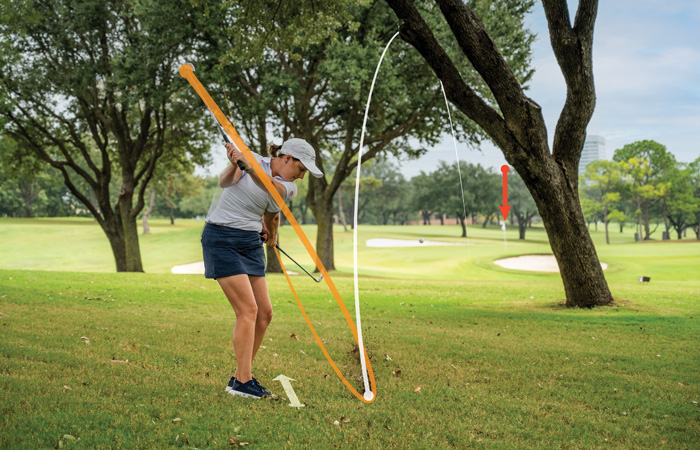 Once you have the proper grip and setup as shown below, it is time to focus on your downswing and swing path. For the draw you focused on swinging in to out or towards first base, for the fade you will focus on swinging out to in or towards third base. It is important to hit the fade your club is working in a slightly outside in motion (the clubhead is hitting the ball and then moving left after impact for right-handed golfers, it will be the opposite for left handed players. The more the club works out to in as shown in the picture with an open face, the more fade spin you will create. Another way to think about hitting a fade is to think about your finish, you want the clubhead to be low and left when you finish as shown below.

What is a punch shot? A punch shot is a low shot to keep you under trees and get you back in play.

How do you hit a punch shot? Let me first get one of the biggest mistakes amateurs make when hitting this shot out of the way. Amateurs tend to make too long of a swing, which tends to send the ball higher in the air. Everything in this shot should be abbreviated, the backswing and the follow through as shown below. A good way to think about this shot is as a long chip shot, rather than a full swing.

Here are a couple keys to think about when hitting this shot. Your stance should be narrower than normal at setup, ball position should be back in your stance (towards right foot for right-handed players) and weight should be eighty percent on your lead leg and stay there the entire swing. 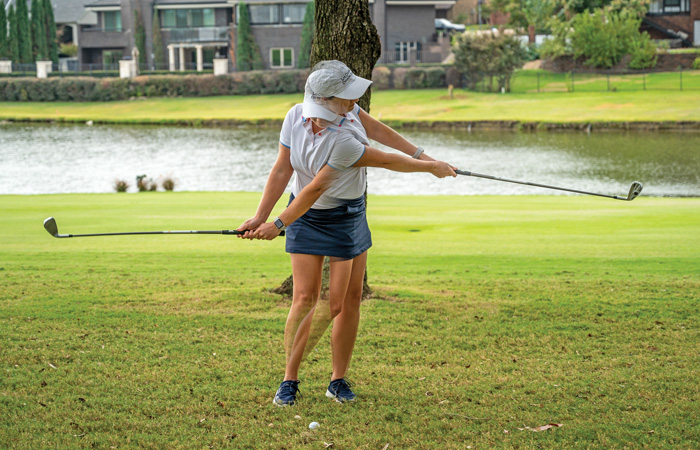 Once you are properly set up, make an abbreviated backswing and finish with the clubhead low to the ground after impact (abbreviated finish) as shown in the picture. This shot is all about abbreviation as well as rotation, if you stop rotating your torso through the shot it can cause a top or shank.

Kirsten Pike is the lead Teaching Professional at Las Colinas Country Club. To improve your scores follow her on Instagram at kirstenpike_golfinstruction and visit kpikegolf.wixsite.com