Originally featured in the May 2014 issue of AVIDGOLFER Magazine

One of the newest faces on CBS 11 and TXA 21, Jane Slater is a sports anchor with a sports addiction. She’s done it all – covered Super Bowls, World Series games, the NBA playoffs and even the Pavilion at the HP Byron Nelson Championship.
It hasn’t always been easy for Slater – she lost her job as a local sports radio host before joining CBS – but she’s never given up on her goal of covering sports in her hometown.

With the Byron Nelson upon us, Slater took the time to dish on life as a television and radio anchor, the best parts about covering sports in DFW, the places to stay downtown during the tournament, and why she only frequents one or two of Dallas’ hundreds of fine restaurants. 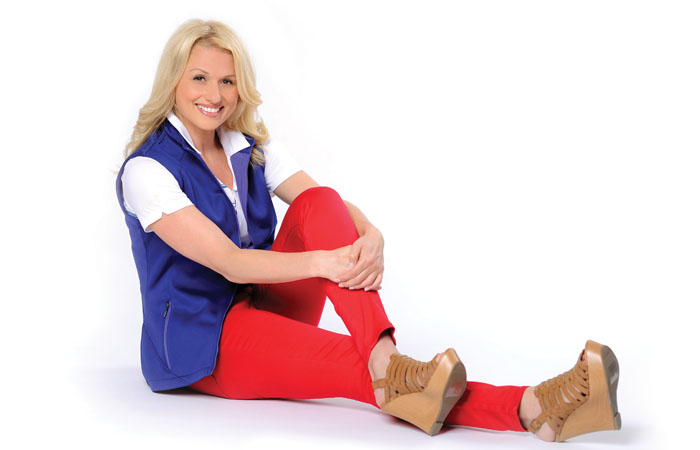 JS: I moved to the Metroplex four years ago after working in Denver. It was an exciting opportunity for me to come back to Texas because I grew up in Rowlett and had always wanted to come back home. As a kid I had watched the famous anchors on CBS, so when I moved back to town and got to the opportunity to work for the news desk, which I did for about two years, I was thrilled.

I could only take working on the news desk for so long. I have all the respect in the world for what those journalists do, but it was just too many natural disasters, too many times knocking on mothers’ doors, asking about their sons or daughters. After awhile it left me with a heavy heart. But you don’t get that with sports – sports is uplifting.

There always seems to be a hero in a sports story, and always a chance for redemption. You might lose a game in a series, but you can always come back and win the next one. I love the fact that there are always great stories that come out of sports.

I started working on the radio with Mark Elfenbein, and it was probably the greatest experience of my life. We had one heck of a year together – I learned so much and grew so much. It took me out of my element – I had so much experience working on the television side, so to be immersed in the radio world for a full year was the ultimate learning experience.

After a year on our show, the radio station decided to go in a different direction and canceled our show. They were looking for higher ratings in our time slot, and that was a tough pill for me. But I understand it, it’s a business decision for the station and another learning experience for me. At that time Gina Miller was leaving CBS and they called me up for an interview and, lo and behold, the next thing I know I’m on CBS 11 and TXA 21, and I couldn’t feel more lucky.

People who live in the Dallas/Fort Worth area want to believe that we are the ultimate sports town, but I’ve lived in places like Denver, and that’s an ultimate sports city, too. Dallas is a great sports town – we love a winner. We want to believe that the Cowboys are going to turn it around and that the Rangers will stop breaking our hearts – we have great fans here, but there are great fans everywhere.

Sports is such a unifier. I can talk with my grandmother, who knows nothing about sports, about the Mavericks or the Cowboys because she tunes in to TXA 21 every day. That’s what I love about sports, and what is so great about this town – there are so many storylines that are universal and anyone can relate to. Sports is like the ultimate ice breaker – it’s a conversation piece between any two people.

As a journalist, covering sports allows me to have a personality as part of who I am professionally. Not that you can’t as a news reporter, but on the news side, there is such a serious tone already woven into the fabric of every story. Sports allows me to naturally portray my excitement, frustration or nerves that I just couldn’t get at behind the news desk.

I’m such a Dallas girl. I spent my weekends as a child at Northpark; I think we ate at Campisi’s every Sunday with my whole family when I was a kid. So when I go over to Fort Worth, it’s foreign to me. I love the feel of it, the pace – it’s probably what people from other states think all of Texas is like, but it’s still a bit unfamiliar to me. I’m just all Dallas at heart – it’s where I feel at home.

The Byron Nelson tournament is a great event for Dallas. I love golf, but what drives me crazy about some of the people that go to the tournament is that they don’t ever make it past the Pavilion. We have such a great tournament right here in our backyard – go out and actually see the tournament! I bet if you went out and surveyed all those people in the Pavilion, more than half of them would say they never see any more than the final hole during the tournament. They couldn’t even tell you who is leading on Sunday.

If you are going to stay in Dallas, you have to stay at The W Hotel. That puts you right in the middle of everything downtown, right where most of the excitement is. If you’d like to be in a bit quieter, more secluded and comfortable area, check out the Rosewood Mansion at Turtle Creek.

I’m obsessed with Tex-Mex – I think that’s all you should eat while you are here. For me that starts and ends with MesoMaya, which is right down the street from the Perot Museum. If not there, my vote is for Victor Tango’s (on North Henderson Avenue) – you cannot beat their food and drinks. Those two places, that’s really all that I eat!

After dinner, my favorite place to go out is Concrete Cowboy. People may roll their eyes at that, but it’s a great place to go and I always have a great time.

From The Vault Jane Slater