When describing a golf course, there is a razor-thin line between “tough but fair” and “too difficult.” When a course ventures into the realm of “too difficult,” the fun factor can begin to wane. When it first opened in 2010, Old American Golf Club flirted with that “too difficult” line. The track has always been one of the most beautiful and well kept in the state, but may have been a tad too difficult for the masses. Lucky for us, that has all changed, in the subtlest of ways.

I was only two months into the job as editor of AVIDGOLFER Magazine when I was tasked with writing my first review on Old American, and my first time on the golf course was a bit of a mixed bag. I enjoyed the layout and ambiance – the views of the lake are incredible, and the course was in immaculate condition, even in December – but I walked off the 18th green frustrated with the course’s difficulty.

It wasn’t the length (there are ample tee markers that provide any length) or the greens – they are on the small side and sloped, but not overly quick so as to be unplayable – that bothered me, but the amount of times that I thought I hit a great shot, only to find myself in a bunker or run through a fairway into a waste area or thick patch of grass. It felt like Old American only rewarded the perfect shot, which makes it tough for all of us non-professionals.

Fast-forward to now, and what you’ll find at Old American is a slightly kinder, more consistently playable golf course, even though you probably won’t notice a single difference. 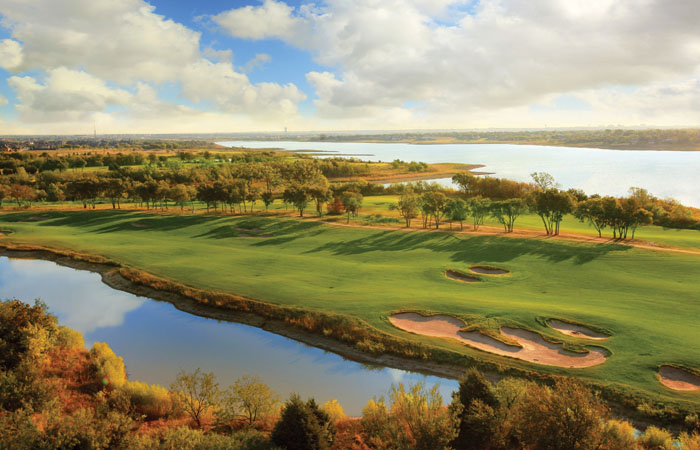 In 2015, Old American was hit especially hard by the flooding across DFW and spillover from Lake Lewisville. The course was completely under water for months at a time, and it wasn’t always clear that it would reopen again when (or if) the waters did recede.

When the waters did finally recede, general manager Mike McCabe and his staff were faced with an interesting opportunity – simply clean up the course and leave it alone, or take the chance and make some changes while work was being done anyway? McCabe chose the latter, and the course has benefited greatly from that decision.

The post-flood changes occurred mainly in one main area – addressing the mass amount of bunkers on the golf course.

“When we looked at it from a big picture standpoint, we had about 200,000 square feet of bunkers on this golf course, and we cut that down to about 100,000,” McCabe said. “Almost every hole on the course either underwent bunker elimination or shrinkage.”

Unless you know the course intimately, you probably won’t notice the reduction in bunkers because the grounds crew did such a masterful job of filling the areas with either fairway or rough, providing seamless topographical transitions. You will, however, be pleased when your golf ball finds fairway or light rough when in the past it found a small, deep bunker or waste area. McCabe also took the opportunity to replace and upgrade the liners in all the bunkers and shave down some of the lips, giving the sand a much more compact, playable surface and reduce player frustration.

The subtle changes across the course make a huge difference when it comes to overall playability (and fun factor), but Old American still is as true to its roots as ever. The course – designed by Justin Leonard and Tripp Davis – is a tribute to tracks built in the early 1900s, the “Golden Age” of golf course architecture, when designers such as A.W. Tillinghast, Donald Ross and Perry Maxwell built courses like Shinnecock Hills, The Broadmoor, Bethpage Black and Pinehurst. The layout ebbed and flowed with the contours of the local land, and shot making is still at a premium on every hole.

In designing the course, Leonard said, “For as long as I have been able to play the game of golf over some of the best golf courses in the world, I have been in love with the early American golf courses. I have been fortunate to play tournament golf over courses such as Shinnecock Hills, Pebble Beach, Winged Foot and Pinehurst, which has given me a very in-depth perspective of the strategic elements that make these courses great and a sense of how the strategic side of golf architecture was approached with these early American golf courses.”

From the back tees (known as the “Leonard” tees), Old American measures a salty 7,174 yards, but five other tees are available for any level of golfer. The fairways are wide, running hard and fast, which is beneficial on some of the longer holes, or when the prevailing wind off the lake blows in your face. Take pause on each tee, however, because Davis and Leonard have placed many of the course’s 120 bunkers in the middle of fairways or hidden by swales and dips, forcing players to be accurate off every tee. 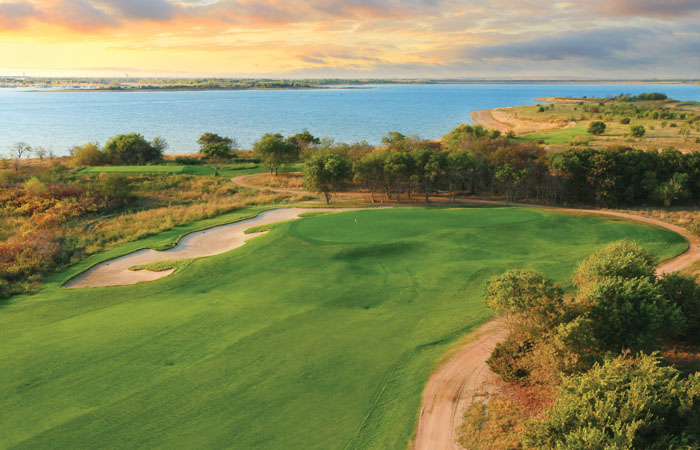 While not a traditional links design (technically a course can only be dubbed “links” if the soil is sand-based), Old American has the feel of a links course. Many of the holes are lined with natural high-grass areas that take on a beautiful golden-brown color in the winter. There are few trees on the course, leaving most of the holes open and exposed to the winds that swirl off the lake.

There was nothing dainty about courses built during the Golden Age, and there is nothing dainty about Old American. The fairways run hard and fast all year, and the greens are undulated and challenging. You won’t see any fine-trimmed rough or bunker edges either; the grass grows naturally off the fairway and around the bunkers, giving them a rugged, rustic appearance and the golfer an experience he or she would find at Bandon Dunes or Whistling Straits.

Maybe the most impressive thing about Old American is the views of Lake Lewisville from many of the holes. The third hole offers one of the most picturesque views overlooking the lake, and this par-5 is one of the best birdie opportunities on the course. Then, as you make the turn onto the back nine, you’ll play a stretch of holes that run along the banks of lake, providing pristine views of the water and bordering shoreline, creating a calm, peaceful vibe.

After you finish the round, make it a point to stop in and have a meal at the revamped clubhouse. Redone in 2012, the restaurant/bar area is small and intimate – done that way by design, to create an at-home feel – and features hardwood floors refurbished and revitalized from an old high school basketball court. On the back side of the clubhouse is a 2,000 square-foot patio where you can sit and enjoy a meal or drink, and gather around the large fire pit if the weather gets chilly. Chef Nick Baker is one of the best in the business, and patrons from the nearby neighborhoods flock to the club all nights of the week to enjoy his newest dishes and libations.

The Old American experience is a great one, now even more so than ever. While the recent changes sure make the course a bit more enjoyable, it still plays tough, and provides an excellent challenge for those seeking it, and its unmatched style provides one of the unique golf environments in the area. 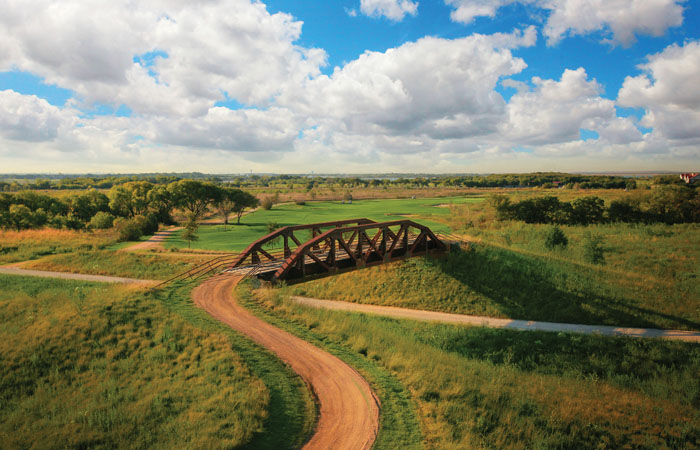 Toughest hole: No. 15 – At over 480 yards from the back tees, this would be difficult if it was a par 5, let alone as a par 4 that it is. Water lines the entire left side, and a jagged bunker sits out in the middle of the fairway collecting tee shots. Going left of the bunker gives you a shorter shot into the green, but the right side of the fairway is the safer play. Either way, you are still left with at least a mid-iron (probably a long iron) into a green with high grass and a large bunker on the left. Bail out to the right if you have to, but if the pin is in the front, it’s an impossible up and down. If you can make out with a five on this hole, take it and move on.

Our Favorite Hole: No. 14 – At 588 yards from the back tee (and usually into the wind), this isn’t a reachable par 5, but it is certainly a beauty. The 14th curves first to the right and then back a bit toward the left, before ending in a tricky green complex out on the water. The entire hole is bordered by the lake on the left, and while it’s really not in play, the views are wonderful. If you hit the fairway, you are left with multiple options for a second shot, from a fairway wood to a mid-iron depending on the desired length of your third shot. The 14th hole is a true par 5 in the traditional sense, and one that we can appreciate.

Most intriguing hole: No. 16 – The 16th provides much-needed relief after the difficult 15th. It’s only 335 yards to the front edge of the green from the back tees, which is doable with the hard fairways. There is a series of bunkers in the middle of the wide fairway, but there is ample room to the left for a lay up off the tee, and the bunkers are easily flyable if you are going for it. The green is wide and relatively forgiving, and there is a collection area behind it that isn’t bad if you bounce over the green.