As the original golf resort in the Caribbean, opened by still relatively unknown Pete Dye in 1971, the Casa De Campo resort and its signature Teeth of the Dog layout has always set the standard for golf in the scenic Caribbean.

But with its recent international showcase, hosting the Latin American Amateur Championship in February, overseen by the United States Golf Association, the R&A and Augusta National Golf Course, plus its continued upgrades and improvements, Casa de Campo continues to prove the upgraded original is as good as it ever was.

The par 72 Teeth of the Dog layout, which Dye opened at age 45, still challenges the best of golfers from 7,357 yards on the back tees, like amateur Paul Chaplet from Costa Rica, who won this year’s Latin American Amateur and earned a Masters Tournament invite.

But the course, which features seven oceanside holes with four on the front nine and three on the back, can also be played for fun and scenic enjoyment by the thousands of vacationers who come to stay in the many villas and rental homes here.

Add to the golf menu the equally scenic 27-hole Dye Fore Course perched on the cliffs overlooking the Chavon River, which Pete did with his talented architect son PB, and the recently renovated Links course, which winds its way through the massive complex, and you have a very full weekend or even longer if you want to check out this embarrassment of golfing riches on this Caribbean golf island. 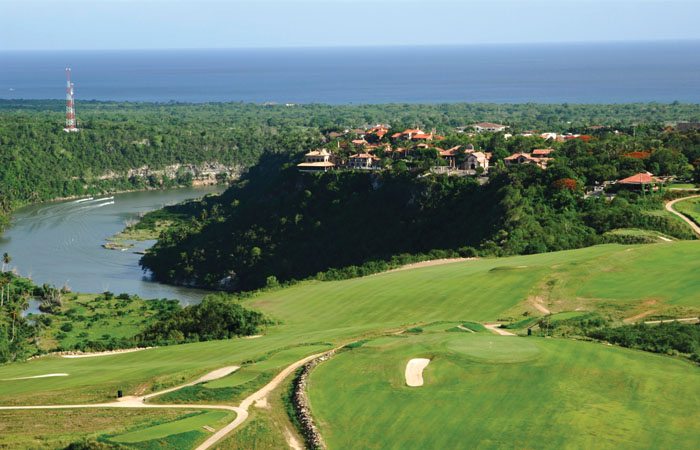 “We want to want make it fun and special for everyone here,” said Robert Birtel, Casa de Campo’s Director of Golf. “Pete has always made it a challenge, but we want to make it special for those who have come for the first time or many times to challenge the Teeth.”

Forecaddies assist every group with reading the greens, tending the course and sharing stories among the crashing of the waves on the shore side rocks.

Over the years, care has been taken to prevent erosion from the ever-pounding Caribbean sea and there is an active dredging operation along the coastline, all to make sure the ocean holes remain as scenic as ever.
The seaside holes have also been slightly shifted by the Dyes to make sure the water is always in play along with the large trees which line the course. Dye still has a home on the course overlooking the water, near hole No. 5,  and visits the course with his son and wife a couple of times a year just to make sure his master seaside work stays in top shape.

After a few calm holes to get your game in order, the Teeth of the Dog makes its first march to the sea with the par-4 fourth hole with the Caribbean Sea clearly visible behind the green. The par-5 fifth hole has the ocean all along the left side and trees along the right. The par-4 sixth hole turns away from the water, but it’s still visible along the left side.

The par-3 seventh, which stretches to 229 yards, also plays along with the water on the left side and breezes from the ocean. Like most Caribbean courses, the Teeth of the Dog, so named for the rocks along the shore which resemble a dog’s teeth, is at the mercy of the winds as players at the Latin American Amateur found out. Locals like to claim you can be bitten by the dog at any time. 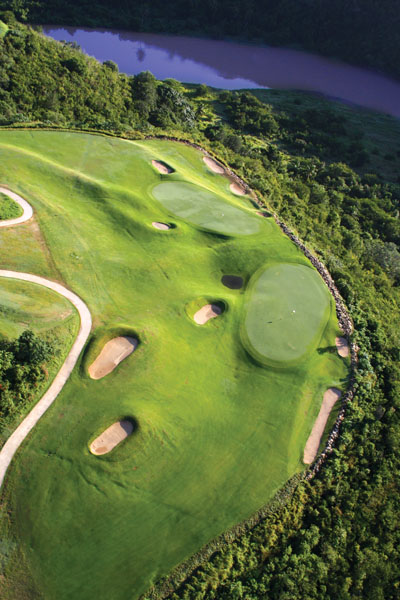 Some days the course can be absolutely terrifying with the swirling winds and other days can seem almost tame, but the Dye classic design is always challenging. With the par-4 ninth hole returning to the clubhouse, the course moves back to the ocean on holes 14-15 and 16 with most majestic views almost all the way down to the beach towards the town of La Roma. The par-4 18th returns to the clubhouse, but the views and the challenge means the destination course more than lives up to its reputation.

While the breakout success of Casa de Campo established Dye as one of golf’s hottest new architects, he and his family have continued to return to the area to build more courses. The next was Dye Fore: the 18-hole links layout which resembles a tight Scottish links style course without any ocean views, but plenty of well-crafted holes with challenging shot values and large trees lining the course.

In 2000, Dye and his son PB, still a regular and popular figure on the island, returned with a plan for a spectacular piece of land high on the mountain cliff which overlooks the Chavon River that empties into the sea.

“It’s some of the best piece of natural land I had ever seen for a golf course and I told him (Pete) he had to do it,” PB Dye said. “Nothing is ever going to replace the Teeth here, but this course is every bit its equal.”

The name comes from the first time the Dyes, father and son, saw the land. Partly as a joke and partly as a first impression, PB turned to his dad and said the course with its scenic views was certainly to “Dye for.” They had a good laugh among themselves, but the name stuck.

While you can feel the ocean spray on The Teeth, the visual scenery of Dye Fore is all down below you, but the views are no less awe-inspiring.

There are three nine whole layouts at Dye Fore: the Marina and the Lagos nines, currently under renovation, and the Chavon nine which has the most scenic views. Each of the layouts is par 36 and can stretch out longer than 8,000 yards from the back tees.

The Chavon nine plays along the cliff’s edge with signs warning wary golfers not to get too close to the drop off when looking for balls. 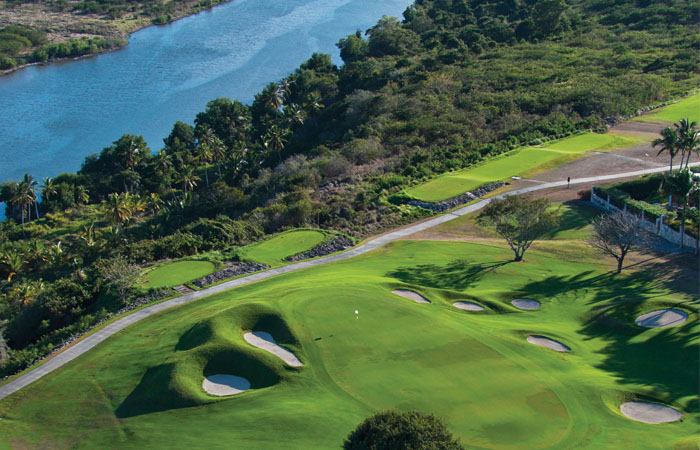 Among the most dramatic holes is the par-3 14th hole with the drop off all along the left side and the huge suspension bridge to the major town of La Roma visible from behind the tee box.

The closing hole, a 610-yard par 5, plays dramatically uphill as you approach the green with a well struck shot required to get the ball to stay on the large putting surface over the massive valley to the left.

Just above the hole is an outdoor bar to celebrate or commiserate your round at Dye Fore. There is also a very scenic balcony for weddings. Next to the large stone clubhouse is an authentic Dominican craft village complete with native shops, a huge fountain and bell tower monument along with a huge outdoor arena which has hosted some of the greats in the music business.

Less than two miles away is Casa de Campo resort headquarters which includes a beach club, an elaborate shooting range for both trap and skeet along with a tennis facility and two resort pools.

There are a couple of lively restaurants in the main resort facility along with a conference center, an elaborate workout facility and a newly renovated poolside spa with private, individual treatment rooms. Each of the resort room guests receives a private golf cart to explore the facility on his own and experience some hidden parts of paradise.

There are three major airports which offer direct connections from Miami from either Dallas or Houston: the nearby La Roma Airport and international ports Santa Domingo and Punta Cana, both about an hour away.

In short, what Dye brought to this area nearly five decades ago has been amplified and improved and modernized, but still retains its native charm.

Paradise perfected, renewed and restored. Pick your favorite island slogan and you have it at the enticing nature of the Casa de Campo Resort and the famed Teeth of the Dog Golf Course.