Most native Texans, if they paid attention in grade school, or read the book, or saw the movie, or stumbled onto the hallowed grounds after sipping margaritas on the River Walk, know the Alamo as the enduring symbol of Texas’ heroic fight for independence.

So, yeah, we like sorta remember the Alamo. But what about the small towns that made similarly significant impacts? Remember Gonzales, where the first shots of the Texas Revolution were fired? Or Goliad, where the Republic of Texas’ first Declaration of Independence was signed?

Wrapping my brain around these historical morsels, I saw the map in a different light while plotting a snowbird journey south for wilderness golf adventures. Port Aransas’ mild winters make it a natural recreation destination this time of year. But the small towns along the way can’t be ignored. They overflow with history and adventure, rivers and creeks, and a country vibe that seems to accompany the varying changes in terrain.

From the Hill Country southeast of Austin to 50 miles north of Corpus Christi, potential tall tales proliferate, just waiting to be written. You have almost limitless dibs on quaint nine-holers, fishing/hunting spots and campgrounds.

On Highways US-183 and US-77 South, golf courses are almost as plentiful as historical markers. So, I was pretty fired up as I loaded the trusty F-150 with the usual assortment of golf, fishing and camping gear. Having read about the historical landmarks, I wondered if we should bring the musket.

After all, we would be visiting some of the state’s most historically significant towns, where frontier justice ruled the unforgiving plains. To find wild golf in these areas, you could just follow the trail of famous live oaks – or Hanging Trees.

We set off on I-35 South determined to follow the legendary boot prints of frontiersmen who are now statues. We hoped to pay respect to the 342 souls executed by the Mexican army in the Goliad Massacre of 1836.

It was so late when we crossed the Guadalupe River into Gonzales that I considered finding a closer campsite. But we pressed on another 85 miles toward Goliad State Park & Historic Site. When we got close, I stopped to get firewood and a jug of water, and then captured food at the drive-through. Ah, soon The Beast and I would be sitting by the fire roasting marshmallows, boots kicked up under the big moon.

But that dream scenario transformed into nightmare two minutes later at the park entrance: Locked gate. No park ranger to listen to my oft-used late-arrival plea. I checked for an opening, but the entrance, featuring a stone wall resembling the old Goliad garrison, was sealed. No buzzer. No phone numbers. I’ve never seen such tight security at a state park. Here we were, 183 years after the Goliad Massacre, and you would have thought Santa Anna was returning.

Well, at least my horse was still alive. But what to do? None of my worst-case scenarios included this, so I decided to keep going all the way to the beach, about 120 more miles. With a recent condition enhancing the burning in my eyes, I summoned my inner Davy Crockett and told Ye Old Lug to giddy-up.

Back on the dark lonely highway, the landscape changed considerably: Vast open tropical flatland with occasional palm trees. A light mist kept the wiper blades screeching. My cheeseburger was cold. Lettuce, jalapenos and spicy ketchup oozed onto my lap. My scratchy old glasses were foggy. We needed gas.

It was past midnight when we reached the oil refineries on the outskirts of Corpus. Heroically, The Beast got us to Mustang Island State Park. But again we were locked out. I needed sleep, so we surrendered to a hotel.

In the morning, we headed to Oso Beach Municipal Golf Course, a sprawling layout south of downtown. I waltzed into the clubhouse, introduced myself, and explained that I was doing a story for AvidGolfer and was hoping to get a cart to shoot photos. Awkward pause.

“Uh, did you have something set up?” the young assistant professional said.

“Set up? Like an appointment?” I said, laughing. “No. I’ve been driving around the state exploring wild golf adventures. Heck, I didn’t know where I was going to sleep last night until my head hit the pillow.”

A 20-minute drive across town delivered us to Lozano Golf Center, a muny on Old Brownsville Road with 18 holes and a nine-hole executive course. The main course resembled Oso Beach. And the assistant pro had a similar reaction to my cart inquiry. He couldn’t give me a cart but said he could give me the number of someone who might. “No need, thanks,” I said walking through the door which did not hit me in the butt on the way out.

Desperately needing an adventure infusion, we drove across the bridge to Port Aransas to check out at least one of the beach courses before going fishing on the lighted pier at Mustang Island.

I had always wanted to play Palmilla Beach Resort & Golf Club, a linksy layout on the windswept dunes about 15 minutes away. My only worry was that the resort might be too swanky for Tales from the Back Nine. 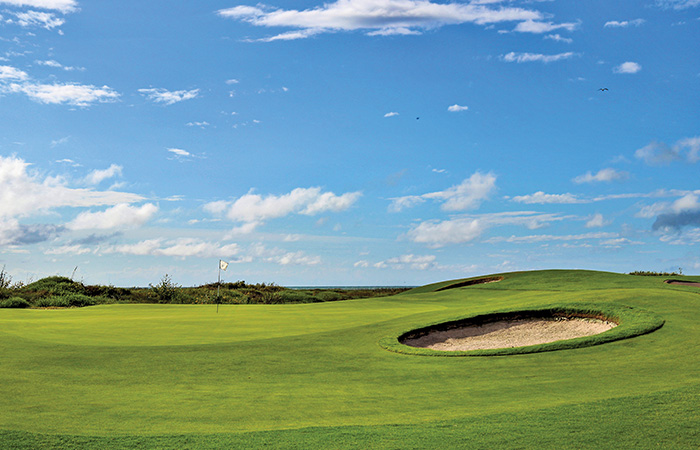 I walked into the clubhouse, introduced myself to the head pro and before I could say anything else, he came around the desk to shake hands and ask how he could assist me. He filled me in on course updates, explaining that the facility, originally 18 holes, just reopened as a nine-holer in June. “Which nine?” I asked. “The Back Nine,” he said.

Well, OK, things were looking up. Could I take some photos? “Sure, just take any one of those carts out front.”

After Hurricane Harvey all but destroyed the Palmillo Beach course, management set out to create a facility that could appeal to their home market – primarily families and tourists – as well as avid golfers.

The innovative approach resulted in a more accessible golf course that blends with the beach experience. New elements, such as “The Loop,” a walking-only three-hole short course, broaden the appeal to families. The main draw, regardless of skill level, remains the remarkably scenic links, which is worthy of national distinction.

Afterward, we didn’t go far to camp, setting up on Mustang Island. Fishing off the pier proved to be a comedy of errors in 40 mph winds, but hey, at least we were fishing. We departed early in the morning with sights set on four courses up north.

About 90 minutes later, we were back in Goliad. The charming town boasts the distinction of being the third municipality established in Texas. The civil settlement, known as La Bahia, had one of only two schools in Texas in 1804.

Goliad has two major live oaks – the old “Hanging Tree,” which delivered frontier justice to miscreants, stands on the north side of the county courthouse. The “Baptist Oak,” where 12 early settlers established the first Baptist church west of the Guadalupe in 1849, is also alive. 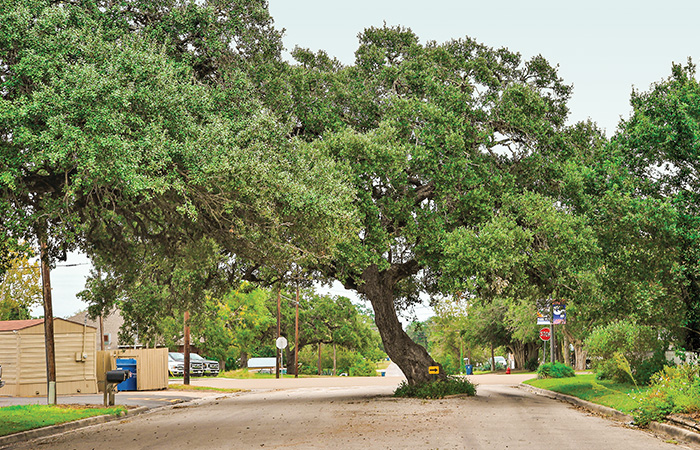 When we arrived at Goliad Golf Club, rain had halted play, so the friendly staff was tidying up for poker night. The nine-hole course, built on beautiful farmland, features rugged fairways tightened by, you guessed it, ginormous oaks. The old Zion Hill Baptist Church is across the street.

The par-36 layout, measuring 3,180 yards, presents a solid challenge with its creative design. The greens are small and dramatically mounded with steep runoffs of as much as five feet. Accuracy and scrambling are crucial here. With $15 green fees every day, Goliad is a bargain. The course, which opened in 1971, has worked diligently to improve conditions. Membership has almost doubled in the last four years.

Heading out of town on Fannin Street, we almost hit another famous tree in the middle of the road. I couldn’t help wondering what the sentence might be for toppling ole “Hanging Tree.” 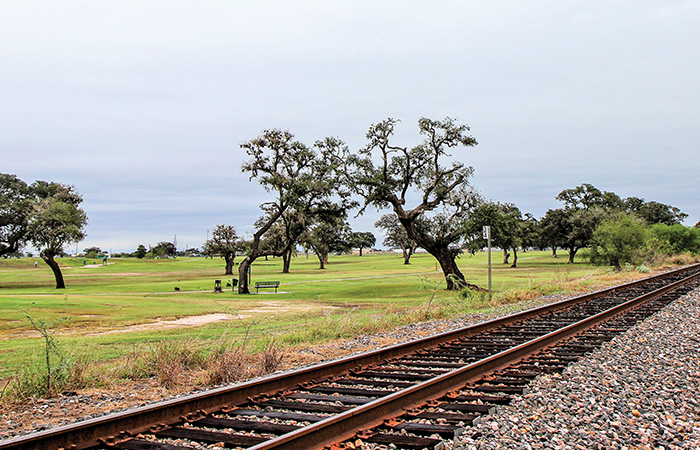 Thirty minutes later, we were at Cuero Municipal Golf Course, which opened in 1933. The place is typical of many small-town setups, nestled in an athletic complex. Train tracks border one side. The municipal airport’s one runway and a rodeo stadium border another side.

The greens are simple circles, which means the course probably started with sand greens. Five holes surround the City of Cuero Lake, which has a fishing pier. Oaks are everywhere, including some with dramatic twisting limbs. No doubt one of the most unique golf facilities I’ve seen.

Back on US-77, we drove 20 minutes to Yoakum City Municipal Golf Course. The old-school design and remarkable conditioning make this the region’s best. 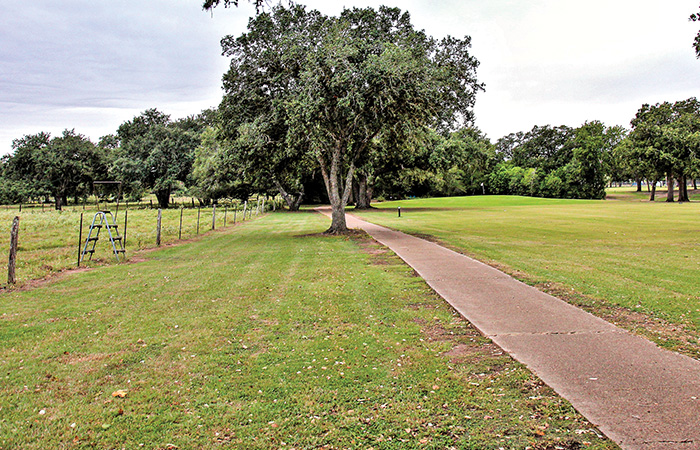 The layout, created in 1936, featured sand greens until 1956, when they were converted to elevated grass greens. The city’s golf tradition includes Yoakum High’s eight Class 3A state girls titles; their championship boards are displayed by the clubhouse. Yoakum is currently No. 21 in the Dallas Morning News’ ranking of the state’s top 25 nine-hole courses.

Not surprisingly, large oaks pinch the fairways. The property sits on a gentle slope, and so every hole either goes uphill or downhill. The par-36 measures only 2,960 yards and all five par-4s are less than 400 yards. The small greens have slight elevations and gentle runoffs. Water comes into play on three holes. A farm borders the south side, and a baseball field, rodeo stadium and RV park border the east. The municipal airport is across the street.

With the sun sinking low, we raced 17 miles on US-77 to Halletsville Golf Course. Like Cuero and Yoakum, Halletsville is nestled in the city park. The 2,985-yard course features plenty of challenges with virtually every fairway lined by, yep, massive oaks. 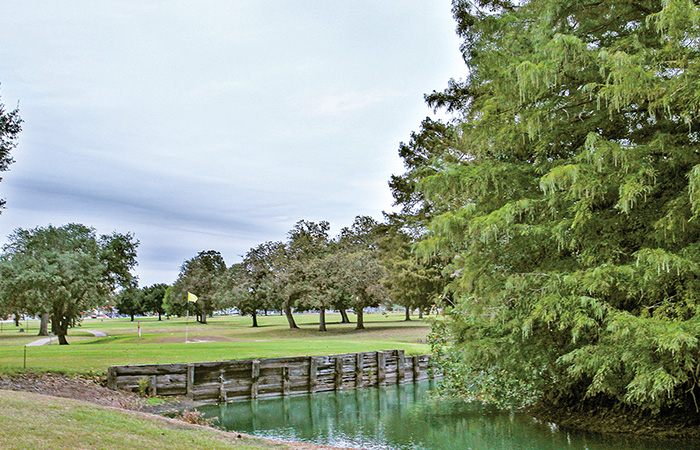 A large windmill adds to the country charm. So does the “Hanging Tree,” located next to the clubhouse. In 1878, when the Shooting Match Grounds sat on the current clubhouse spot, an Indian named “Pocket” was hanged for murder.

So, things could be worse. But with a 267-mile drive home, I hung a left out of the gate, where two large oaks stood sentry.