Walk into almost any modern home and in the living room is the centerpiece: a flat screen TV. Gone are the days of the CRT TVs or televisions with more wood paneling than actual screen. Now, you have LEDs, OLEDs and the brand new QLEDs to choose from; and believe me, a couple of letters make all the difference.

For years, LED has been the standard for flat screen TVs. However, most recently, OLED has dominated the industry by providing better contrast, wider color range, ultra-thin display and better durability than the rivaled LCD TVs. And with the launch of Samsung’s new QLED TVs, people are beginning to speculate whether or not it can rival or even surpass the quality of OLED.

Before OLED, LED TVs were the thinnest, most energy efficient televisions on the market providing the sharpest picture available. LEDs were a better solution than LCDs due to the technology for backlight, which turn off LEDs on portions of the screen where the picture is black. This would make dark scenes and black portions of the picture try to appear truly black. However, LED TVs do have flaws. LEDs face a problem called “blooming.” In this effect, LED light from bright portions of the image bleed to the black portions. The reason for this is the pixels themselves are not the elements producing the light. They have to rely on backlight to turn off on their behalf. This is where things get drastically different when it comes to OLED.

OLED, or Organic Light Emitting Diodes, do not require a backlight like LED TVs. Instead they create light through the application of electricity through thin films of organic molecules. This gives OLED the ability to only use colors and emit light when needed, making OLED the only tech that can create an absolute black. Manufacturers use the term “infinite contrast” to describe how the “absolute” black is achieved, instead of “relative” black where relative blackness is how dark a pixel can get when compared to the brightest pixel on the screen. This feature alone has been catching the eyes of those looking for the next home-run in their in-home entertainment experience. 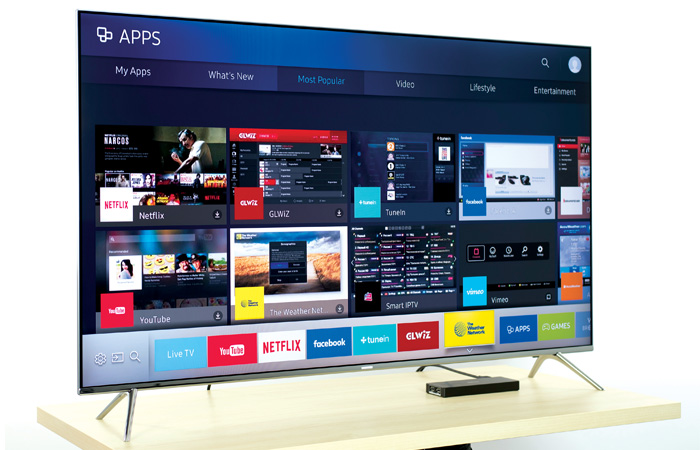 Apart from the image vibrancy, the responsive and smoothness of the display are far better compared to the LCDs and LEDs. So, gamers and home cinema enthusiasts will doubtlessly love the experience. OLEDs have a refresh rate 1000 times faster (as low as 0.001 ms) than a standard LED backlit LCD panels.

Since the light source is extremely small, screen depth is also reduced. So, this means you are getting super deep blacks, bright whites, greater color accuracy, smooth responsive motion and a very thin and light form factor. It can’t get better than that right?

Though OLED has proven to be effective on the market and popular among consumer demand, the new QLED TVs have been said to produce more vibrant images. QLED, or Quantum Dot Light Emitting Diode, was recently released by Samsung, who claims it to be, “The Next Innovation in TV.” Quantum Dot technology uses tiny particles between two and 10 nanometers in diameter. These tiny particles appear to give off more vibrant lights, brightness, and a wider diverse color range. A QLED TV’s brightness ranges from 1500-2000 nits, as opposed to an OLED’s 600 nits. Though the level of brightness is much higher than their competitor, QLED still manages to use only half of the power that OLED uses. Samsung also claims QLEDs to be more cost effective to produce. Although, their new technology has improved in contrast ratio, Samsung may not have reached the same level as the OLED.

Samsung seems to have produced a new level of brightness and vibrant colors as well as being energy efficient. They have done this while remaining more cost effective to mass produce and buy than OLED. Samsung’s new QLED tech seems to have the tools to launch itself into a huge success in the in-home entertainment market. It is seemingly more than capable to hold its own against competitors and possesses the potential to surpass even the most dominant in the industry. Do you find yourself asking “which technology is better?” It is all personal preference. You need to see them for yourself to decide.

Share: Tech Talk – How Many Letters Make a Great TV?