Now that we’ve entered into July, the full force of the North Texas summer is upon us. Humidity is on the rise, as are the temperatures, and there are very few places to venture to for an escape from the blazing sun. The upside to the seemingly endless Texas summer is the prospect of great golfing weather and long days (which means more holes to play). But, if the sweltering heat is getting you down, we recommend taking some time to play some golf where the cooling ocean breeze can help still the rising temperatures – the Caribbean.

There are at least 28 island nations in the Caribbean, and thousands of actual inhabited islands, and on many of those islands are some of the best and most scenic golf courses in the world. Legendary golf course architects have left their mark in the Caribbean, and every year thousands of golfers flock to the islands to enjoy the great golf, ocean breezes and beautiful views.

So, take our advice and take a trip a little south to some of these great golf courses and resorts. 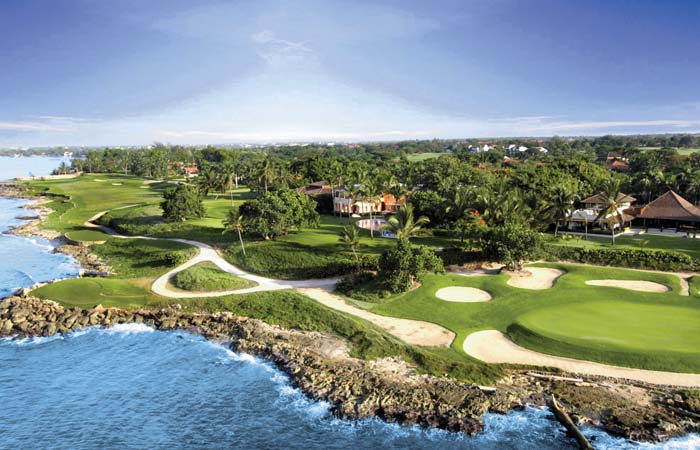 Designed by Pete Dye, and often referred to as his signature course, Teeth of the Dog at the Casa de Campo Resort in the Dominican Republic is constantly rated as the No. 1 golf course in the Caribbean, and one of the world’s Top 50 courses. TOD was carved right out of the rocky and coral-filled Dominican coastline, and serves as the Caribbean’s strongest test for even the most skilled golfers. Seven of the 18 holes run right along the ocean, and all provide beautiful views of the surrounding countryside and vast Caribbean sea. The golf course has some of the most scenic and beautiful par 3s in the world, and its architect once called it his favorite design.

The resort at Casa de Campo is one of the most beautiful of the Caribbean islands. Guests are offered one-of-a-kind accommodations, including fabulous villas and a four-star hotel. The resort offers an all-inclusive package for those wishing to have everything taken care of for them, and if golf is not your prime objective, there are plenty of other outdoor activities across the grounds. 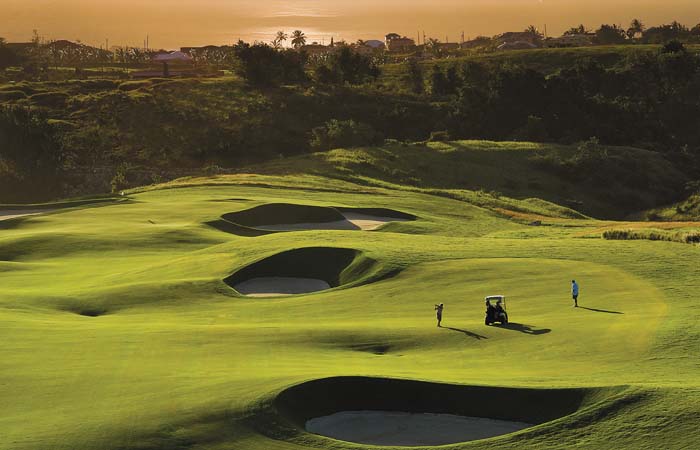 Opened in 2009 and designed by Chris Cole and Jeff Potts, Apes Hill was built on a unique piece of land, and the holes themselves are as varied and unique as the site with undulating putting surfaces and sharply edged bunkers. Each hole is unique, from the 12th hole with views of the east coast to the par-3 16th, whose setting within a coral-stone quarry has earned it the status of a signature hole. The layout is versatile, and should appeal to all levels of golfers, and the views of the Atlantic Ocean and the coral rock quarries that surround the course will certainly cause all players to pause and enjoy the views.

The golf course is part of the Country Club at Apes Hill Club that features locker rooms, a full gym, treatment room, and two swimming pools with a cascading waterfall from the top pool to the lower pool and a polo field. Apes Hill may not be the perfect place to take the full family on vacation, but few clubs can top its commitment to golf. 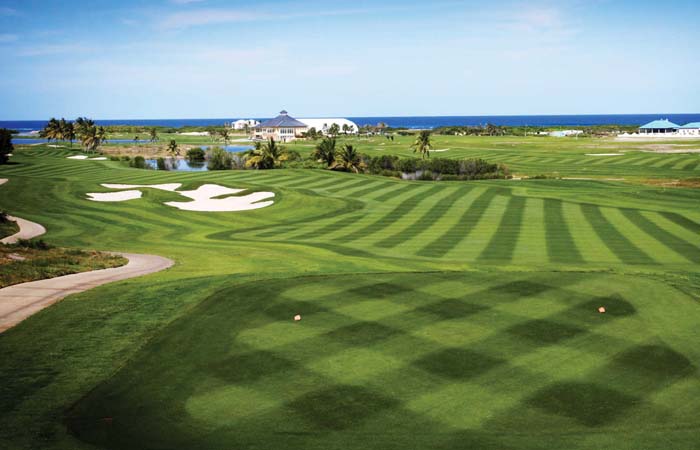 The St. Kitts Golf Club originally opened in 1976, but in 2002 it underwent a major renovation and face-lift by famed Canadian architect Thomas McBroom to become the stunning golf course it is today. The course features two full holes on the coast of the Caribbean Sea, and the holes along the black sandy beaches of the Atlantic Ocean. The beautiful par-3 15th hole is one of the most scenic in the entire Caribbean; from the back tees, which sit at the highest point on the golf course, players can see the neighboring islands of Saba, St. Maarten and Nevis, with the Atlantic Ocean as their backdrop.

Accompanying the golf course is the St. Kitts Marriott & The Royal Beach Casino, constantly rated as one of the Best Caribbean Resorts by Travel + Leisure. The on-site amenities are everything you would expect from a top-flight Marriott, and the surrounding jungle wildlife provides ample opportunity for more fun adventures. And, if you are looking for great nightlife, head into nearby Basseterre for a fun night on the town. 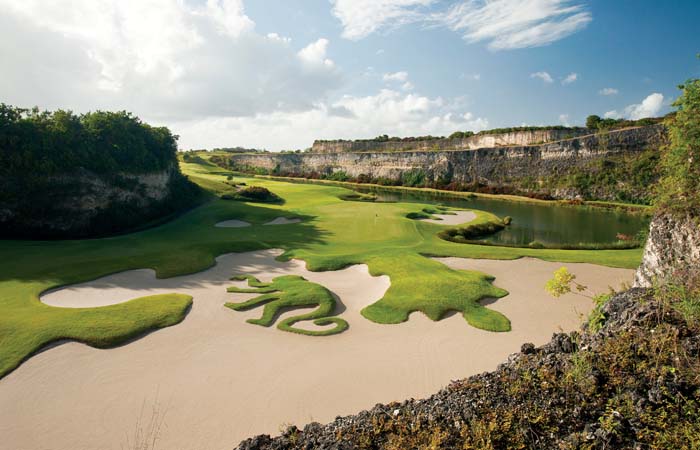 While the island of Barbados may be small, it is certainly packed full of fantastic golf courses and resorts. About 15 minutes south of Apes Hill, directly on the coast, is the Sandy Lane Resort and the Green Monkey Golf Course. Another Tom Fazio design, Green Monkey was carved directly out of a gigantic limestone quarry, and many of the holes are lined with the exposed rock formations, creating a beautiful contrast with the lush green vegetation. Opened in the 1960s, the Green Monkey is ultra-luxurious, and features dramatic elevation changes and exotic wildlife. The 16th hole has the course’s signature design – a giant grass monkey in the middle of a large bunker.

The Sandy Lane Resort may be one of the most luxurious and exclusive in all of the Caribbean, and the accommodations, amenities and service live up to that claim. There is also a second Tom Fazio golf course on the property – called The Country Club – and a nine-hole course that was part of the original 18 holes when the property was first built. 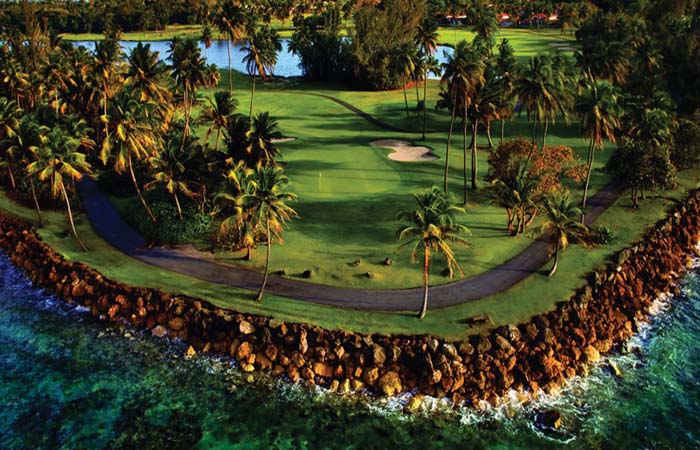 While there are four courses at TPC Dorado Beach, we recommend checking out the West Course (first, then see the rest!). Designed and built by Robert Trent Jones, Sr., all the holes on the West Course run in different directions, making the winds off the Atlantic difficult to figure out, but also presenting some of the best views on the island from almost any hole. The lush vegetation features tall palms and verdant greens for a serene tropical atmosphere that is ideal for a round of golf. Originally built in 1958, the Raymond Floyd Group came in 2002 and added all the on-course, five-star amenities you’d come to expect at a world-class facility.

With three other golf courses in close proximity, TPC Dorado Beach may be the closest thing to golfing heaven in the Caribbean, and the resort itself ain’t no slouch either. In addition to three championship golf courses, Dorado Beach offers plantation-style resort residences, world-class cuisine and beach activities for the entire family. Dorado Beach is also home to the only Ritz Carlton Reserve in the western hemisphere. 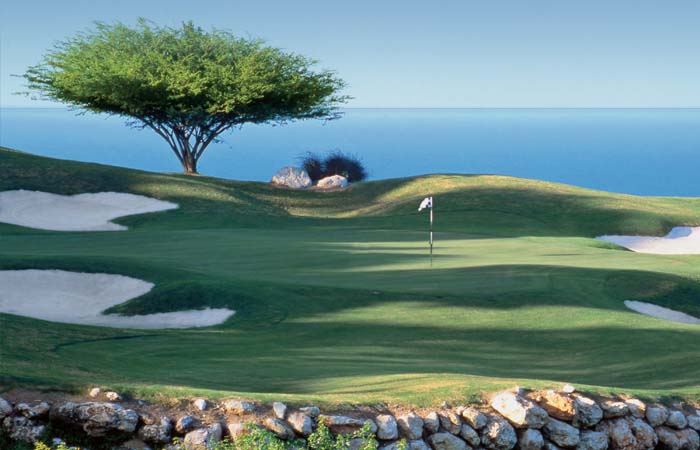 The White Witch Golf Course was designed by Robert von Hagge and Rick Baril on the site of the 4,000-acre Rose Hall Estate in Jamaica. The course is cut through 200 acres of lush foliage and rolling terrain. Rated as the No. 1 Golf Course and No. 1 in Golf Shop Staff service by Conde Nast Traveler, the White Witch is considered one of the finest golf courses in the Caribbean, characterized by mountainous terrain, cool trade winds, colorful foliage and spectacular ocean views from 16 of its 18 holes. The course is named after one of Jamaica’s most famous legends, Annie Palmer, the “White Witch of Rose Hall.”

Along with the golf course is the all-inclusive, adults only Hyatt Zilara at Rose Hall, just a few miles north of the White Witch. The Hyatt is a romantic, adults-only retreat in Montego Bay, featuring pristine beaches and sparkling swimming pools. 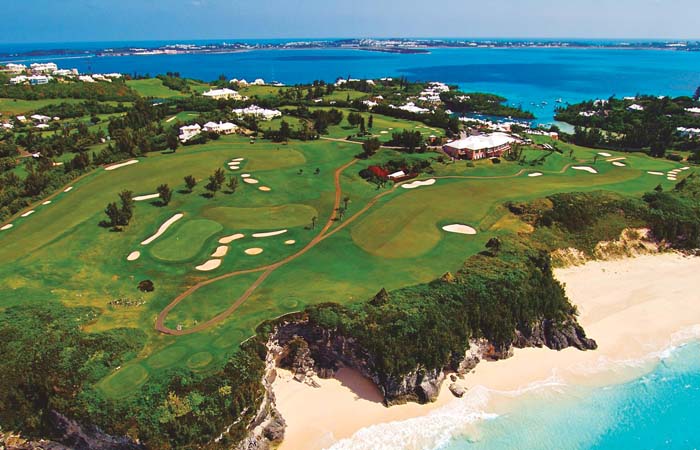 The Mid Ocean Club originally opened in 1922, but was revised in the 1950s by Robert Trent Jones. Mid Ocean rolls perfectly across the undulating topography of Bermuda, and while most of the holes are not oceanside, the Atlantic plays a strong part in the backdrop of the entire golf course. Mid Ocean also has served as the host of several major golf events, most notably the 2007 and 2008 PGA Grand Slams of Golf.  The facility has 20 guest cottages for visitors, and much of the property is lined by sandy white beaches, beckoning for a relaxing afternoon under the sun and in the water. 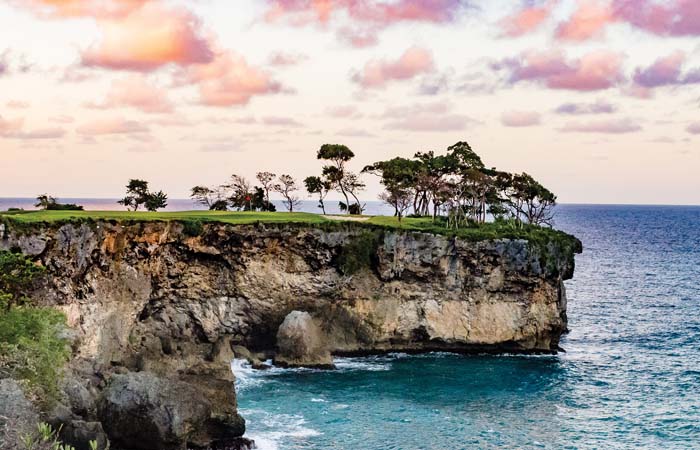 Sprawling over 180 acres of picturesque coastline, the world-class Playa Grande Golf Course, designed by celebrated architect Robert Trent Jones, Sr. and recently renovated by his son Rees Jones, is known as “the Pebble Beach of the Caribbean” by the golf community. With 10 holes playing directly on the ocean, this 7,085-yard course winds along the coastline, providing amazingly open vistas, cliff-side fairways, and sloping greens. The final course designed by Jones, Sr., before his passing, Playa Grande has had a cult following among true golf fans for decades, and is now one of the most popular golf courses in the entire Caribbean.

The luxurious Amanera Resort by the golf course is nestled within more than 2,100 acres of pristine tropical jungle and overlooks the white sandy beaches and the Caribbean. 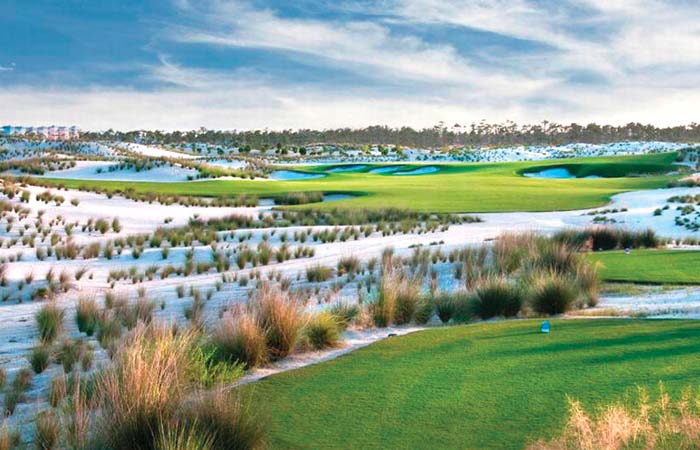 The Albany Golf Course was designed by multiple major champion Ernie Els and officially opened in December 2010. In his design, Els combined the best of links and desert features with windswept dunes and numerous scenic and strategically challenging water features. The fairways are wide and the foliage is sparse, and the winds off the ocean can play havoc with a player’s golf ball. Last year, the golf course played host to the Hero World Championship, and saw the return of Tiger Woods after one of his many long layoffs. The golf course is surrounded by a high-end luxury resort community on the small island of New Providence in the Bahamas. The resort features a wide variety of amenities, including a luxury boutique hotel, a family water park, an adult pool, a spa and fitness center, a children’s clubhouse, a variety of restaurants and bars and a 71-slip mega-yacht marina. 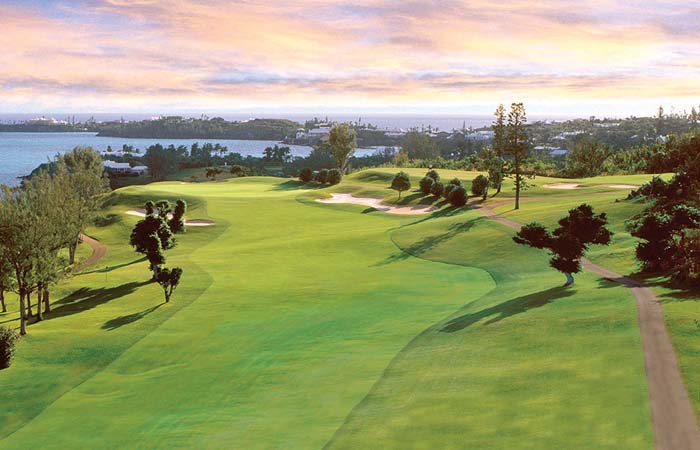 The Tucker’s Point Golf Course has roots as one of the oldest courses in the Caribbean, originally built in 1932, but it was enhanced in 2002 by Roger Rulewich, the former chief designer for Robert Trent Jones. The golf course ebbs and flows through undulating terrain, and most of the tee boxes sit at significant elevation, bring the brisk winds off the ocean into play quite often; plus, many of the holes and greens boast dramatic water and overland views. The course’s five par 3s make up some of the best par 3s in Bermuda, especially the 215-yard eighth and the 225-yard 11th. The Rosewood Hotel at Tucker’s Point is the country’s most sophisticated experience, and offers luxurious accommodations in the form of hotel rooms, suites and formal residences.