The tropics are quiet right now – gone are the days of hurricane-force winds and menacing rainstorms.

We hope it stay like that for quite a while, as Mother Nature has shown she can be quite menacing over warm waters. It was heartbreaking to see the destruction left in the wake of these major storms at many tropical locales; in fact, some are still trying to get back to some sense of normalcy.

Others, though, are already back open for business and awaiting your arrival. This year, bring the sunscreen, sunglasses and golf club, and visit some of our favorite tropical golf destinations.
Trust us: the experiences won’t disappoint, and these places will appreciate the business.

The Abaco Club on Winding Bay

The Abaco Club on Winding Bay is a private, international sporting club and residential community located on the Great Abaco Island in The Bahamas. Acquired by Southworth Development in 2014, the company has infused more than $10 million into the first phase of renovations of the luxury community – most notably into its world-class golf course and two onsite restaurants, Cliff House and Buster’s Beach Bar. 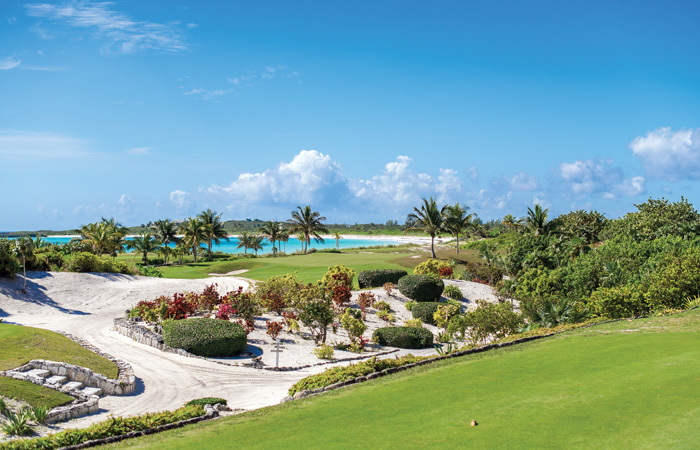 Situated on more than 500 acres, The Abaco Club offers a world of relaxation and five-star resort-style amenities for homeowners and visitors to enjoy – with a 2.5-mile private beach, a top-rated golf course, spectacular water, leisure and sporting activities, fine dining and world-class fishing. The homes at The Abaco Club range from grand oceanfront estate homes to luxurious oceanview cottages to cozy Bahamian cabanas. Put together, they make The Abaco Club one of the most luxurious resort communities on earth.

The Club’s unique “tropical links” golf course has been consistently ranked as one of the top courses in the Caribbean and Mexico. Designed by British course architects Donald Steel and Tom Mackenzie, the picturesque course is set against the sea with rugged rocks, sloping greens and lush flora throughout – and is often frequented by 2016 European Ryder Cup Captain and Abaco resident, Darren Clarke. Recent golf renovations include improvements to the bunkers, greens and cart path, and a brand-new multi-acre practice facility, one of the most extensive in all the islands. www.theabacoclub.com, 242-367-0077

The Dominican Republic’s Casa de Campo Resort & Villas is home to the iconic “Teeth of the Dog” course. Since opening in 1974, “Teeth” is widely recognized as the No. 1 course in the Caribbean and is continually ranked in the top 50 courses in the world. Pete Dye’s design hallmarks are all present: railroad ties, vast waste areas, peninsula greens and tees, hand-sculpted putting surfaces and a unique assortment of pot bunkers. The oceanfront holes — affectionately dubbed “The Heaven 7” – are astoundingly beautiful, causing Dye to famously quip: “I created 11 holes and God created seven.”

Twenty-seven-hole Dye Fore joined Teeth of the Dog in 2002. Its three nines – Chavon, Marina and Lakes – are distinct. Chavon features seven holes running atop cliffs dropping 300 feet; Marina meanders down to a harbor ringed by restaurants and shops, and Lakes is artfully crafted across tumultuous terrain. Golf course architecture aficionados call Dye Fore “the most underrated course in the Caribbean.” 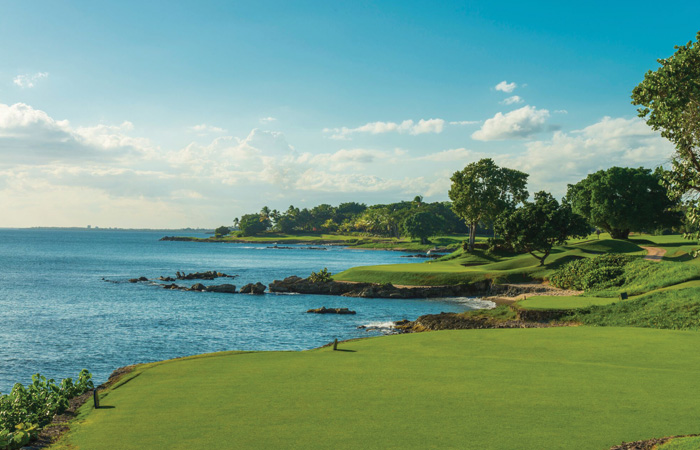 Located in the interior of the property is the resort’s third Dye layout, The Links. The moderately hilly track with tall Bahia grass framing bunkers and undulating greens presents spectacular Caribbean views. Slightly over 7,000 yards from the back tees and playing to a slope of 126, The Links is considered one of the most-forgiving courses Dye has designed.

Start with the Wanamaker Course, named in honor of Rodman Wanamaker who inspired the birth of the PGA of America 100 years ago. Widely considered as one of the most picturesque layouts in Florida, legendary architect Tom Fazio designed a course that blends seamlessly into its natural surroundings. Fairways routed around wetlands, over gentle hills and through native palmetto and sabal palms make for an unforgettable round of golf, while large bunkers guarding greens provide a risk-reward element that’s hard to find anywhere else in the Sunshine State. 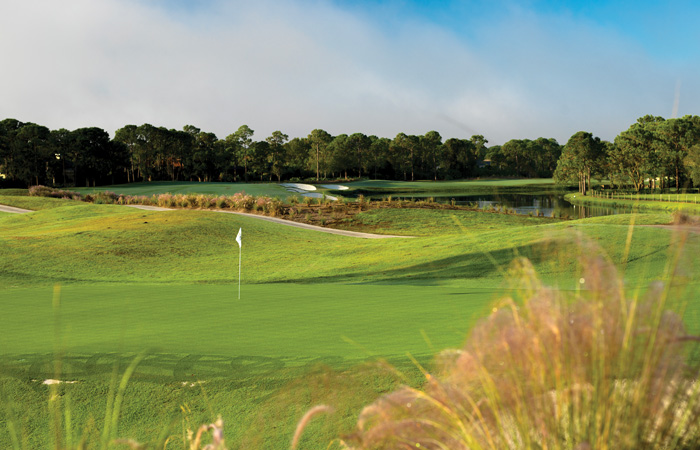 Then there is the Dye Course, which features some of the most elaborate bunkers east of the Mississippi. Designed by the mastermind himself, Pete Dye, and ranked in Florida’s top 20, it’s as beautiful as it is challenging. Deep pot bunkers, vast coquina waste areas and devilish greens treat guests to a wildly entertaining round of golf. Boredom isn’t in the bouquet for the Dye Course.

Named after Samuel Ryder, the namesake and founder of the Ryder Cup, the Ryder Course just completed a renovation project that enhanced the greens and surrounding areas. The layout meanders over rolling hills and through majestic pine trees, and several lakes and ponds line the fairways and guard the greens, requiring golfers to be sharp on tee shots and approaches. But rest easy, large landing areas make it a treat to play for all skill levels. www.pgavillage.com, 800-800-4653

Querencia, set atop the highest point in San Jose del Cabo, Mexico, is one of the top private golf club and luxury communities in the world. The 1,800-acre gated enclave’s wide assortment of residences consist of custom ocean- and golf course-view homes nestled along the sparkling Sea of Cortez.

The community recently acquired new ownership, whose bold vision includes ambitious growth plans to expand on creating “the private side of Los Cabos,” and have a greater focus on family-oriented vibrancy. One of Querencia’s main projects in the coming months is to debut its exclusive Q Ocean Club featuring resort-caliber amenities and a wide spectrum of luxuries.

At the heart of Querencia is its Tom Fazio-designed golf course, rated among Mexico’s best. The layout spans 300 acres, winding through deep arroyos and climbing to cool, arid plateaus with endless vistas. Harmonious transitions from hole-to-hole, subtle breaks, contoured fairways and uniquely shaped bunker stations make this course a true gem in the Baja Peninsula. It’s a challenging yet playable golf experience that both daunts and delights its players. Offering spectacular views from every hole, Fazio’s Querencia celebrates the natural elements and stunning views of the surrounding area, all within a private but relaxed club atmosphere. www.loscabosquerencia.com, 888.236.2229

Notable professional golfers Jesper Parnevik, David Leadbetter and Hale Irwin have notched rounds here, and that list grew substantially in May. That’s when Reserva Conchal hosted the PGA TOUR Latinoamerica Essential Costa Rica Classic. The inaugural tournament – sponsored by the Costa Rica Tourism Institute – was the country’s first-ever PGA TOUR event in more than 30 years. The players enjoyed the course and tournament so much, the TOUR renewed the event at Reserva Conchal in 2018. 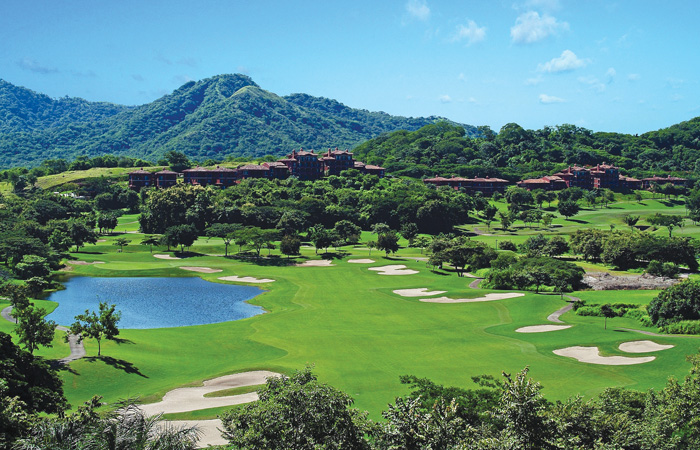 Ranked as the best course to play in Costa Rica by Golfweek and Golf Digest, Reserva Conchal was also the first course in the country bestowed certification by Audubon International. But it’s not just the golf course that gets acclaim – its world-class practice facility and learning center offers four green complexes, bunkers, chipping and approach areas, and an expansive practice tee. Single- and multi-day golf clinics are offered, including the PGA TOUR Academy featuring certified instructors from famed TPC Sawgrass.

Golf reigns supreme at Reserva Conchal, but other outdoor activities rank a close second when it comes to enjoyment. Relaxing by the beach is a must, and there’s no better place to soak in the rays than at the resort’s beach club. The adventurous side of you can also explore Reserva Conchal’s 96-acre wildlife refuge, which is home to more than 30 species of birds, 12 species of mammals, reptiles, amphibians and native plants and flora. Deep-sea fishing expeditions, horseback riding and the surf town of Tamarindo are all nearby. www.reservaconchal.com