But with the debut of his new Rancho San Lucas course, which opened last February in this golf-heavy region, Norman could author a new song, ’Riding a Mexican Hot Streak’. Because on the heels of his excellent PGA Tour site in Mayakoba and the other Mexican courses he has done or is currently doing in Cabo and elsewhere, he certainly seems to have found his south of the border sweet spot.

The resort community’s Greg Norman Signature course is located near the vibrant town of Cabo San Lucas, and the associated Grand Solmar Land’s End hotel, an exclusive and luxurious property, right next to the harbor.

The all-inclusive Grand Solmar Land’s End, built in 2011 and semi-obscured by massive rock formulation, is nice enough to have hosted the President of Mexico during a recent visit. It has  enough variety in large pools and swim-up bars to enable guests to see the Cabo sunsets and the huge pounding surf in comfort. 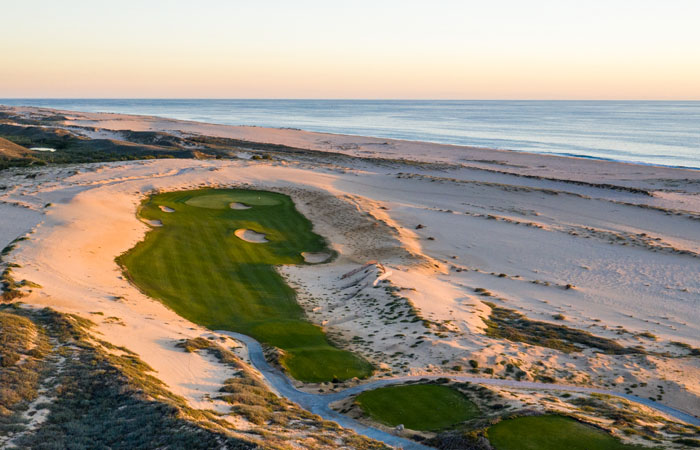 Each room at the Grand Solmar Land’s End is a suite with a balcony that offers scenic ocean views. There are  a variety of oceanside restaurants as well as a full sports bar, a spa, kids club and plenty of outdoor lounging spaces. The Grand Solmar at Rancho San Lucas reopens in October after a brief closure due to Covid.

The more adventuresome can actually walk from the back of the resort to the famous Lovers beach and Land’s End rock formations.

Norman’s first 18-hole course in Los Cabos, 30  minutes from the airport via a new highway,  certainly showcases his maturity and growth as an international golf course architect.

Some of his courses in the U.S. may have been underappreciated, but this par-72 layout, stretching to 7,210 yards from the back tees, is brilliant for the way it incorporates not only the ocean views, but the all-encompassing desert scenery. “I really think course has the opportunity to help lift the next evolution of golf in the Cabo area,” said Rancho San Lucas Director of Golf Brad Wheatley, who has overseen nearly every significant course in the area since he showed up from West Texas to work at the Jack Nicklaus-designed Palmilla Golf Course in 1992 before moving on to Cabo del Sol and many, many others.

“What Norman has done with the course and what they are building here can be really, really special,” Wheatley added.

Norman himself has played and designed hundreds of golf courses all over the world, but said the landscape and setting at Rancho San Lucas took his breath away.

“I walked the initial landscape of more than 100 courses I’ve designed, but when I came over the crest at Rancho San Lucas and saw the ocean and the desert and the dunes, I knew this could be a really special place,” he said at the grand opening last winter. 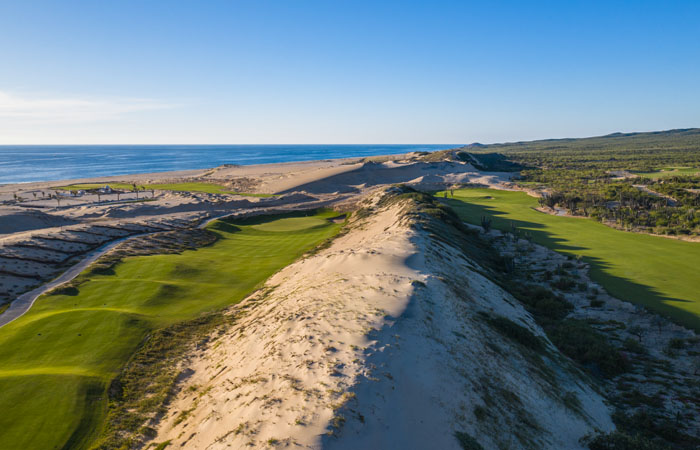 Turning off the busy highway to the development of the same name, you drive down steep hills and narrow winding passages, but when you get close enough to see the Spanish Missionstyle clubhouse with the Pacific Ocean behind and the well-groomed practice facility in front, it overwhelms you with curb appeal.

The par-5 first hole at Rancho San Lucas stretches to 543 yards from the back tee and parallels the ocean. It is similar to many in the area, but after that Norman continues to build good holes, stacking one after another, as the top courses do.

The par-4 second has huge sand dunes running along the right side of the fairway with the Pacific in the background. The par-3 third is as close to the water as you’ll get,  with magnificent homes in the Norman Estates community in view on the left. At nearly 200 yards, this windswept hole provides all the challenge you could want.

The course turns inward after that with more huge dunes, sloping foothills and hundreds of cacti. 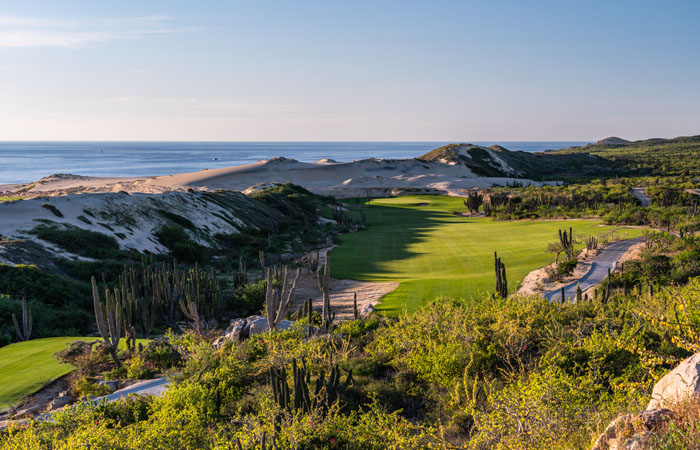 The Norman design at Rancho San Lucas is testament to the fact that any architect or golfer can build dramatic, spectacular layouts with equally spectacular oceanside scenery, but the really good ones can do it with natural surroundings, showcasing their skill and creativity by using the native  elements at hand.

That’s exactly the case here, with the par-4 6th hole serving as a prime example. The tee boxes are built around, between or near two huge cardon cacti near the teeing area. There is a large desert wash to the left and more brush along the right side.

Shot placement is paramount on many of the holes, with a full-filled thrill ride up and down the land at the former cattle ranch owned by the Bulnes family, owners of the Solmar Group that developed Rancho San Lucas.

The par-4 14th is a vivid ribbon of green fairway with dunes and ocean on the left, distant mountains on the right. By the time you get to the par-3 17th hole and its  island green, you’d think Norman is just  showing off his architectural re skills and experience. It’s a mere 161 yards from the back tees, the shortest par 3 on the course, but one filled with the most danger.

The finishing par 5 is uphill with more dunes, more desert and more distinctive sod-walled bunkers to an oval green with the large clubhouse in the background.

While you need to stay at one of several hotels within the Solmar Hotels & Resorts collection or own property at Rancho San Lucas to play here, it’s a small price to pay for an outstanding golf layout as part of the new wave of Cabo golf luxury.

A new Four Seasons Resort, currently the only luxury property on the East Cape, is an hour’s drive northeast of the international airport. Anchored by a new Robert Trent Jones,Jr.-designed golf course, the Costa Palmas resort community is the latest addition to the Cabo luxury golf market. 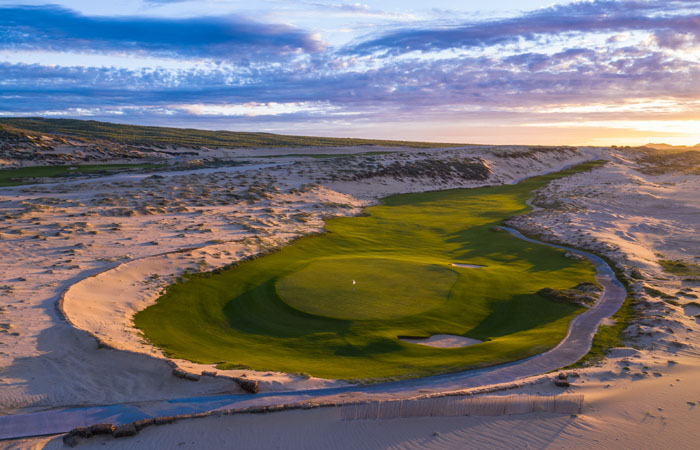 Jones has described the sprawling 7,221-yard, par-72 course as a  “golfing symphony” enacted in three movements: dunes, highlands and marina.

While there are very few water holes or overly dramatic features on the course, Jones was able to add another very unique feature for Cabo golf travelers. Costa Palmas is a walkable golf course, with short distances from green to tee.

“I wanted to give you something to look at with the mountains and the dunes and the water and give it a different feel for a Cabo golf course,” Jones said. “In reality, it’s three different experiences in one course and the fourth is the invisible element in Cabo, the wind.

“Always remember, I’m playing defense with my courses. You are the attacker, I’m the goalkeeper.”

But because this is still Cabo and next to the luxury leader Four Seasons Resort, it’s not all sweat and struggle at Costa Palmas. 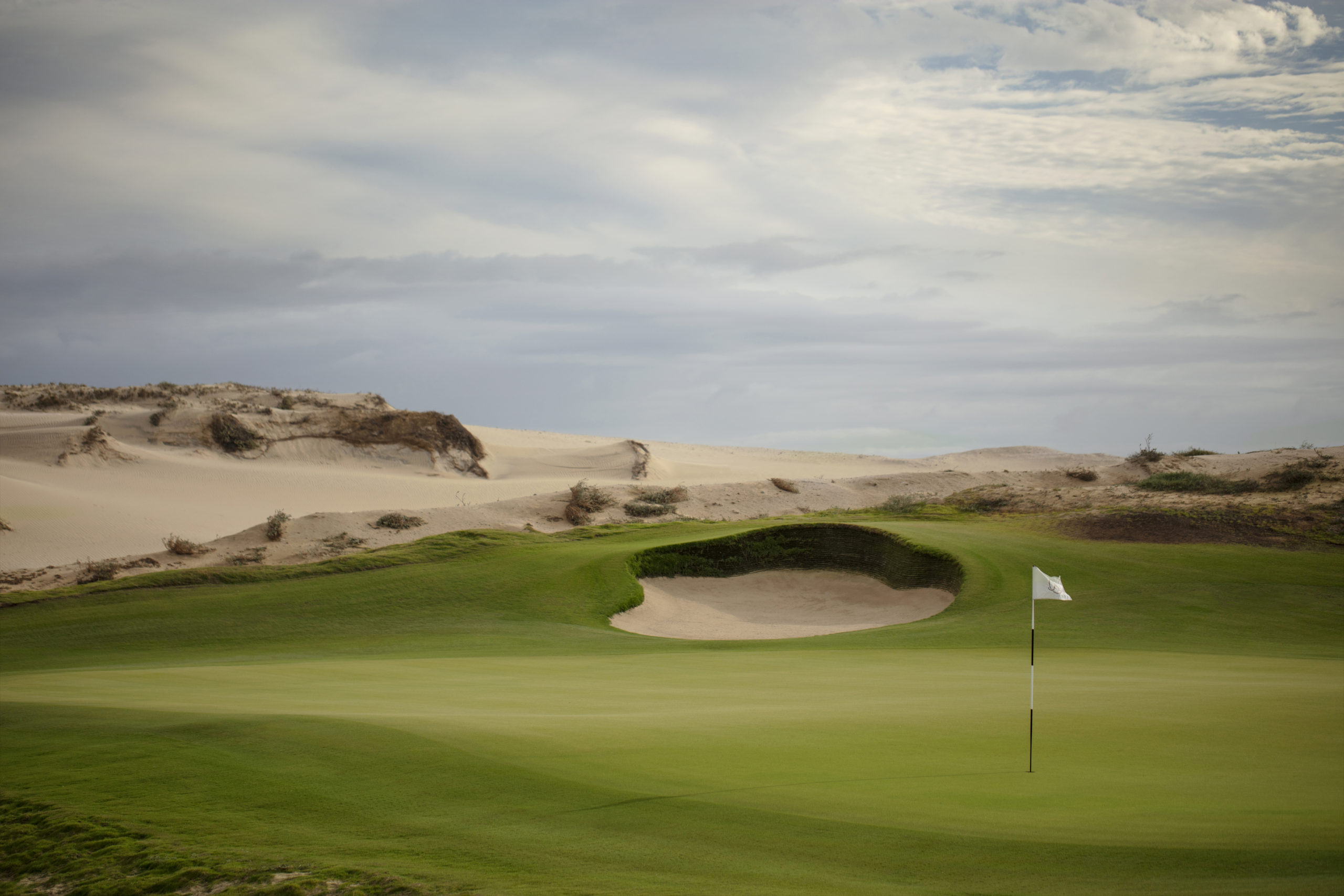 After par-5 7th hole, golfers can pause at a deluxe cantina, Lucha Libre, which serves all manner of food, from steak tacos to quesadillas, and all kinds of drinks, from water and soft drinks to those considerably harder.

The Four Seasons Resort, where you must stay to play the course, is offering a special Costa Palmas golf package with a cart or walking, golf balls, and all food and beverage at both Lucha Libre and Bouche’s Café, which is right next to the pro shop and a 32,000-square-foot putting green.

“It’s the Four Seasons, so there is luxury, sure, but it’s also the East Cape, so we wanted it to be wild and free and be able to ride horses on the sand and see the sand dunes and hiking,” said Jason Grosfeld, CEO of IronGate,  which oversaw the project development.

Another great feature Jones built, something he or his famous father never thought about when they started several decades ago, is the huge putting green and practice facility which can be used by families who just want to putt and play, or those who want to work on their short game.

“It gives people a taste of the game, plus they can have an ice cream while they’re chipping and putting,” Jones said.

The originator of the new wave of Cabo golf courses, the nearby Jack Nicklaus-designed Quivira Golf Club is still his most scenic. 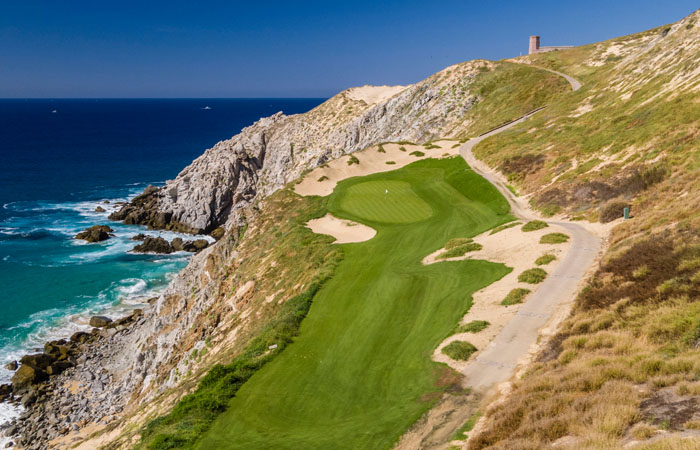 When opened by Nicklaus and his team in December of 2014, he won instant praise for its spectacular views, especially on holes 5,6, 7 and 13. But in the ensuring years, it has matured into a total resort with several luxury hotels, a booming public food market, sports bar, water sports, plus the ocean, waves, beach and killer sunrise/sunsets which show up every day at no extra charge.