Thank God 2020 is in the rearview mirror!

Truer words have never been spoken … the year was an incredibly trying one for us all. In some way – and unfortunately for some, in many ways – COVID-19 had a maddening effect on us all.

The golf industry also was greatly affected by the coronavirus, but in many instances the results were very positive. Many people learned golf for the first time because of its outdoor benefits. Others returned to the game and realized how much fun it was; while serious golfers had yet another excuse to hit the links.

Thus, tee sheets at both private and public courses were busting at the seams. And golf resorts and destinations – they too were constantly busy, although they had to call an audible. Rather than chasing down golfers from afar, they focused on those golfers who could visit them from drivable markets.

Fingers crossed, 2021 will be totally different and more like the norm. We (hopefully) can go back to congregating with our family and friends, dining at our favorite restaurants, supporting our favorite establishments and traveling to outstanding golf destinations.

Check out these worthy golf destinations that are yearning to host you and your golf pals this year.

The Dominican Republic’s Casa de Campo Resort & Villas is home to the iconic “Teeth of the Dog” course. Since opening in 1974, “Teeth” is widely recognized as the No. 1 course in the Caribbean and is continually ranked in the top 50 courses in the world. 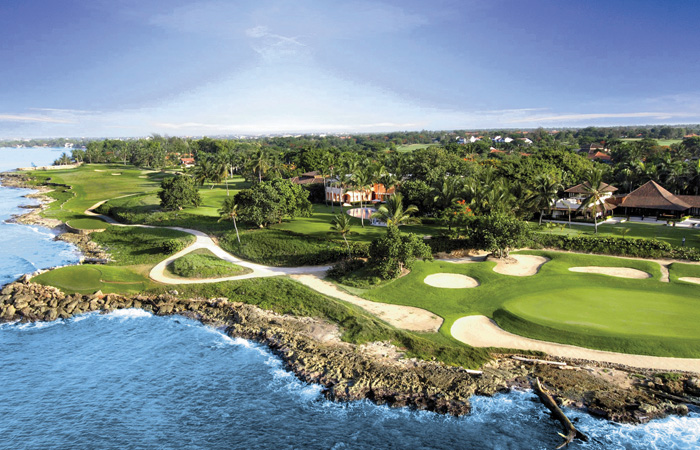 The 27-hole Dye Fore joined Teeth of the Dog in 2002. Its three nines – Chavon, Marina and Lakes – are distinct. Chavon features seven holes running atop cliffs dropping 300 feet; Marina meanders down to a harbor ringed by restaurants and shops, and Lakes is artfully crafted across tumultuous terrain. Golf course architecture aficionados call Dye Fore “the most underrated course in the Caribbean.” 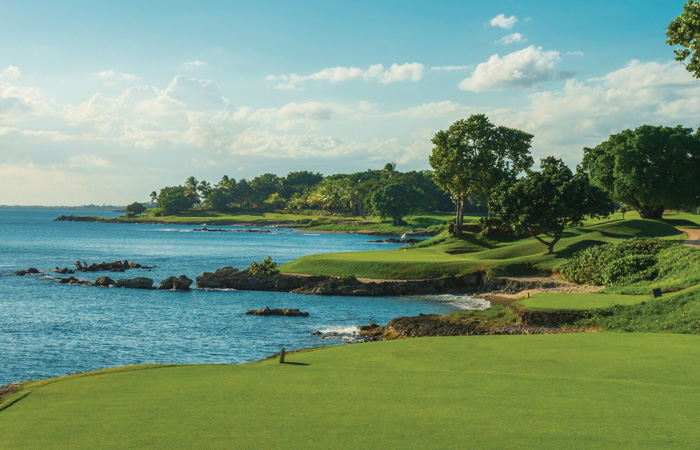 Located in the interior of the property is the resort’s third Dye layout, The Links. The moderately hilly track with tall Bahia grass-framing bunkers and undulating greens presents spectacular Caribbean views. Slightly over 7,000 yards from the back tees and playing to a slope of 126, The Links is considered one of the most-forgiving courses Dye has designed. www.casadecampo.com.do, 800.877.3643

This is no typo – one of the most revered venues in championship golf is available for public play. In 2020, Firestone announced an exclusive opportunity for non-members to reserve a limited number of stay-and-play packages and experience its celebrated on- and off-course offerings. 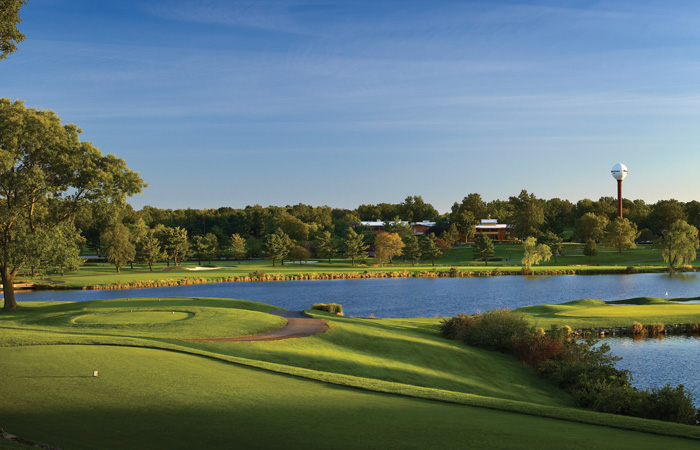 Legends such as Palmer, Nicklaus, Trevino and Woods have all walked the South Course’s hallowed fairways … and cursed them. “The King” made a triple bogey at the par-5 16th hole of the South Course. After the round, Palmer referred to the hole as “The Monster.” The name stuck and a plaque on a bridge near the 16th green honors The King and his three victories at Firestone.

Located across the street from the Firestone clubhouse, the North Course is a splendid Robert Trent Jones design that opened for member play in 1969. Marked by numerous lakes and streams, the North Course has played host to both the American Golf Classic and World Series of Golf. Several publications have listed the North Course among the “Top 100 Modern Courses”.

Formerly known as the West Course, the Fazio Course is named after Tom Fazio, who redesigned the layout in 2001. A links-style design boasting striking views of the club and surrounding landscape, the Fazio Course is built around the perimeter of Firestone’s famed South Course and is the home of the Ohio Senior Open. Currently, the layout is undergoing a bunker enhancement project that includes removing 18 bunkers and renovating the remaining 51. Several bunkers will be reshaped, and the Better Billy Bunker system will provide optimal drainage and reduction of washouts during inclement weather. Once treated, the bunkers will be filled with Best Signature 720, a beautiful white sand used on the most exclusive clubs in the U.S. The bunker enhancement project is set to be completed by this spring. 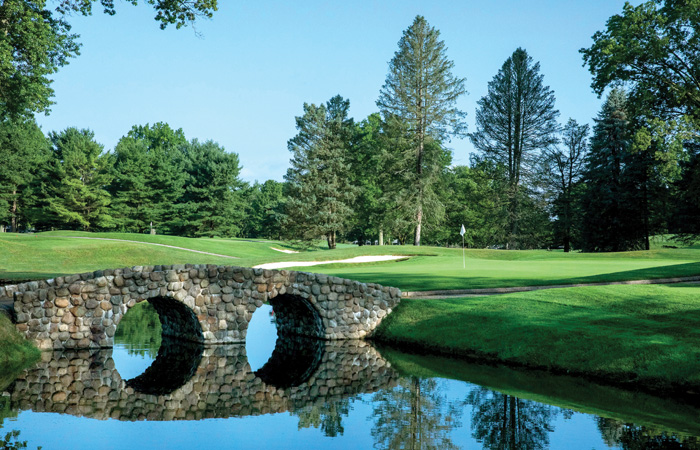 To pay homage to more than 50 years of incredible golf history, the clubhouse includes 30 dormitory-style rooms, each featuring a view of all three golf courses. For a resort experience at Firestone, there are 57 golf villa rooms sprinkled throughout the property. www.firestonecountryclub.com 330.644.8441

“Full Cry” is a hunting term describing the call of hounds that have found the scent and are in hot pursuit of their mark. The superb and fun-to-play 18 negotiates the gently sloping terrain below the inn’s perch on the property’s high ground.

When stepping on the first tee, the layout’s beauty and clarity of the challenge are wonderfully displayed.  Dye did a masterful job of using “old world” architectural traits found at the classic courses of Scotland and Ireland. Except for one hole, the greens have open fronts and are approachable by low “links-style” run-up shots or through the air, allowing for great shot variety. 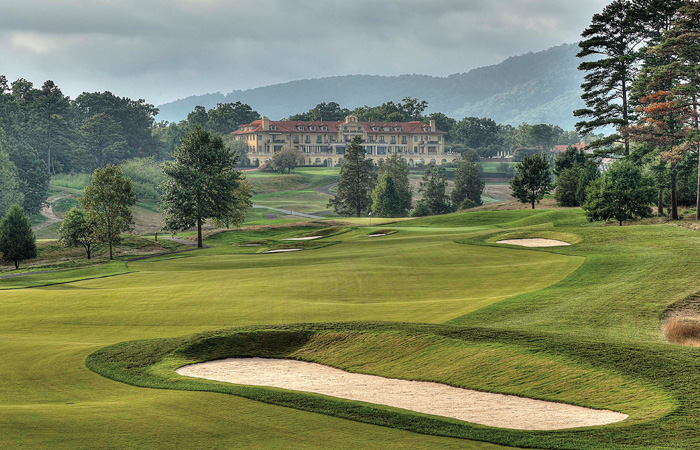 The last three holes on the back nine are as fine a finish as you’ll find. The par-3 16th is modeled after the famous “Redan” hole at Scotland’s North Berwick. With train tracks running parallel the entire length of the right side, the superlative par-5 17th is called the “Railroad Hole” and plays much longer than the yardage due to fighting the prevailing wind.

The tee box of the demanding par-4 18th provides the crescendo of the layout with a panoramic view of the sprawling Hunt Country, serene mountains off on the horizon and inn above. Full Cry truly is a delightful place to tee it up and showcases Dye’s imagination and genius. www.keswick.com/page/golf; 888-778-2565

A convenient three-hour drive along I-35 from the Minneapolis – St. Paul metro area, Giants Ridge boasts two award-winning layouts, The Quarry and The Legend.

The aptly named Quarry is built on the site of a former sand quarry and iron ore mine, and dramatically raised tees and hazards provide spectacular Iron Range vistas. Carved out of the Superior National Forest, The Legend is a true “northwoods” course, featuring towering pines, giant fairways and majestic views of Wynne and Sabin Lakes. 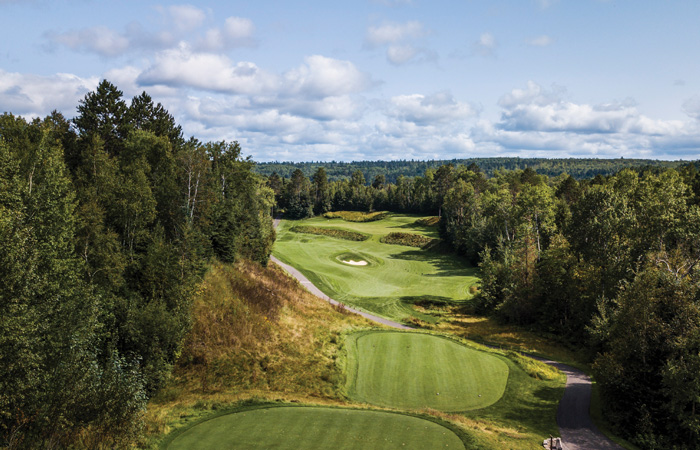 The list of awards and accolades bestowed to Giants Ridge and its courses is unrivaled. GOLF Magazine ranked The Quarry among the top-10 best overall courses in Minnesota, and was the only public layout on this revered list.

Earlier this year, Golf Digest highlighted The Quarry’s par-4 13th hole in its “America’s Best 18 Holes Since 2000” feature that appeared in the August 2020 print edition. Golf Digest also bestowed its coveted “Editors’ Choice Award” in the “Best Golf Resorts in the Midwest” category for 2020 to Giants Ridge. Celebrating the “best of the best” golf destinations, Giants Ridge was one of only eight resorts listed in the Midwest and the only destination in Minnesota. Other prestigious properties named include The American Club, Arcadia Bluffs, Erin Hills, Forest Dunes, French Lick, The Inn at Bay Harbor and Sand Valley.

Opened in 2008 to critical acclaim, Pound Ridge is in tony Westchester County, roughly an hour from Manhattan and just minutes from the financial and business hubs of Greenwich, Stamford and Norwalk, Conn.

Crafted by Pete Dye, his son Perry (of Dye Designs) and long-time construction manager/lead shaper Michael Langkau, Pound Ridge is a wall-to-wall bentgrass facility, hewn from 172 acres of magnificent cliffs, streams and wooded hills. Dramatic rock formations and boulders were left onsite by the Dye team, creating one of the most visually stunning settings for golf in the United States. More than 14,000 linear feet of rock walls frame a strikingly natural property graced with thousands of trees, subtle wetlands and (in strategic locations) severely sloped hills. 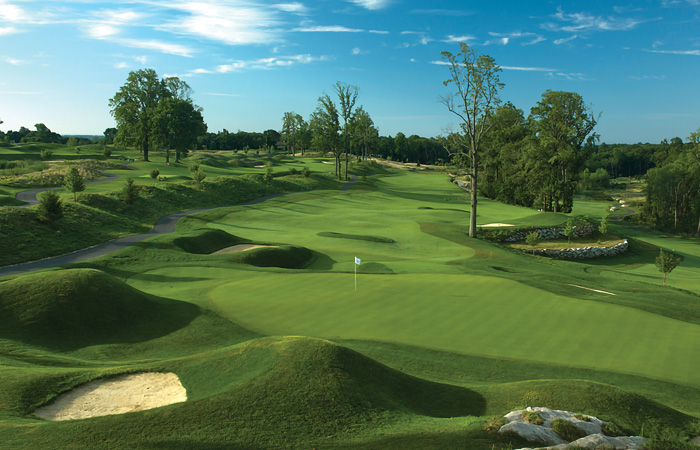 Notable holes: the par-5 13th, home to “Pete’s Rock,” a giant boulder that rests in the middle of the fairway; and the par-3 15th hole, dubbed “Headstone,” which is flanked on the right by a large rock outcropping that protrudes into the elongated, 9,000-square-foot green. www.poundridgegolf.com, 914.764.5771