The honeymoon phase has worn off for new Colonial title sponsor DEAN & DELUCA, and now in its second year as the tournament’s main supporter, the gourmet grocery store giant is poised to continue the long-standing tradition of producing one of the most popular and successful tournaments on the PGA Tour.

In its maiden voyage last year, the DEAN & DELUCA Invitational got what almost every fan in the gallery wanted – a thrilling victory by famed Texan Jordan Spieth. The 2016 tournament produced some exciting moments, nail-biting shots and a star-studded leaderboard that saw the former Texas Longhorn come out on top by three strokes. Now, Spieth returns to lead the field full of some of the best players from not only the U.S., but around the world, in the quest for the coveted plaid jacket and DEAN & DELUCA Invitational trophy.

It is an event that is the very intersection of classic history and modern professionalism, as the old, familiar Colonial feel – the hollowed grounds that Ben Hogan once patrolled, the stately clubhouse and towering trees – merges with the modern technology and excitement of today’s PGA Tour. 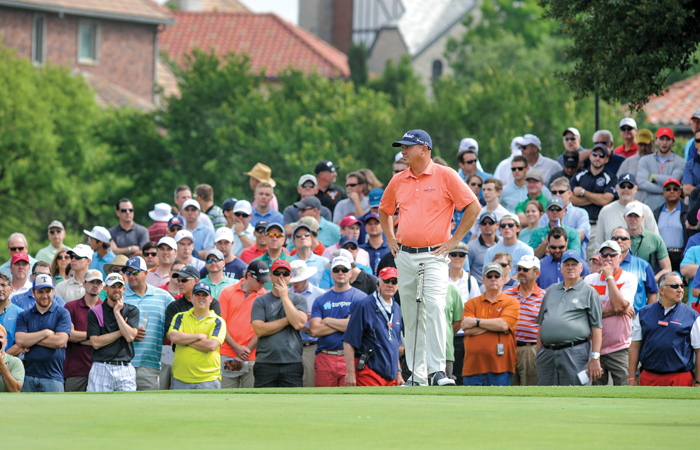 Alright, first thing’s first – who’s going to be there?

With the vast history of the event at Colonial, the wonderful golf course and the deep connection to Texas legend Ben Hogan, the DEAN & DELUCA Invitational is always going to have a top-flight field, and this year is shaping up to be no different. Even though players have until the Friday before the event begins to accept an invitation, the field already features some heavy hitters.

Eagerly defending his crown will be local favorite Jordan Spieth. The No. 5 player in the world earned his first victory in his home state last year, and you can bet he won’t give up the title without a fight. Joining him are fellow Texans Ryan Palmer (who teamed with Spieth at this year’s Zurich Classic) and Martin Piller, defending PGA Champion Jimmy Walker (also a Texan) and recent champion at the Valero Texas Open, Kevin Chappell. You’ll also get appearances from trick-shot-turned-PGA-Tour-winner Wesley Bryan, big-hitting Tony Finau, and fan favorites such as Jason Dufner, Matt Kuchar, Charley Hoffman, Zach Johnson (a two-time Colonial champion), Ryan Moore, Webb Simpson, Brandt Snedeker and Boo Weekley.

We expect the already impressive field to grow in the weeks leading up to the tournament, as some of the other big-name players get their schedule set for May. 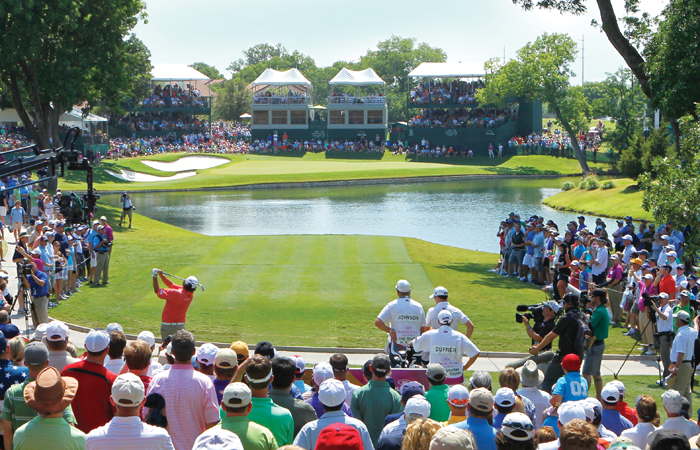 What’s there to do for spectators when we aren’t watching golf?

For years, the tournament at Colonial has been lauded as one of the best atmospheres for spectators, not only for viewing the action, but also for the ancillary activities that surround the tournament play. This year is no different for the DEAN & DELUCA Invitational.

On Thursday-Saturday, starting at 5:30 p.m., patrons can enjoy live music for free in Frost Park as part of the Frost Park Concert Series. Each show is open to anyone, and you don’t have to purchase a ticket to the tournament to come to the concert.

For those that are attending the actual tournament, Prince Street (presented by PlainsCapital Bank) is the place to hang out while taking a break from watching golf. Formerly dubbed Colonial Main Street, Prince Street is the center of patron activity during the tournament. Here is where you will find all the food and beverage vendors, as well as shopping, expos and product sampling from the Prince Street vendors, which include Tito’s Handmade Vodka, TX Whiskey, Bridgestone, GEICO, All Pro Classics and more.

At the main entrance to the grounds you will find Frost Park, which is where the free concert series is held throughout the week, as well as various activities and fan experiences. You can also check out the Social Media Zone, presented by D&M Leasing, a new venue next to the Colonial Grille that is open to all tournament guests.

Sounds great! What about on the course … where should we go?

Anyone who knows anything about Colonial knows that the place to be during the tournament is the 13th hole. Dubbed “The Famous 13th,” it can play anywhere from a wedge to a mid-iron, and is a daunting shot over water, especially when the winds swirl. Patrons and hospitality stands line the entire left side and back of the green, creating an amphitheater-like feel that really ratchets up the pressure and the excitement. The hole routinely produces double bogeys, and the entire tournament can be decided with that tee shot on Sunday.

The area surrounding the 13th is a hub of excitement and a convergence of a couple holes, so even if you can’t get a great few of the action on the par 3, there are plenty of other things to see. Standing near the 13th tee, you can watch players tee off on the treacherous par 3 over water, see tee shots on the 14th hole, approach shots and greenside action on 12 and second shots on the par-5 11th.

One of our favorite places to stand is either on the first tee or in the first fairway. For some reason, crowds aren’t exceptionally large near No. 1 (especially on Thursday and Friday), and being a reachable par 5, everyone hits driver and (almost) everyone goes for the green in two. For a more quiet experience, check out the bleachers behind the eighth green or anywhere down the left side of the 17th fairway. And, of course, there is always the Horrible Horseshoe, hole Nos. 3-5. One of the hardest stretch of holes on the PGA Tour, this is a great place to hang out and see the best golfers in the world truly battle to make par.

Daily Grounds tickets are $50 for Wednesday through Sunday. Weekly Grounds badges are $125 and Champions Club badges are $235 (or $90 for a single day). Youth badges for children ages 13-17 are $15 for Wednesday-Sunday, and children 12 and under are free. Admission for Monday and Tuesday is also free. For more information or to purchase tickets, call 817-927-4280 or visit www.DeanAndDeLucaInvitational.com. Tickets are not sold at course entry gates during the event; tickets must be purchased in advance. 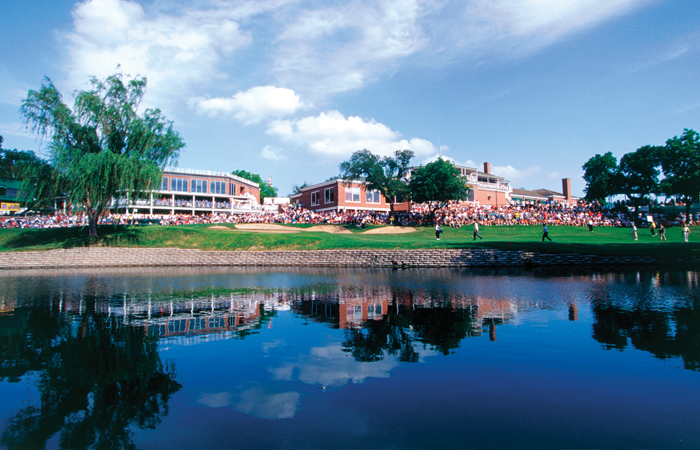 PURSE:  $6.7 million
WINNER’S SHARE:  $1.206 million
TELEVISION: All four rounds are scheduled to be televised live from Fort Worth on The Golf Channel and CBS.
Thursday and Friday 3-5 p.m. on The Golf Channel
Saturday and Sunday 2-5 p.m. on CBS
DEFENDING CHAMPION: Jordan Spieth (-17)
CHARITIES: Cook Children’s Medical Center is the tournament’s primary beneficiary. The tournament also participates in the Birdies for Charity program, which benefits dozens of local charities. The program generated over $11 million for Tarrant County charities in 2016, recognized as one of the top Birdies for Charity programs on the PGA TOUR.
TICKETS: Admission is free on Monday and Tuesday of tournament week. Daily Grounds tickets for Wednesday through Sunday are $50. Weekly Grounds badges are $125 and Champions Club badges are $235; single day Champions Club badges are $95. Youth badges for children ages 13-17 are $15 for Wednesday-Sunday, and children 12 and under are free. Other ticket packages and parking passes are available. For more information or to purchase tickets, call 817-927-4280 or visit www.deanadndelucainvitational.com. Active duty military, active reserve, active guard and military retirees receive up to four complimentary tickets.
PARKING: Public parking at Farrington Field on University Drive or the Rockwood Lane Lot on Rockwood Lane is $15 per day in advance or $20 cash at the lot on day of parking. Practice Round parking Monday and Tuesday is free at Farrington Field. Premium Parking available Thursday-Sunday at TCU for $50 per day, which includes shuttle to clubhouse. Weekly Premium Parking pass is $250. There is also free bicycle parking in Frost Park Thursday-Sunday.
SPECTATOR NOTES: Mobile devices must be on silent at all times. Calls allowed in restricted areas only. The following items are prohibited on the course: large purses or bags, audible pagers, firearms, backpacks, clipboards, cameras (not allowed Thursday-Sunday), glass containers or alcohol. These items will be confiscated if brought to the tournament. All small purses or bags are subject to search.
AUTOGRAPH POLICY: Posters and autograph items larger than 8” x 12” should not be brought to the tournament. Clipboards are not allowed and will be confiscated.
INTERNET HOME PAGE: www.DeanAndDeLucaInvitational.com