Grand Oaks in Grand Prairie has worn many hats over the years. Originally opening in 1972, it has been Grand Prairie Country Club, a private course for many years, before opening to the public a few years ago.

Over the last couple of years, they have added some TLC and a multitude of upgrades. The course is visually less claustrophobic due to the removal of multiple trees and some much-needed pruning of others. If there is one thing that is immediately noticeable when you play a few holes at Grand Oaks, it is the size of the greens. They are quite small, and it quickly becomes apparent that your iron game will need to be on point if you expect to score here.

The opening hole of this Don January design is the second longest on the course. It is also the first of the three par-3, three par-4 and three par-5 opening nine. Starting on a par-5 can be a bit challenging when you’re not completely loose, but this one will play as a three-shot hole for most players, so don’t fret if you’re still a little bit cold as you stick a peg in the ground. At 583 yards and back into the predominant south wind, only the biggest hitters will be able to attack in two. Beware if you are one of the few who can try to get there, as water left of the green can collect pulled shots and lead to some big numbers. It’s best to manage this hole as three-shots, hitting a driver and then laying up to a comfortable wedge number.

No. 2 is the first par-4 of this par-71 layout, and it also plays as the hardest hole on the course. At 434 yards, this is a very tight hole that also plays back to the south, meaning on windy spring days, it could be difficult to hit the fairway. The approach is really the first look at just how small some of the greens can be at Grand Oaks. This one can be hard to hit and leaves players with some tricky up-and-down attempts. 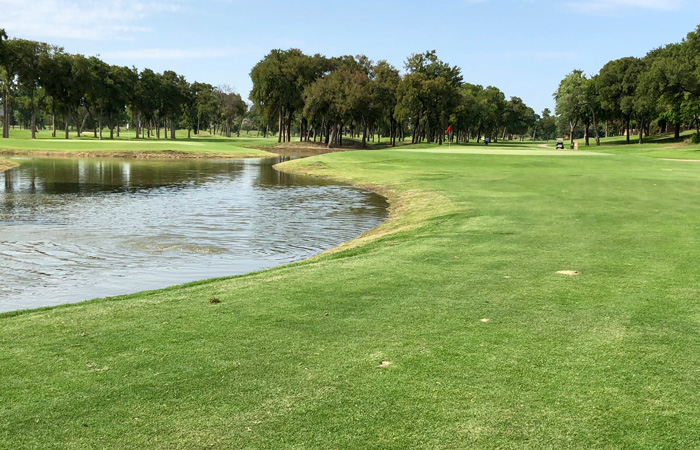 The opening par-3 at Grand Oaks is the third. This tricky, uphill hole plays about 165 from the tips, but is a far more manageable 152 from the blues or even shorter 133 from the white tees. The key here is to clear the small creek in front of the green. There is also a large bunker left of this green which slopes severely from back to front.

After a trio of tough holes to open, the course makes a turn back to the east and becomes a touch more forgiving, especially on days where there isn’t much wind. The par-4 fourth is a slight dogleg right that has more room right than it appears on the tee. A shot to the left center of the fairway is the optimal play but beware of the water left which then curls along behind the putting surface. Hit your ball long of the green and it could find the drink.

The second of the trio of par-3s on the front-nine is the longest. It plays 192 from the back tees to a slightly elevated green. Although when the wind is blowing out of the south, it will be helping; if you get one of those northern fronts that switches the wind, this all of a sudden becomes a tremendously difficult challenge. Finding the small green on this hole is an accomplishment, and a par should be considered one, too.

Another par-5 awaits at No. 6, and this one can be a little more available to score. Playing 554 from the back tees, long hitters can challenge the left side a bit more and potentially get to the putting surface in two. Miss right and that might not be an option, but it’s definitely safer as you aren’t bringing the creek down the left into play. 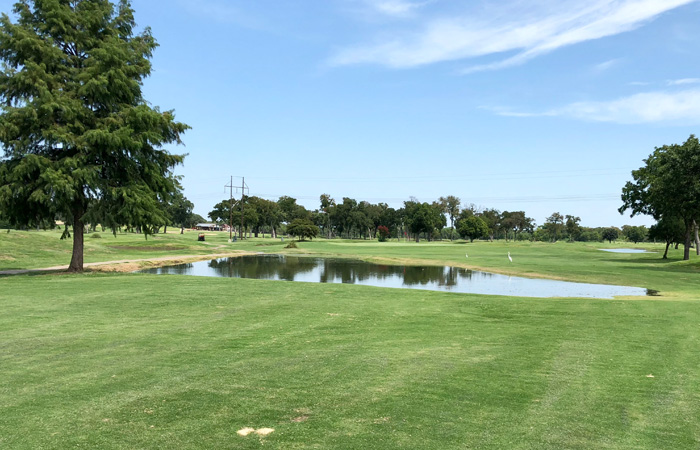 The final par-3 on the front plays 145 yards and is statistically the second-easiest hole on the property. It’s very straightforward, needing only some solid distance control to find the green and have a chance at a birdie.

No. 8 could be my favorite hole on the front nine. Usually playing with some wind help, and at just 374 yards, longer players can challenge the front of the green with a good tee shot. An iron can also be played for position but will leave a longer approach. Beware of the water that wraps around the left and behind the green, as anything just a yard or two long can springboard into the hazard. It’s a fun risk vs. reward hole.

The final hole on the front is also the last of three par-5s on the outward nine. This hole can play a staggering 665 yards from the big-boy tees or can be as short as 411 from the front tees. Again, here January uses the predominant wind direction to help players on this longer hole, as it plays back toward the clubhouse to the north. A creek crosses the fairway and can be a bit of an optical illusion when choosing a club to lay up. A pair of greenside bunkers can swallow balls and make for some nearly impossible up-and-down attempts.

The back nine opens and closes with some tough holes, but in the middle features some designs that were intended to help players with scoring. In my opinion, it is the more enjoyable nine, especially the final six holes.

No. 10 is a hole that can be a bit tricky. A creek crosses the fairway near where a lot of players might be landing their tee shots. Most players (if playing from appropriate tees) should be able to carry it, but mishits can find a watery grave and potentially lead to a big number. The approach shot here should favor the right side of the green, as missing left can lead to a not-so-friendly up-and-down attempt. 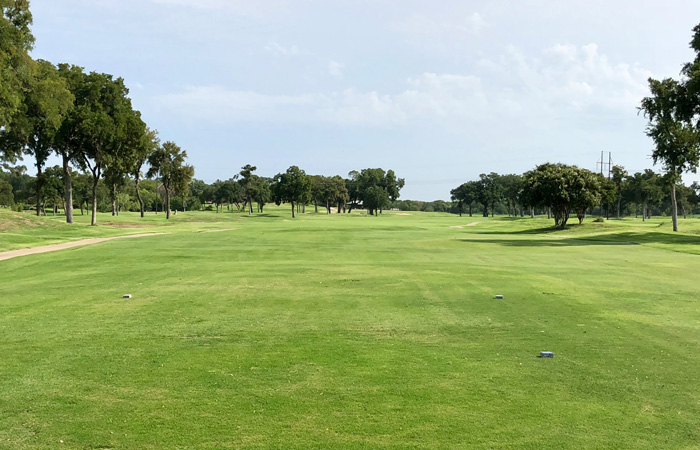 Full disclosure: if there is one hole I really don’t care for at Grand Oaks, it’s the par-5 11th. Not because of the design, but mainly because it always eats my lunch. Any par-5 that requires a decision on whether to hit driver can be a little funky. That being said, you can certainly hit a driver at the 11th, but it needs to be absolutely perfect. Anything a little left of center and a driver is too much club. Most players will choose a three-metal or hybrid and play for position. That leaves a layup over a creek to a wedge zone. It’s a fun hole, but it’s visually intimidating and can lead to many players over-thinking their way to a double-bogey or worse.

No. 12 is one of the two par-3s on the back. It plays almost 250 yards from the tips, with water short. So this is another example of why you need to pick the proper tees for your length and skill set. Here again, the hole looks to be extremely long when you pick up the scorecard, but if the wind is blowing from the south, it won’t play that long. Now, if you happen to catch one of those days where the wind is from the north at 25, this may be all you have in the bag. It’s a great test for any player at any skill level.

The final six holes at Grand Oaks can be a lot of fun. The par-4 13th is great for the bomber, as it can lead to a real scoring opportunity. Players who can cut off a little of the subtle dogleg can get a scoring club in-hand and do some damage.

The last par-3 of the day comes at No. 14. Playing at approximately 195 from the back tees, this hole is very much “what you see is what you get.” Avoid going long, as when the course is playing firm; anything long can bound O.B. behind the green. This hole can play as a bit of an optical illusion, as well, as there is almost zero elevation change from tee to green.

The No. 12 handicapped hole is arguably my favorite on the course. A short par-4, this hole is the definition of risk/reward. Big hitters can go along the tree line left and get close to (or even on) the green, but the tiniest pull will send balls careening off a sidehill and into the creek that flows parallel to the fairway. There is also a large protective bunker just right of the green that can be a problem for those that miss a touch right. A layup could be the smarter play, but let’s be honest, what fun is that?

A trio of par-4s round out your day at Grand Oaks. The 16th is another short par-4 with some water near the green. Find the fairway and avoid the pond, and you will be in the clear on this number 14 handicapped hole.

The final par-5 of the day is the easiest hole on the course. Playing as the 18 handicap, this 492- yarder will play downwind most of the time and makes it a bomber’s delight. Finding the fairway is key, do it, and most players will be hitting a mid-iron into the green. It’s one final chance to take a stroke off your score.

The final hole of your round will be one that you will need to be mindful of. Although it is hard to see from the tee, there is water basically all down the right side. There is also a creek that runs down the left guarded by some trees, so a big miss either way on this hole can mean disaster. A smart play would be a hybrid or a three-metal for control. Finding the fairway is key Those who pull it off will have nothing more than a short-iron or wedge into the green, which slopes from back to front. It’s a great finishing hole and one that can see some money exchange hands if you’re one to press when you’re down a few bucks.

The amenities at Grand Oaks are appropriate for their price point and their new public status. The new clubhouse is much smaller, but also much more practical for the now-public venue. The smaller digs include check-in for rounds and a small seating area with a bar and some grub. Although they don’t feature a grill, they can get you hooked up with breakfast snacks, hot dogs or a selection of pre-made sandwiches. There are glassed garage doors around some of the perimeter of the building, which can be raised for those nice weather afternoons. There are also plenty of TVs if you want to hang around after you finish up and watch a game of your choosing. Although some would call this downsizing, it is definitely an upgrade, as well as a cool place to hang out after your round. 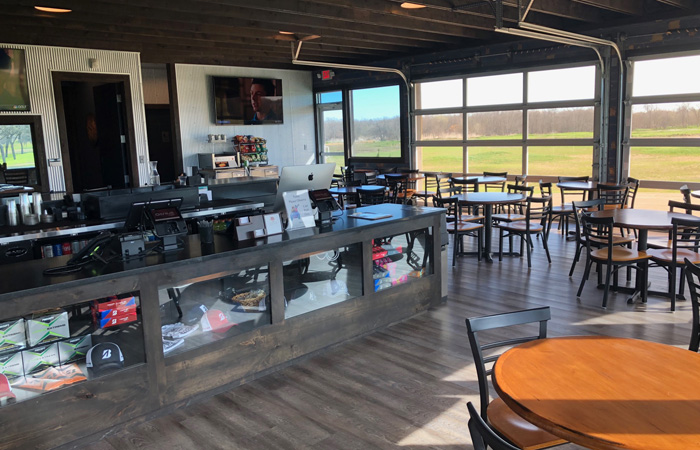 Overall, Grand Oaks is a solid municipal track that still carries the bones of a country club. The recent additions and updating make it a player again in the world of local municipal courses. It’s fun, challenging, and with a renewed exuberance from the staff to continue to improve the property, it will only get better.