A professional golfer these days can improve his or her game not just through improving the swing, but also through much simpler means such as their equipment – both clubs and balls. One less-frequently considered aspect of what can help improve performance is the caddie’s inputs.

A caddie is not merely a person who carries a golfer’s bag. Even though that task alone is pretty arduous when caddying for a Tour professional, whose bag can weigh about 45 pounds, as it includes clubs, rain gear, golf balls, food, drinks, an umbrella and various other items. A Tour caddie will also offer information on the type of shot the golfer should hit, based on knowing the yardage to the green, keep clubs dry when it’s raining, and assist with travel preparation. Additionally, a professional’s caddie plays an important role in helping to maintain the player’s motivation, confidence, attention, positive thinking and an appropriate mental state in order to play optimally (from “The Golfer-Caddie Partnership: An Exploratory Investigation Into the Role of the Caddie” by Lavallee et al., 2004).

Based on Lavallee’s research, the roles of a good caddie can be divided into three aspects: technical, psychological and environmental. The technical service provided includes any tangible element that will decrease workload for the player and increase his/her knowledge such as distance to green, wind, line of putt and any strategy required for a particular shot. The psychological aspects involve increasing player confidence, commitment, focus and mental state, especially at the time of making a shot. Finally, the environmental aspect involves minding the traditions of the sport as well as the rules of golf. In fact, according to Lavallee, caddies need to be part psychologist, part weather-forecaster, part cheerleader, part mind-reader and part coach. They might even act as counselors, dieticians, secretaries, crowd controllers and amateur physiologists.

A group of researchers (“A Qualitative Investigation into the Role of the Caddie in Elite-level Golf” by Pilgrim et al., 2016) who studied 17 male and female golfers and six caddies reported some interesting highlights of the role of the caddie. They report that caddies are involved in decision-making, psychological tuning and tournament preparation.

Often an important role of a caddie is to be a diplomat. One caddie who was interviewed for the Pilgrim study said, “Never tell them what club to hit … run the numbers.” Also, the caddie must use logic. When he or she does not agree with a decision but cannot allow the player who is already under pressure to feel doubt, there must a good reason for disagreeing, as well as the ability to back it up.

Caddies learn all of the roles they might be required to perform in a trial-and-error fashion, and the suggestions they make can sometimes involve difficult choices, such as during bad weather. Despite any doubts or problems of their own, caddies are expected to have an outwardly calm demeanor. And, after all that, most of the elite golfers interviewed by Pilgrim et al. reported feeling dissatisfied with the caddies they had worked with … one golfer going so far as to say, “I’ve never had a good caddie!”

So, who are these supermen and superwomen who lug around heavy bags on their shoulders, often at the risk of injury; offering sound advice; behave impeccably over 18 holes of golf; and then often get shouted at and treated with disrespect? What is it that attracts them to the job and keeps them in it for many decades? Moreover, it is amazing that these unsung heroes are no longer the traditional seeking-out-the-best-bar-each-evening, pot-bellied individuals, but often have keen minds, hang out together to learn from one another, and even exercise and eat well to stay in good shape.

Meet Michael Bestor, who has been a caddie for 22 years and currently caddies for Kevin Streelman, having previously caddied for a slew of other famous golfers across the globe. Four professional wins and participation in many Majors are associated with Bestor, as are famous male and female golfers, including Paula Creamer, Charlie Wi (who was a college buddy), Steve Elkington, Dean Wilson, Y.E.Yang, K.J.Choi, Mike Weir, Bud Cauley, and most recently, until his semi-retirement, Geoff Ogilvy. 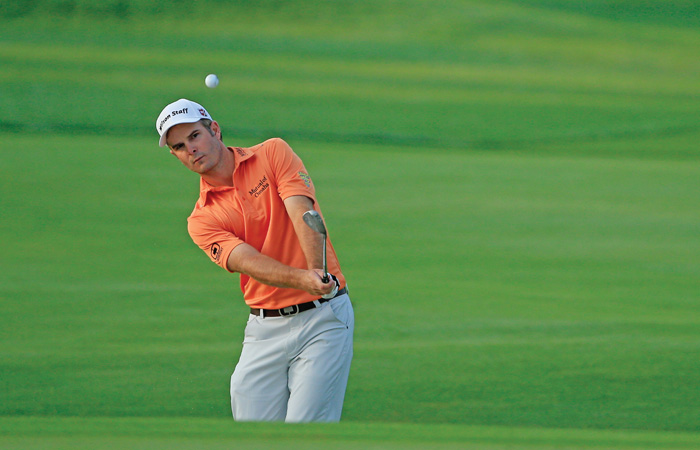 It all began when, after having played college golf, he heard of a golfer who was in need of a caddie with an understanding of golf and who was available at the last minute. It continued because he loved being around people with a passion and being part of a team, and also enjoyed the fun times, the many stories to be exchanged and the variety of situations. “I guess I have a gambling mentality,” he says, because every week is different and there is a new chance to be with a winner. Bestor feels his main advantage is that he has good knowledge of the golf swing, is able to be a“second eye” for the player and give them good information when necessary.

Bestor learned something very important from experience, something that sports coaching theorists consider vital for good tactical training. He learned to ask questions. He once had a player who was very good during practice but often got frustrated for several holes during play. He discovered that keeping the player engaged with the decision-making process was a very effective way of switching focus from the past to the present. The player was completely taken aback the first time Bestor asked him, “what’s your target; where’s the wind; what club should you use,” but then was immediately able to snap into new and more useful thoughts. Basically, the role of the caddie should be to distract the player, ask questions and offer comforting or amusing thoughts. It is also to keep calm and make smart, logical decisions and then, finally, use positive framing for any swing ideas if those are required. Little wonder then, that Michael Bestor has had a good run for over two decades.

Also meet Kenny Harms. He has been a caddie for over 31 years, having caddied for several famous Tour players and Hall-of-Famers, including Hubert Green, Hale Irwin (eight years), Raymond Floyd, Lee Trevino and Gary Player. He has also caddied for LPGA Tour players Michelle Wie, Jan Stephenson and Emilee Klein. In fact, he has been on the bag while his players have won on the PGA, the PGA Champions and the LPGA Tours. Finally, a young Kevin Na made Harms an offer he could not refuse, and they have been together for almost 13 years, becoming, in the process, close friends as well as partners in the business of conquering golf. 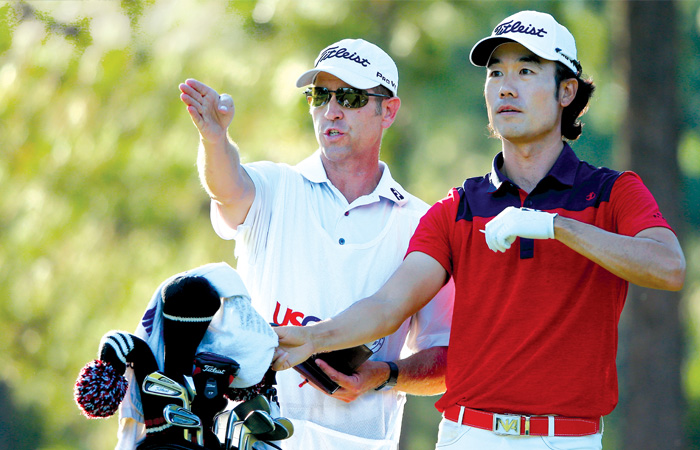 Harms believes the art of caddying involves being a psychologist. Luckily for him, he had taken many psychology classes toward his degree in sports management with a specialization in physical education and business management. After a random opportunity to caddie for a golfer, Harms realized he loved it and his father suggested, “why not try it for a year and go see the world.” That was the beginning of a lifetime goal of striving to become the best caddie in the world.

He has learned a lot from every player he has worked for, whether the player wanted his advice on most things or on very few. And that is what has helped him build the successful relationship he has had with Kevin Na. He has complete confidence in himself and his suggestions and is able to imbue confidence in whoever he caddies for, too. He believes he is not only the psychologist on the team, but also an excellent green reader. How did he become good at reading greens? “I just see the terrain, see the ball rolling on the line and the breaks in the green … it’s not something I’ve worked on,” Harms says.

He is also the statistician on the team, going meticulously over each round played and discussing where mistakes might have taken place. For instance, he says, if there is not even a 60-70 percent chance of pulling something off, why go for it, especially if the player has a good short game. He believes that the best is still to come for the team of Na-Harms, as they now have enlisted an excellent physio-trainer who can help reduce the back and neck pain that Na has suffered from for many years.

After learning so much about the caddie’s role from research findings, and having had this corroborated by two of the world’s leading caddies, how can one’s respect for these highly educated, motivated and dedicated people and their profession help but go anywhere but up.