Iron Horse Golf Course in North Richland Hills has long been a go-to for locals and those in the mid-Metroplex. Last year, the city decided it was time to upgrade the 32-year-old Jeff Brauer design.

The city once again contacted Brauer to handle the re-do, who spoke before the media outing last month and said he was definitely proud to help give his original design a facelift.

“When I first got the job to redesign Iron Horse I went on the internet to see what golfers said about the course” Brauer said. “They were consistent in their reviews. Almost all of them said it doesn’t drain well and it’s too narrow.”

It would make sense that the course doesn’t particularly drain well, seeing as it, like many municipal courses, was built in a flood plain. Municipal courses are often built in flood plains, as the vast, cheap real estate makes sense for a golf course. But courses also need to keep up with the times, and drainage and irrigation technology has vastly improved over the last three decades since Iron Horse first opened for play.

In response to the feedback from players, Brauer had a few goals with the update.

“We did a lot of things golfers may not recognize when they play the course for the first time. We put in about five miles of drainage and we took out a lot of trees. The irrigation didn’t cover 75% of the course because it was falling apart.” Brauer said. “Now your shoes are not going to be wet when you walk out here.”

Most of the original layout remains intact (more on that in a moment), but Brauer did make some subtle changes, including some routing work to the back nine and some bunker updates. All sand features have been retrofitted with the Better Billy Bunker System, which promotes drainage and eliminates those unsightly bunker liners that can appear with erosion over time.

“We didn’t do a lot to the course except change holes 13 and 14 which was a hazard because they were too close together, we took out a lot of traps and reduced the size of others.” Brauer said. 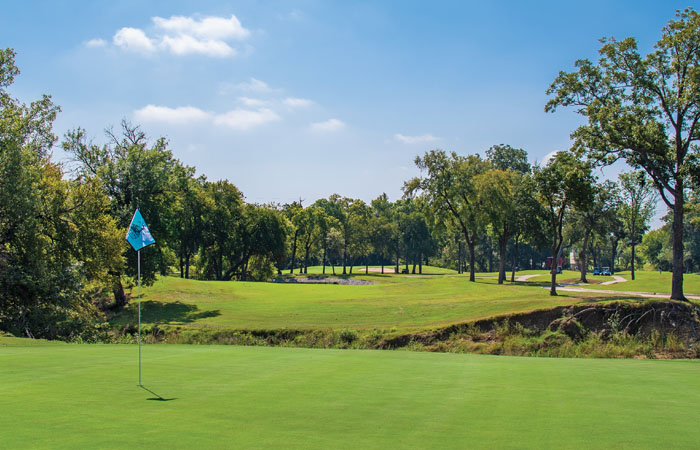 The course itself has always been top of the food chain in its architecture. A rock-solid combination of target golf, with a great blend of cut and draw holes, tee shots that test the best ball strikers and some fun, risk vs. reward challenges.

The opening six holes were open for play a few months back as players navigated the first six three times to complete an 18-hole loop. The opening hole is a 420-yard par-four, with a couple target bunkers in the fairway. Those that play a cut can carve a tee shot off the left bunker, those who favor the draw can aim at the one on the right. Find the fairway, and a short iron or wedge remains for a great chance at an opening tweeter.

For my money, the tee shot at No. 2 is one of the most demanding on the property. Players who prefer a fade are at an advantage here, as this one is a sharp dogleg right. Get your shot by the group of trees on the right and another scoring opportunity awaits. But end up too far left and you could be stymied among the lumber. The longtime resident we played with referred the prominent tree on the right side as the most hated tree on the property. A left miss off the tee will careen over a hill and could potentially scramble down to the water. Needless to say, finding the fairway is paramount at the second.

The only par-5 on the front nine at Iron Horse comes at the 4th hole. To score on this par-70 layout, players need to attack the five-pars, but this one can be tricky. It is definitely a delight for those who love to draw the ball and slinging a long hook around the trees will get some extra roll and present the opportunity to get home in two. Those who play a cut tee shot will need to hit one over the trees to carry the corner, but this is much easier said than done.

The first of the three-pars on the outward nine is the 5th hole. This is a straightforward shot of about 160-yards, but the wind here can play tricks as if it plays out of the predominate south, it will whip across from the back right of the tee and could lead to some shots that sail long and left of the putting surface. The routing here is genius from Brauer, as the hole seems easy, but the slight elevation coupled with the breeze can make for a tough club selection. 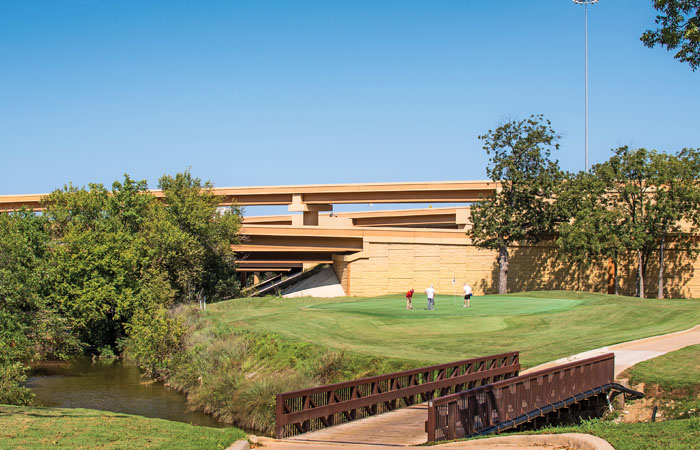 After another par-4 at the 6th, you arrive at one of the most interesting holes at Iron Horse. The short par-4 7th is, despite only being 335-yards, requires full attention. A narrow landing area off the tee means a precise long iron is the play here (except for the real gorillas that can somehow clear the creek and go for the green). A four or five iron in the fairway will leave nothing more than a wedge, but miss left and you have found trees, and right could find the creek. Even missing in the right rough could be huge trouble, as it can be difficult to judge how the ball will react out of the thick grass, leaving many players coming up short in the water. For just north of 300 yards, it’s a demanding little design.

Another difficult par-3 awaits at No. 8, as water short left is there to devour balls and could lead to double-bogey or worse. Again, the wind is a factor here, so be mindful of which direction it is playing.

The final hole on the outward nine is another design that favors those who can play a draw. Finding the short-grass on this 410-yard par-4 will leave players with a short iron into an elevated green.

The back nine at Iron Horse saw the majority of the renovation and is definitely an improvement over its old self. Running parallel to the short par-4 7th is the par-4 10th. This again plays as a short par-four and is very similar to its adjacent sister hole. Again, the play is going to be a long-iron or hybrid off the tee, which will leave a short iron or wedge into the green. The green here, however, is the great equalizer. If the pin is front right or back left, expect a sidewinding putt that can be very difficult to judge both speed and line. 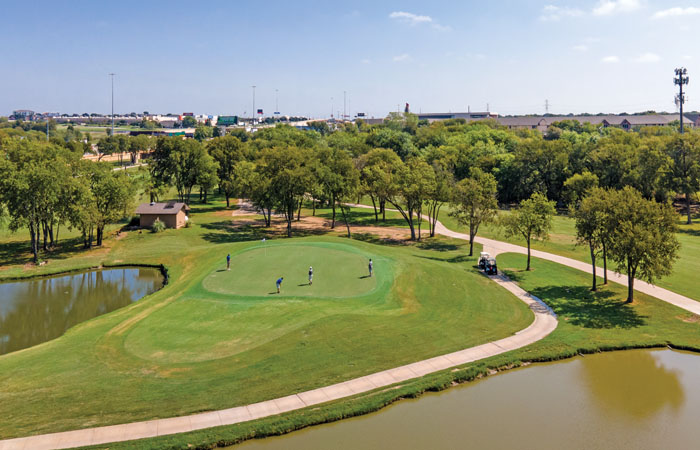 The final par-5 on this layout is at No. 11. This hole can be gettable with a solid tee shot. But the second (or third if you choose to lay-up) is the shot to remain focused. An elevated putting surface with a creek in front means missing short is a definite no-no. And plan to add an extra club on the approach.

As you make your way under the bridge to the par-4 12th, players get to the real meat and potatoes of the golf course. The demanding 12th plays at about 410-yards from the tips and requires a solid left to right tee shot. A fairway bunker on the left is a good aiming point for those who favor a left to right ball flight. A downhill approach will follow and a good chance for birdie.

One of the major changes to the routing occurred at No. 13. A bunker was removed from the left side of the fairway and the green was moved about 40 yards back and to the left. This makes the framing and sightlines of the hole a little more dynamic and opens the fairway up a bit more. Another slight cut tee shot is the play, but those that favor a right to left ball flight won’t have any issues either.

The long par-3 14th plays back uphill to an expansive green but will usually play directly downwind as it runs south to north. With a little breeze behind, the shot should play the number, but with light or north wind, plan to add an extra club to prevent coming up short.

No. 15 also got a facelift, with new turf and some additional irrigation and drainage. The hole plays pretty straightforward with a creek that crosses the fairway that could pose a threat to longer hitters off the tee. A fairway hit should leave a short iron into the green.

The final three holes at Iron Horse will test even the best players. No. 16 is a dogleg left that features a large water feature on the right. Big drivers of the golf ball can cut over the corner trees and leave a potential short iron. But miss even a little right, and the tee shot could run through the fairway to a watery grave. An iron or hybrid off the tee is a smart play, but this will leave a much longer approach. 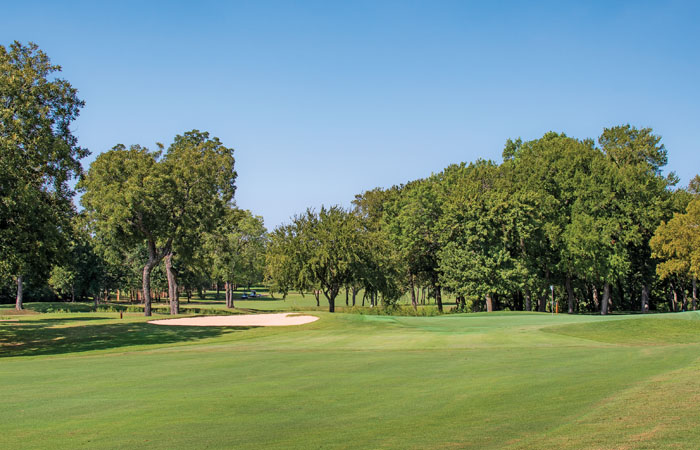 I absolutely love the par-3 17th, which is the final par-3 on this layout. It plays right around 200 yards from the tips and again fights a bit of a crosswind. Water guards the green short, but even those hit a little heavy should be enough to carry it. The green slopes from right to left, and some flowing earth bunkers will catch anything right of the green. It’s a picturesque hole and one of my favorites out there.

The final test at Iron Horse is a tough par 4. An elevated tee shot gives players full survey of the land in front of them and really frames the slight dogleg right. Some tree removal and pruning has opened up the landing area, but it is still a tough nut to crack. A creek that crosses at about 245 yards can make this a tough carry for the non-bomber. The long hitters can aim at the left greenside bunker as a target and feather a cut off of it to the middle of the fairway. From there, a solid iron leaves a final chance at a birdie.

The clubhouse and landscaping around it also got an upgrade and provides everything a player would need pre or post-round. And for my money, Iron Horse boasts one of the most unique logos in the area, so definitely consider picking up a cap or shirt with the distinct locomotive.

Another great addition to the course is the “legends of golf” mural on the large wall between No. 6 and No. 7. The mural, which features Annika Sorenstam, Byron Nelson, Kathy Whitworth, Jack Nicklaus, Tiger Woods and Arnold Palmer, is a great photo op as you make your way under the 820 bridge.

And don’t forget to stop for group photos near one of the three cabooses scattered across the property. One sits near the pavilion next to the clubhouse, another is near the 9th green and 7th tee, and the final one is next to the 15th green. They definitely reinforce the courses railroad-centric branding.

The update at Iron Horse was much needed and it has now worked its way back into the conversation for best course for the value in the Metroplex. If it has been a while since you made the trip to North Richland Hills, be sure to add this one back on your must-play list. You’ll love the changes.

“I’ve got two granddaughters who are into golf now and I talked to my wife about bringing them out here for sure. I want to be a good experience for them and everybody.” Brauer said.

A good experience for everybody. We agree.