Since its ribbon cutting in 2001, Cowboys Golf Club has been one of the finest public golf experiences in D/FW. In fact, AVIDGOLFER has named Cowboys as the Best Public Course every year since it opened. I used the word “experience” because at Cowboys it’s not just all about golf. Yes, the course is fantastic, and the conditions are always world class, but at Cowboys there is much more to enjoy that just hitting it, finding it and hitting it again.

The first thing you will notice about the facility as you arrive is the large clubhouse. Attendants are waiting to take your bags to the cart staging area as you make your way through the large double doors inside. Once there, you will be greeted by a Cowboys fans’ dream. Immediately to your left, encased in glass, you will see a large photo of legendary head coach Tom Landry and right in front of it, one of Landry’s signature fedoras. A great piece of memorabilia, and one that most people rarely get to see up close and personal. As you make your way into the pro-shop to the right, you pass by a wall that features five replica Lombardi trophies, one representing each of the Cowboys world championships. In addition, there are replica Super Bowl rings from the 90’s Cowboys dynasty. Another cool thing to check out as you prepare for your round. 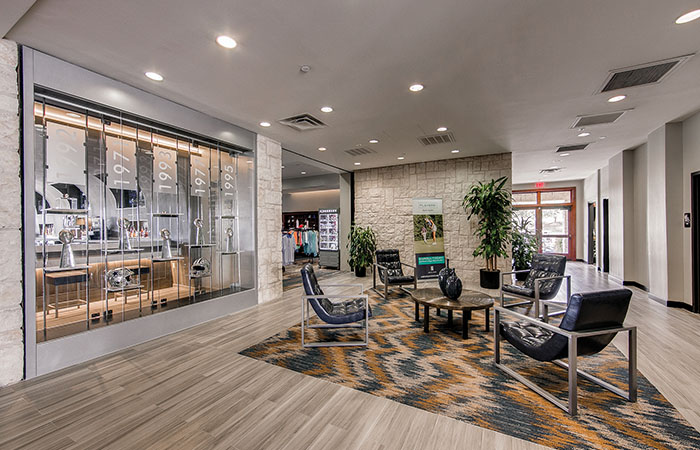 The pro shop features plenty of Cowboys-centric swag, from logo balls and pin-flags, to shirts and caps. Just about every out-of-towner has a bag full of logoed gear on their way out.

One of the great things about Cowboys is their all-inclusive greens fee. Yes, the price point is greater than any public course in the area, but with that you get your round of golf and a magnetic pin. The pin, which you can affix to your collar, lets everyone know you have carte blanche to food and beverage before, during and after your round (of course alcohol is not included). So, if you’re playing Cowboys, get there early and have a quick bite before you warm up, then while you’re on the course stop at the courtesy shack between holes No. 7 and No. 8 to fuel up (might I recommend the jalapeno cheddar sausage on a flour tortilla) and then when your round is complete, drop back in the restaurant for a quick bite on your way out. The service is spectacular, with a gorgeous wait staff, and the walls are lined with murals of Cowboy players. Out back is a relaxing patio with a small waterfall nearby to pass the time as you prepare for or finish up your day on the course. A fireplace keeps the patio warm in winter and a large flat screen usually carries whatever game might be on. In fact, during the football season, Cowboys GC often has watching parties where they feature signature drinks and a “we do it better” menu. For example, if Dallas is playing Philadelphia, the grill will have a signature cheesesteak for that day. You get the idea.

The restaurant, named the Ring of Honor Kitchen and Bar, isn’t your typical golf course fare. The food is unique and tasty. Even if you’re not playing golf, some of the dishes are worth popping in just for lunch or dinner. They feature Smoked Wings, Brisket Nachos or even Tuna Poke on the appetizer menu. For lunch or dinner check out their Smoked Brisket Sandwich, Knife and Fork Gyro or the Cowboy Crush Burger. If you’re looking for something lighter, try the Santa Fe Shrimp or Asian Chicken salads. All of the fantastic food just adds to a great day.

As far as the course goes, you won’t find a much better layout in D/FW. There are some dazzling elevation changes, some great routing and the greens are always some of the best around. Nick Carlson, who took over as Assistant GM after a move from a club in Seattle a few years ago, told me during our recent visit that the mission for Cowboys GC this year is to have the greens better than they’ve ever been – with additional love via Verticutting and other measures to make sure they are as locked in as ever. Hard to imagine they could improve much, but that’s the goal for the upcoming months.

Some upgrades were completed over the last few months, including a new retaining wall next to the No. 2 fairway that should help with erosion, as well as some trimming of trees throughout the property opening up some of the holes that had become a little tighter over the years with continued growth. In addition, the pruning of trees has helped frame the holes as they were originally intended when the course debuted back in 2001 and will help some of the tee boxes and other areas that had become too shaded making it difficult for grass to thrive.

The course begins and ends with a par-5, which can be a great way to start or finish the round. The first, in particular, usually plays downwind, although the tee shot is a bit uphill. Get something out there toward the peak of that slope and longer players can be hitting 7- or 8-iron into the green. A large bunker guards the front of the putting surface, so make sure you take enough club. The green has a pretty severe back-to-front slope, so putting back down the hill can be a tricky two-putt. Regardless, it is a birdie hole right out of the gate. The 18th is a bit tougher, because it’s usually back into the south wind, but it is a gorgeous par-5 with great bunkering covering basically the entire length of the hole. Getting home in two here is reserved for only the longest hitters, but if you happen to play on a day with the wind out the north, it can be doable for the shorter players as well. 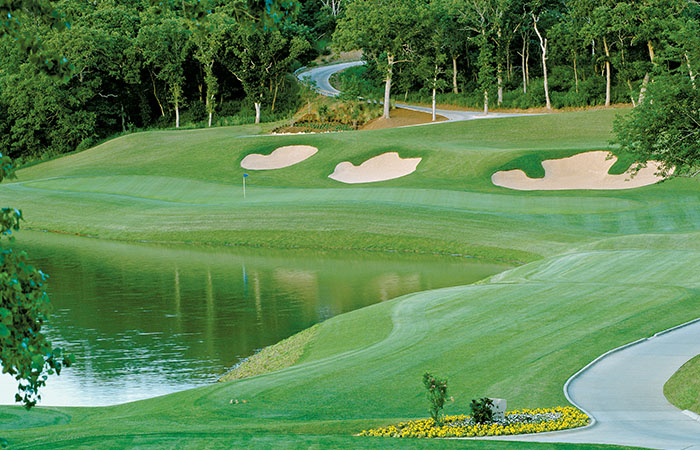 I will say, if I have one bone to pick with Cowboys, it is the other two par-5’s on the course. No. 8 has always been my archnemesis; it’s a crooked tee shot that requires a long trap draw, or, you can try to hit a driver over the trees – a method I have entertained a dozen times and always find myself stymied in the left trees. Don’t cut enough of the corner, and your tee shot will find a pond on the far side of the fairway. I really should hit a three-metal or hybrid off the tee, but then it’s definitely a three-shot hole and I just don’t like to play that way. The other par-5, No. 13, is a beast. A tight tee shot that leaves an awkward lay-up number and green that is guarded by just about every bit of trouble you can fathom. It’s just a difficult design.

The par-3’s at Cowboys are all fun and playable. The third hole, which you could make a case for being one of the best par-3’s in the area, can play at a multitude of distances depending on where the pin is located. The card reads about 175 from the tips to the middle of the green, but if the pin is located back left, add about 20 yards or so on to the number. The long skinny green works the terrain from short-right to back-left and it is all carry over water. Miss long of the putting surface and you’re looking at a treacherous shot from an awkward lie with water on the other side. Par is a great score here. 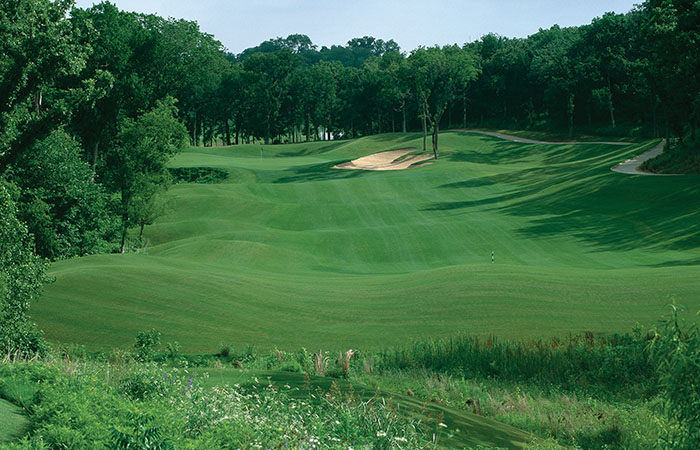 The signature hole at Cowboys is the par-4 fourth hole. Not only is this hole one of the most drastic elevation change par-4’s in the area, but it also provides a great photo opportunity, as there is a giant Cowboys logo blue star painted in the middle of the fairway. Watch as your tee shot hangs in the air for a good eight count before hitting the fairway below. It’s a great golf hole and one that every local player should experience at least once.

You will find two of the most difficult par-4’s on the front nine at Cowboys, the fifth (No. 1 handicap) and the seventh (No. 3 handicap). No. 5 is a difficult driving hole as there is blind water to the left. If you’re playing from the tips, the tee shot is through a shoot and over a small tributary, which adds to the demand for accuracy. An almost blind long iron approach awaits making this hole one of the toughest on property. The seventh is a lengthy dogleg right par-4 with OB right and a smattering of small trees and underbrush left. A good tee shot still leaves plenty of meat left on the bone for the second. Hit one OB or left and you could be staring a big number in the face.

In addition to everything else, Cowboys GC handles the little things well. They cater to the die-hard golfer and football fan. The carts bear the names of current and former players, so you might find yourself in a cart with Aikman, Emmitt or Irvin’s name on the side. And be on the lookout for monuments next to the tees that detail some of the best moments in Cowboys franchise history. These are just a couple of little details that make the trip worth it. 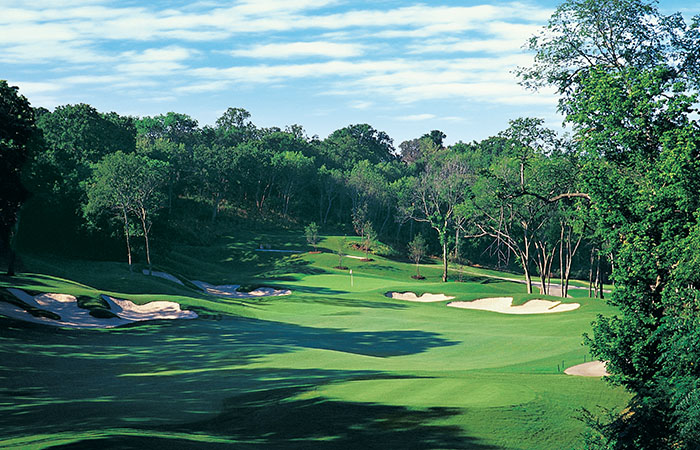 Overall, Cowboys has been at the top of the mountain of public golf in D/FW for almost two decades. It’s still one of the best courses condition-wise, layout-wise and amenity-wise that Joe Q. Public can see here in the Metroplex. Sure, it will cost a bit more than some other local public facilities, but it’s not just a round of golf. At Cowboys Golf Club, it’s a total experience.