It has been seven years since Richardson’s Sherrill Park No. 1 underwent a multimillion-dollar renovation, and the course routinely recognized by AVIDGOLFER as one of the best municipal facilities in DFW continues to put their best foot forward with two great courses, a rock-solid practice facility and a strong clubhouse with all the amenities you might need for a wonderful day playing.

Originally designed by Leon Howard, both Sherrill Park courses have become a must-play for locals and tourists alike. PGA TOUR Veteran D. A. Weibring and Design Resource, Inc. completed the redesign of Sherrill Park Course No. 1 in 1997 and Course No. 2 in 2001. Despite a series of weather curveballs over the last few years, both courses continue to shine with great conditions and playability.

As you begin your round on the No. 1 course, you are met with a manageable par 5 that plays just north of 500 yards from the back tees. A small pond guards the right side of the fairway at about 220 yards, so the longer hitters should be able to hit their tee shots past the danger. If you look to play this hole as a three-shot par 5, then be mindful that the water is there as you lay it up. A pair of deep greenside bunkers can collect approach shots from those who are bold enough to attempt to get home in two. 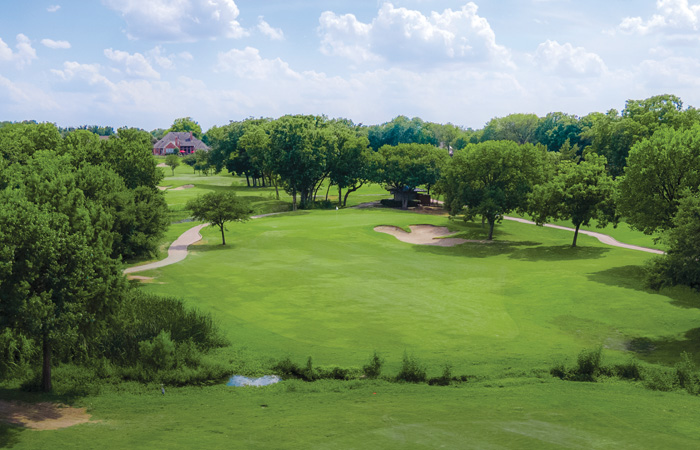 The second hole is a short but demanding par 4. Shorter hitters can safely hit driver and stay shy of a small pond short of the green, but longer players will likely need to hit a hybrid, long iron or 3-metal to stay short of the trouble. Once in the fairway, nothing more than a short iron or wedge should remain.

No. 3 is the first par 3 on this layout, and it is also the No. 18 handicap hole. Playing at 197 from the back tees, this hole does feature some water to carry, so it’s not quite as easy as the scorecard may lead you to believe.

After the short par-4 fourth hole comes the second par 5 on the front. This one is narrow off the tee and plays close to 600 yards from the tips. Water right of the green can collect any erratic attempts at reaching the putting surface in two and there is out-of-bounds left, so be careful off the tee.

A final front-nine par 3 is followed by three straight tough par 4s to round out the front nine. The toughest of that trio being the par-4 eighth hole, which rings in as the fourth-toughest hole on this layout. A narrow landing area off the tee will test even the best drivers of the golf ball. A good tee shot here will leave players with a mid-iron approach that will be somewhere in the 160–180-yard range. The green has a distinct slope back to front, so if the pin is up on the front part of the green, putting from the back of the surface can be tricky. It’s a great hole to finish up the outward nine. 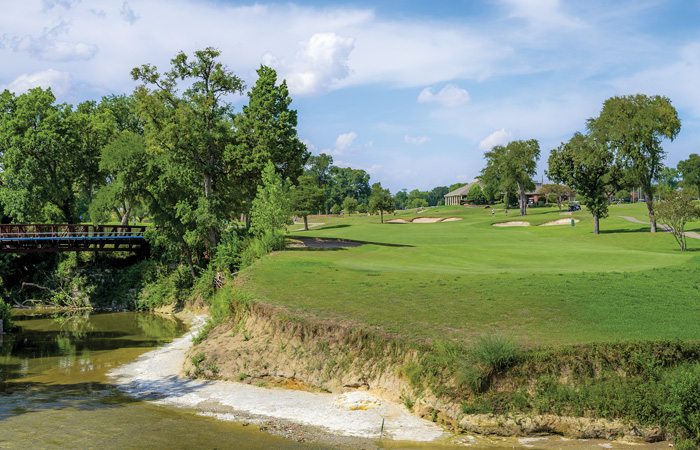 No. 10 is a demanding par 4 with a water feature on the right. Favoring the left center of the fairway is optimal here to avoid the water and leave the best angle to the slightly elevated green.

The first par 5 of the back comes at No. 11. This is a three-shot hole for just about everyone but the top of the food chain long hitters. Missing left off the tee is a death sentence, as trees will swallow balls hit in that direction, which leads to a punch-out or a re-tee. It’s a pretty straightforward hole if you can find the fairway off the tee.

The 12th hole is one of the most interesting at Sherrill Park No. 1. Although it reads on the scorecard as playing a little over 400 yards, a speed-slot in the center right portion of the fairway can send balls careening into a greenside water feature, especially when the grass is dormant and the fairways are running fast in the winter. If you choose to play an iron off the tee, you will have a mid-iron into a slightly elevated putting surface. 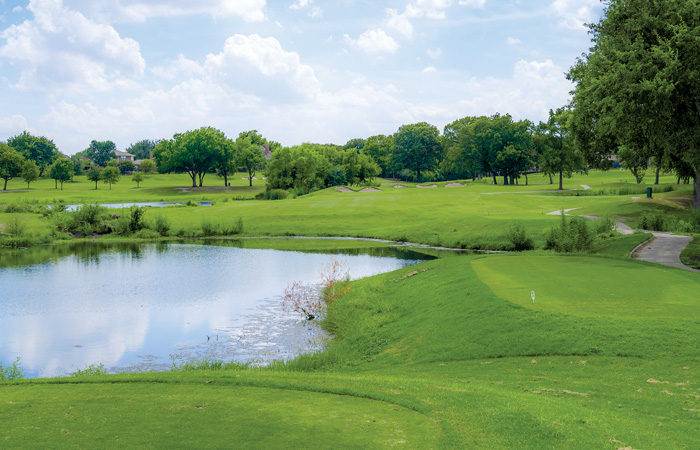 The first par 3 of the back nine comes at No. 12. While it’s not terribly demanding distance-wise, there is water short of the green, and when the grounds crew shaves the slope short of the green, balls can pick up speed and roll all the way back off the green and into the water. It’s a shot that needs your full attention.

After another long par 5, the second par 3 of the back appears, and playing at 188 yards, this one is the second longest of No. 1’s par 3s. It also plays a bit uphill, so be aware that you may need an extra half club or so.

Back-to-back-to-back par 4s round out the finish at Sherrill Park No. 1. All three holes are gettable, as none of the three play longer than 430 from the tips. Although on No. 17, be aware of the water across the fairway, as driver can chase through and end up wet. A hard-hooking right-to-left hybrid or 3-wood might be a more reasonable play.

The ultimate hole at Sherrill is a 423-yarder that usually plays with a dominant right-to-left crosswind. Favor the left side of the fairway to take the water on the right out of play. A small green protected by bunkers left and long requires a pinpoint iron shot.

As much as I enjoy this layout, the greens are really the great equalizer on No. 1 at Sherrill. They can get fast during the summer months when things are dried out a bit. We visited Sherrill just a few days after the torrential rains of mid-August, so the putting surfaces weren’t quite as fast as they have been our last few times out. 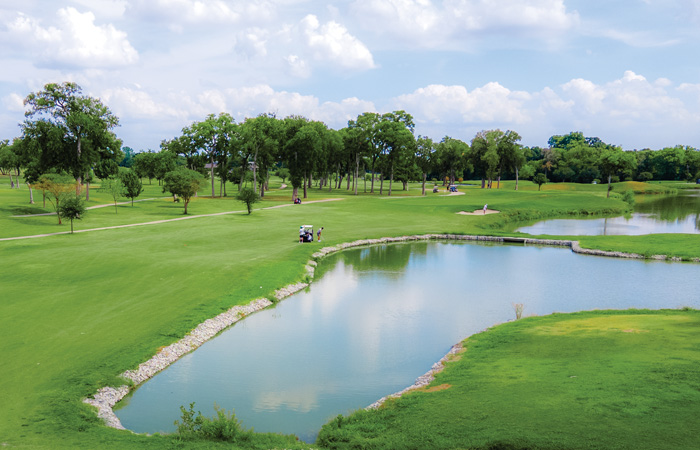 Sherrill Park No. 1 has a sister course, called appropriately, No. 2, which is the more difficult of the two and sees about 35 percent of the total play at Sherril. No. 2 is also the more affordable option, so it can be a nice retreat if you’re willing to tackle the tougher 18.

Some of the highlights of the No. 2 course include the opening hole, which requires a carry over a creek that runs across the fairway and a whimsical sloping green that can lead to some diabolical putts. No. 6 on the No. 2 course is another great hole that players can attack if they choose to be bold. Playing just around 300 yards, it is reachable for the longer hitters, but beware of water left of the green and a huge bunker that guards the putting surface short.

The final hole of the outward nine on No. 2 is a fun par 4 that features a large fairway bunker on the left. The green is also guarded by a large sand trap on the right, so be aware that being aggressive toward a back right pin could lead to a bunker shot if you come up short.

No 12 is a fantastic and beautiful par 3 that plays slightly uphill and has a creek that is in play short of the green. Making sure to take enough club is the key to this par 3. The right side of the green is the much safer play, as there is a cavernous bunker short that is a tough up-and-down. 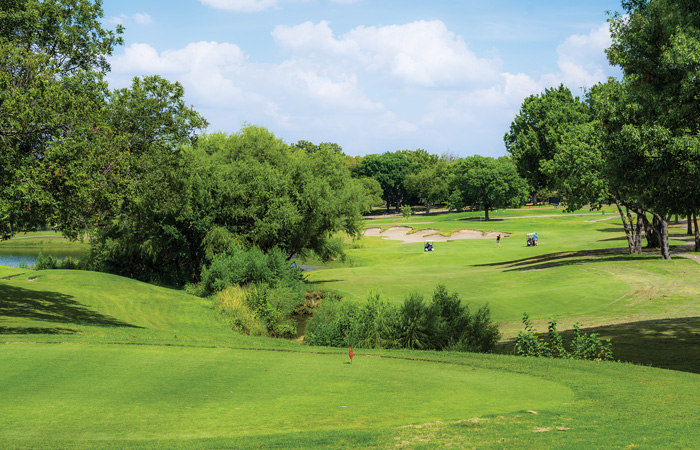 The most difficult hole on the No. 2 course is the final par 5 of the round, No. 15. This long, winding dogleg left plays uphill and has a bunker that guards the left side of the layup zone. The closely mown area short and right of the green can lead to some funky chips that can be tough to stop close to the hole. It’s a long hole, and it’s a true test for even the best players.

The final hole at Sherrill Park No. 2 is a par 4 that plays back over the same creek you saw on No. 1. Use the bunker on the right as a good target line, and the grade of the fairway will work tee shots back to the middle. There is a small tree and a bunker that guard the green short and left, so be aware of it as you formulate your approach-shot plan. It’s a great way to end your round.

The pro shop and clubhouse at Sherrill Park are fine. Not life-changing by any stretch, but they have everything you would need for a day at the course. From shirts and caps to balls and gloves, they have you covered for anything you may need last minute. The snack bar will keep you fueled up with hot dogs and whatever beverage you might want, adult or otherwise.

The practice facilities at Sherrill Park are great, as well, with a nice, wide driving range to hit balls or warm up pre-round. The chipping and putting green is huge, with a multitude of targets to get your short game dialed in.

During the easier-to-stomach spring and fall months, Sherrill Park is a great facility to loop 36, with a morning round on No. 1, followed by lunch and an afternoon tee time on No. 2. It will be a fun and fulfilling day of golf at one of the best municipal courses we see year in and year out.

Sherrill Park has it all, including some of the nicest staff members you will find anywhere. Head Professional Ronny Glanton has been at Sherrill since 1985 and was named 2020 PGA of America Golf Professional of the Year, the highest award given to a PGA member, and he is the only two-time President of the Northern Texas PGA. Glanton is a pro’s pro and takes pride in presenting his facilities to the general public. It’s easy to see why Sherrill Park is routinely ranked toward the top of our public course list.