DFW golf experienced a huge boom of new courses in the late ‘90s. Texas Star in Euless was one of those courses, and since 1997 it has been one of the premium daily fee courses in the area. Now, 25 years later, it still routinely finishes in the top 5 courses in AVIDGOLFER’s public course rankings. A world-class conference center, the Raven’s Grille and the thought-invoking layout of the golf course make this a great place for your friendly round, corporate event or wedding.

The course layout at Texas Star will get the blood pumping on several occasions, while also offering some scorable holes to keep your momentum flowing. At almost 7,000 yards from the Texas tees or 4,900 yards from the forward tees, there are plenty of options for the championship-caliber player or the novice looking for an enjoyable day on the links.

The opening hole at Texas Star is a straightforward way to begin the day. Conservative players can assure a fairway hit with a three-metal, or an aggressive driver play can lead to a shorter approach. Favor the right side of the fairway for a better angle to the green, which is guarded by a bunker on the left. It’s a manageable first hole that will help build some confidence early in the round. 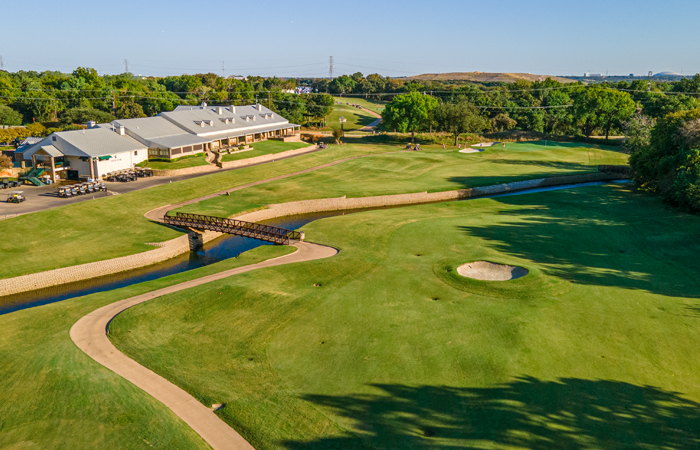 No. 2 has of the most interesting green complexes at Texas Star. A left-to-right shaped drive will set players up in prime position, but the tabletop, narrow depth putting surface will challenge club selection skills, and the predominant south wind can leave iron shots short in a trio of deep bunkers. However, miss the green long, and it will leave an equally challenging up and down. It’s a tough hole where par is a good score.

Called “High Mesa,” the short third hole plays just under 150 from the tips, but the slight uphill can require an extra club. And the wind off the right can drift shots long and left into a tough sand trap that can be difficult to play from. Two other bunkers also guard this green, one short and one long and right. The narrow green means club selection is at a premium here, so choose wisely and make a confident swing to avoid trouble.

No. 4 is where the Star begins showing off some of its elevation changes. This 454-yard par 4 rolls with the terrain downhill and is a challenge off the tee for even the experienced player. Out-of-bounds right and trees left frame the hole nicely, but miss on either side and expect a penalty stroke. Hit the middle of the fairway and some additional roll will provide a mid- or short-iron shot to this green that feeds everything toward the center. 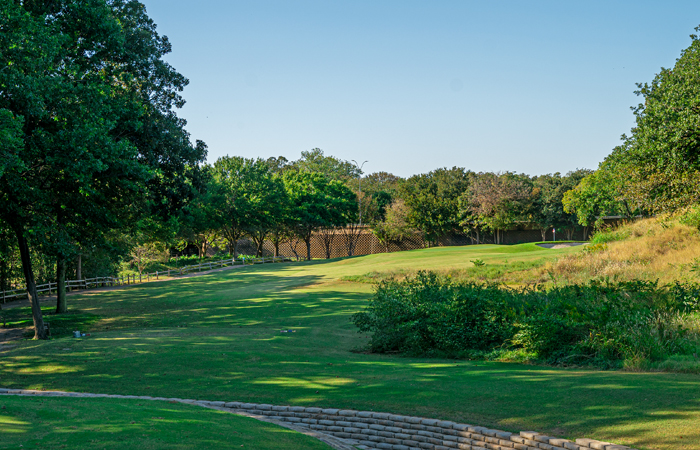 At just 389 yards, the sixth is a great risk vs. reward hole. A large bunker on the left will dissuade those who consider an iron or hybrid off the tee, but hitting driver could lead to more problems as the fairway narrows closer to the green. Deep fescue right and severe bunker-laden mounding left can swallow golf balls, so the smarter play is laying up right of the fairway bunker and playing for position.

No. 7 is the only par 5 on the outward nine of this par-71 layout. The tee shot is similar to the one players see on No. 4, as it plays downhill to the landing area. The second shot is where a decision needs to be made. A layup for position is a veteran move, but those longer players may want to take a run at the green in two. A group of trees short and right of the green make the shot slightly blind, especially to back right pin locations.

After the long par-3 eighth, No. 9 is one of the toughest holes on the entire property. This 422-yarder plays longer, as most players will need to lay up short of a crossing creek that is about 270 yards from the tee. Play to leave your tee shot well short of the creek, and you can be faced with a long approach with water on the right. There is some room to miss long left, but this leaves a tricky pitch with water on the other side. It’s a tough final hole of the opening nine.

The opening hole of the back nine is a great par 5. Called “Johnson Crossing,” the fairway is elevated significantly from the tee box, meaning players will have to hit to a bit of a blind landing area. A couple of fairway bunkers on the left prevent players from taking a very aggressive line, and thus means a longer second shot or necessary layup. The fairway winds downhill to the left toward the green, which is guarded in front by a creek. Should you elect to go for the green in two, there isn’t much landing area, and longer irons may careen off the back into one of two bunkers. It’s a challenging, thought-provoking hole that can yield some birdies if played properly.

The 11th hole at Texas Star is a whimsical design from architect Keith Foster. This two-tiered fairway gives players the option to take the high side and get close to the green or play the lower fairway and play for position. And the pin position is usually a good indicator as to which side you might choose. The hole is just 337 yards, and a cavernous bunker sits on the front right of the putting surface, so be mindful of just grabbing the driver and going for broke. The hole seems playable, but there are a lot more challenges if you don’t think your way through this one. 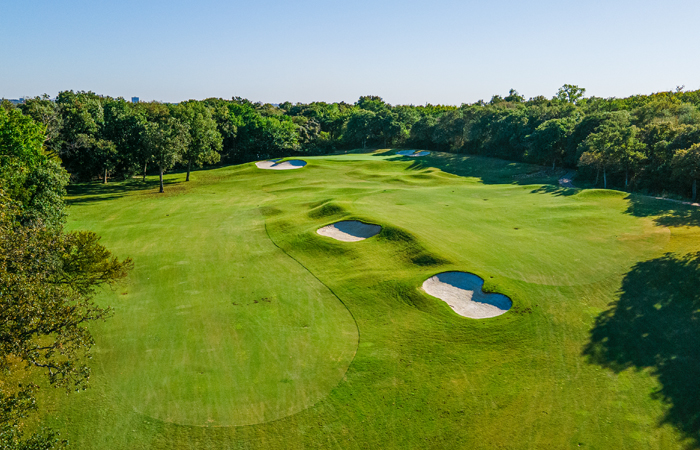 “Coyote Bluff” is one of the most interesting and fun holes in DFW. This dogleg right ascends a hill and then flaunts a dramatic downhill second shot unlike just about anything you will find in the Metroplex. A long draw with the driver can clear the hill and funnel down near the cart path, but playing this far up can leave a hanging, downhill lie that can be tough to manage. But play too far back in the fairway, and the second shot will be totally blind. Natural fescue surrounds the green, so any errant shots can disappear among the tall grass. It’s a fabulous design, and one you won’t forget playing.

No. 14 is one of the longest par 3s in DFW municipal golf. It measures 245 from the Texas tees and plays slightly uphill. This hole is a specific example of why, as amateurs, we need to be sure to select appropriate tees for our skill level. This behemoth even plays 212 from one tee in, which is still more than most amateurs can handle. There isn’t much to it design element-wise, just a couple bunkers in the front of the green. This hole is simply about brut length. A birdie here should be celebrated with beverages, a par is a fantastic score, and a bogey likely won’t cost you any strokes against the field. 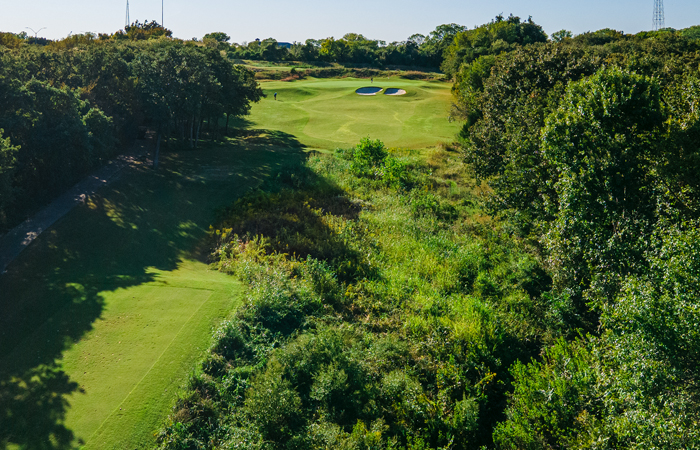 If you are a regular reader of AG, then you probably recognized No. 15 at Texas Star as the cover hole for our 2022 Best of Public issue. The hole is named “Battle Cry,” but I might call it Rubik’s Cube. Seems no matter how I choose to attack this one, I always foul it up. A sliver of fairway sits in front of the tee, inviting a seemingly simple layup followed by a short iron to the green. But this shot is more difficult than it looks due to water on the left, a small bunker in the middle and a water feature on the right. A three-metal or driver to the far fairway can also be appropriate, as this leaves a much better angle to approach the green … but take off too much of the dogleg, and your ball will be water bound. It’s another quirky hole, and one that can give you fits if you overthink it.

The final few holes at Texas Star are definitely gettable. The par-3 16th is a sweet little hole with a big bunker on the left and water over on the right. It’s usually downwind and plays a little downhill, so really consider club selection here as the tee box sitting back in a wind-free zone won’t indicate how hard it’s blowing once the ball reaches apex. The good news here is once the ball is on the green, with a right pin, everything funnels in that direction. So pick a good landing spot and there is a real possibility of a kick-in two.

The final hole Texas Star is another par 5. On the scorecard, it reads as 535 from the back tees, and a seemingly manageable 505 from one in. But this hole almost always plays into the prevailing south wind, making it play longer than the card indicates. A great target line is the bunker in the middle of the fairway, as a little left or right of it is just fine. There is water all down the left, so be careful to avoid it even though favoring the left leaves a little shorter second shot. On a day with little wind, the green can be reached in two, but on days when it’s blowing, a second shot that is short and left is a great play. This narrow front-to-back green can be tough to hold, but find it and a birdie can be written on the scorecard to end the day.

Texas Star is everything you would want in a great municipal. Between the outside staff, pro shop staff and on-course staff, there is little doubt they want your experience to be top of the food chain for your entire visit. The food is solid with plenty of options, from breakfast or lunch to a top-notch end-of-the-round dinner and cocktails. There are grumblings of a possible pro-shop renovation coming in 2023, but nothing yet concrete. There is nothing wrong with the current pro shop, mind you, but a little TLC never hurt anything.

The overall experience at Texas Star is worth the price of admission. The course is great, and conditions are always above average or superb for a daily fee track. It’s easy to see how Texas Star is one of AG’s favorites, year in and year out.