If you a longtime reader of AVIDGOLFER, then you have likely seen many of our illustrated covers. What you may not know is who is behind them and how they are created. As we embark on the 25th anniversary of the magazine, we wanted to pull back the curtain and give our readers an inside look at some of the past illustrations and the inspiration and story of the man behind them.

Benjamin Vincent, better known to his clients as BenJam’N, is a Dallas-based artist who has done everything from the caricatures we have come to love on the cover of AG, to storyboards, book and newspaper illustrations, and quick sketches for corporate functions. The son of an art teacher, Ben began his artistic endeavors over 30 years ago, as a caricature artist at Six Flags. As he refined his skills, he began to travel across the country to share his talents at fairs, drawing caricatures and portraits. 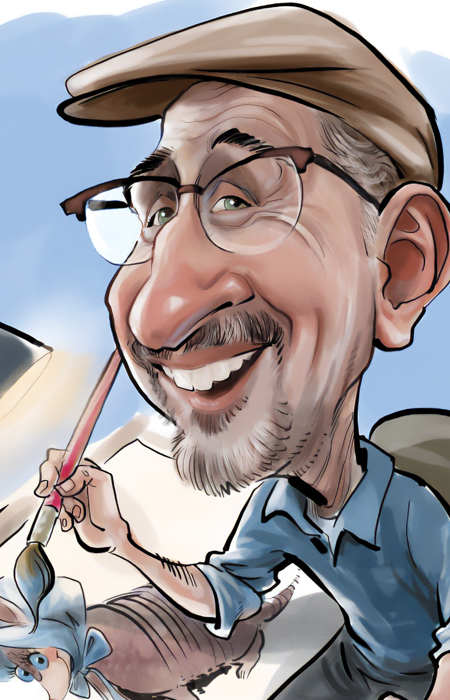 After studying art, traveling to places like Paris and even Israel, Ben got his BFA in illustration from Art Center College of Design in Pasadena, California. After returning to Dallas, he began his career working for newspapers like the Dallas Times Herald, magazines, ad agencies and corporate and private events. To say that Ben is well-versed would be an understatement.

Although most of his art is now done on computers using a variety of programs, his studio does still have a place for traditional mediums so Ben can sketch or paint in oil, acrylic or even watercolor, for those clients who may want a more classical look and feel to the piece.

Ben’s process is fairly straightforward. Having used Ben for 20 (including this one) separate covers over 25 years, as well as artwork that has accompanied many features in the magazine, we know the process well. An email is usually sent with an initial idea or concept, and then I will meet Ben at a local La Madeleine, where he arrives sketchpad in hand to work through some ideas as he sketches. It’s truly uncanny how quickly he can come up with a sketch of a subject using just a photo of the person. This amazing talent comes from years of working at Six Flags and fairs, sketching strangers in just a few minutes while they wait. It’s an amazing talent. 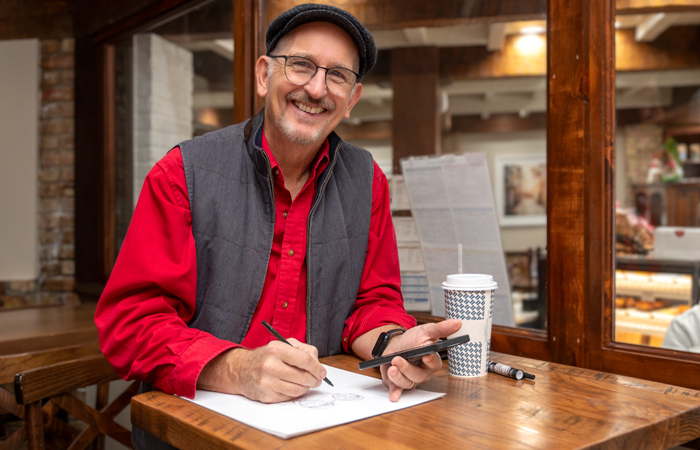 After Ben comes up with a rough sketch, he retires to his lair where he comes up with a computer rendering of the rough sketch. That is then sent via email and checked for any potential design changes or details. From there, he’s off and running on the final piece and usually within a week or so, the final artwork is sent over for publishing.

We thought as we celebrate all Ben has done for us over the years, we would give you our favorite illustrations from the mind of BenJam’N.

For more on one of the more controversial illustrations, see my Letter from the President on pg. 18, but below are some of the ones I really enjoyed.

Rick swore that the illustration was of Chuck Cooperstein. If there was any resemblance (I didn’t see it), it was coincidence. 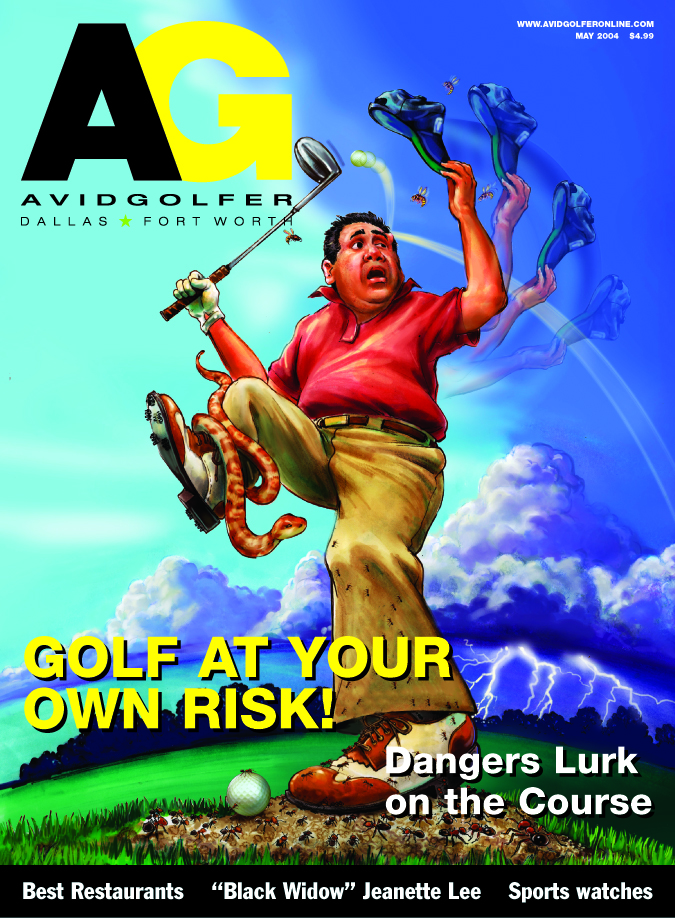 We worried that we would get in trouble with this one, but it was the biggest sports news, period, and we had to address it.

None of them were playing golf at the time (Cuban still doesn’t), but again, it was the biggest story in town, and we had to address it.

Eli is the first editor that we have who wasn’t an Aggie. As much as I didn’t want to do this story, it was inevitable. But I did think the illustration turned out great. 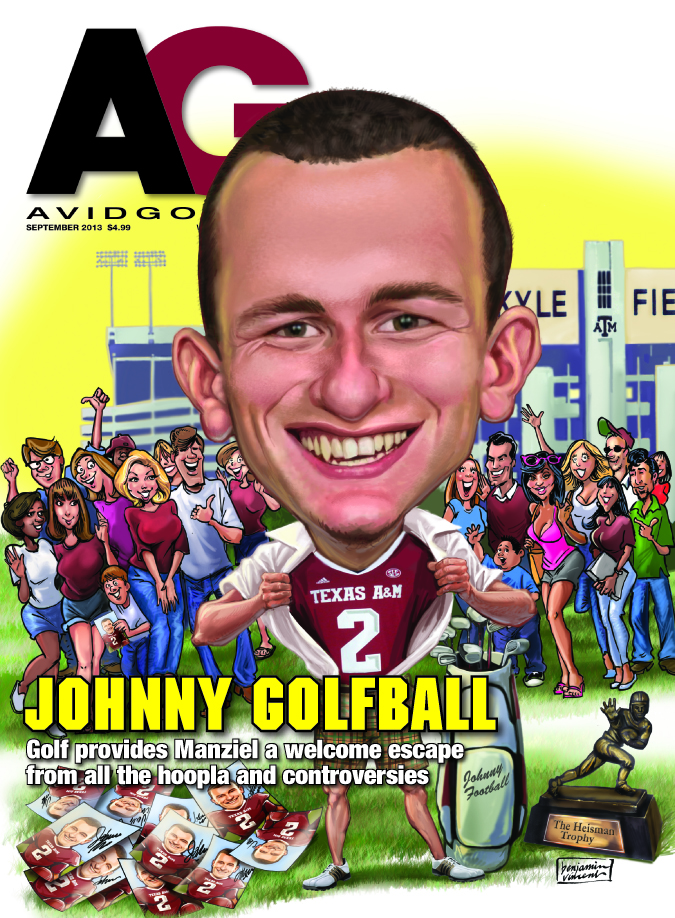 When I met with Eric Affeldt regarding the story, he had virtually shaved his head. He took as many copies as he could because we showed him with hair.

The X Files: Whatever happened to Anthony Kim? (Jan 2019)

For years, I wanted to do a story on his whereabouts, and finally got a renowned writer (Curt Sampson) to track him down. I knew we wouldn’t get a current photo, so we recruited BenJam’N to get us a caricature, and I love it.

This one is my favorite. One day, as David Winkle and Hambric Sports continue to excel and expand, I want to recreate this cover with the real people.

This one is hanging in our lobby. Lee’s smile is infectious and puts me in a good mood every time I pass it. 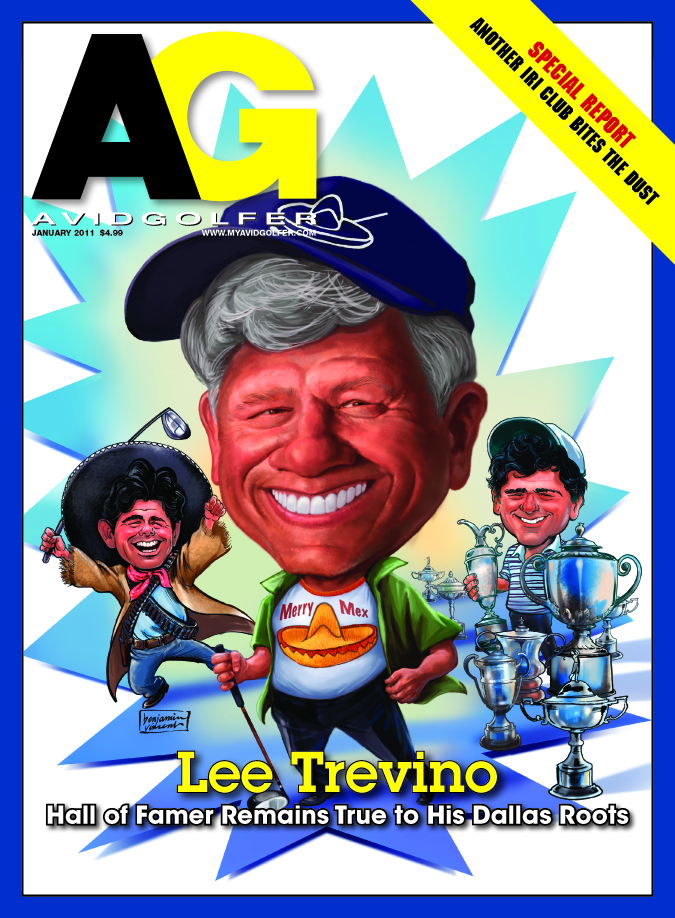 The cover effectively captured the entire sordid mess surrounding Tiger’s salacious indiscretions. We received some flak for it but, hey, the truth hurts.

The continuous onslaught of rain drowned many courses, where even an Ark wouldn’t have allowed play. I think Ben captured this one well. 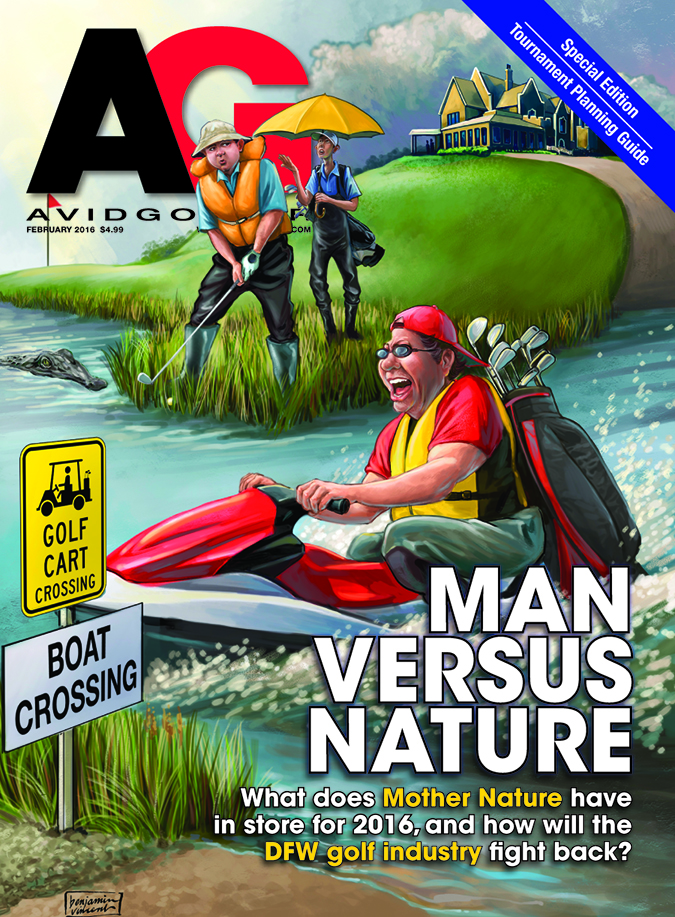 The Bond theme nicely depicted one of golf’s most successful player agents. The theme and the execution just worked.

Our first, and most controversial, illustrated cover. Greg Norman’s original design was such a mess that even he quit playing it after about 15 holes. And the story behind the cover illustration almost cost us a client. We can laugh about it now, though.

I didn’t start at AG until about seven years ago, so I have only been around for a handful of these covers. But I have seen all of the other ones in the archives. In my opinion, I would be surprised if anyone didn’t laugh at the Tiger’s Tarnishing Tales illustration. His chipped tooth, the cell phone in hand, the ladies in the background with an unhappy Elin watching in disgust with a bent golf club. The whole thing is just perfect beyond words, right down to the last detail. And although it could be seen as a bit insensitive, given what Tiger and his family went through back then, looking back on it, I still think it’s just fantastic.

I think my second favorite is one that I was a part of. It comes from 2018, when we did a cover story on the toughest courses in America and the USGA rating system. It featured a golfer on the cover who was clearly beaten up, with a black eye, crooked cap, ripped shirt and bandage on his nose. I just love the way this one turned out. It was exactly what I had envisioned in my head when I met with Ben to discuss it. I even love the buzzard perched up at the top right. 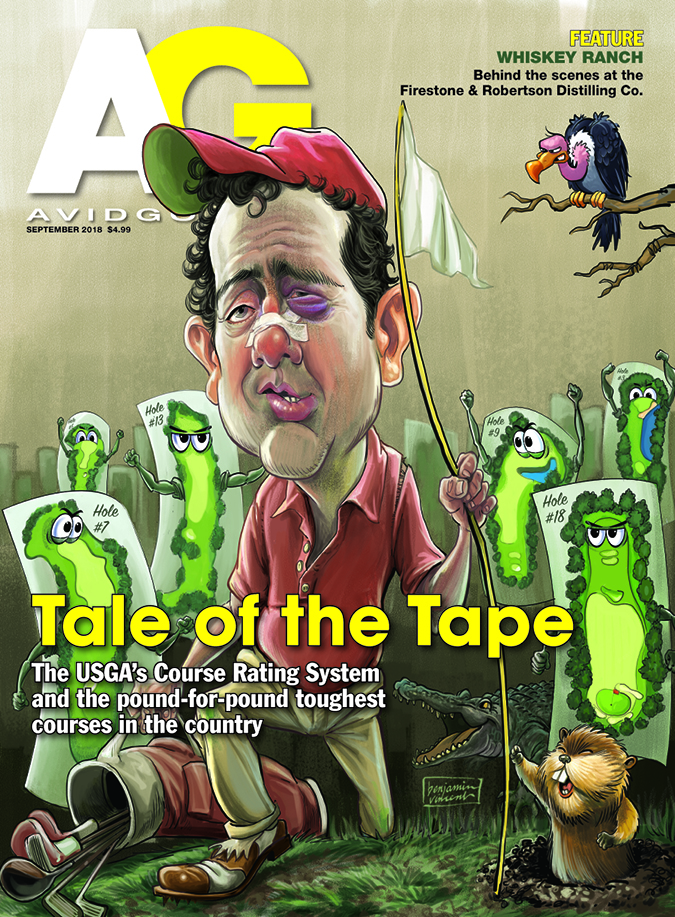 I also really like this one. It has caricatures of Ben Hogan and Byron Nelson. Not only are they extremely well done, right down to Hogan’s plaid Colonial CC jacket, but I often wonder what either would have said had they seen this cover. Both had long passed before it hit shelves, but I have a suspicion one would’ve really enjoyed their likeness and one wouldn’t have been such a fan. I think you can decide for yourself which one is which. 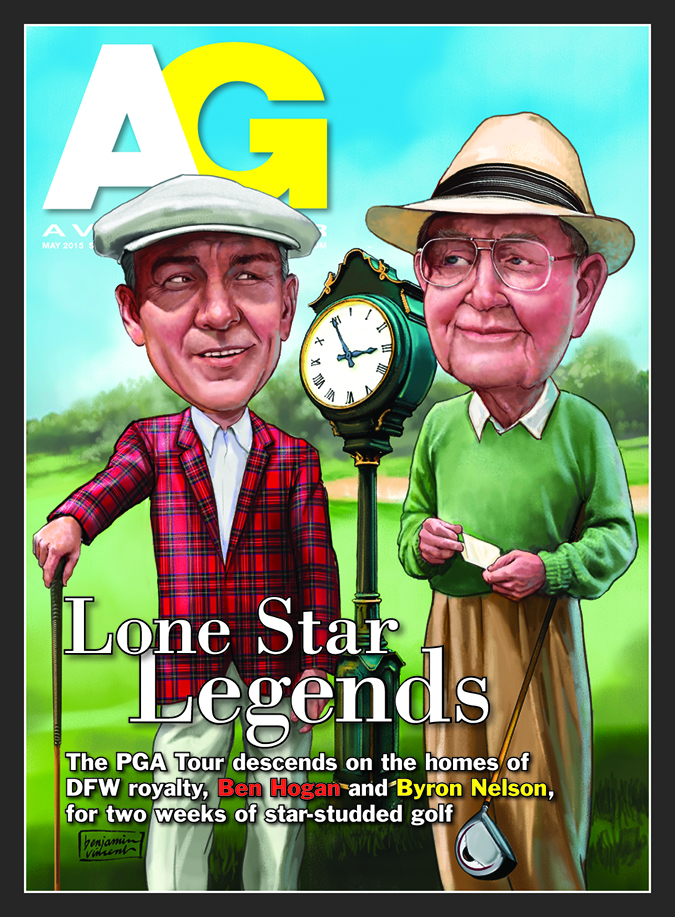 I was fortunate to work with Benjamin on seven AG covers, and on every occasion “BenJam’N” absolutely nailed it. Even the most intricate … and controversial … concepts didn’t faze him. We would provide him a general idea of what we wanted, and then he would create something memorable. Thank you, Benjamin, for being such a solid contributor to AVIDGOLFER’s success!

OK, so maybe I’ve got my Aggie maroon glasses on. We got the opportunity to hang out with Johnny Manziel on the golf course, but due to his off-the-field antics during the Manning Camp the night prior, he wore sunglasses throughout the round. Shades don’t make for great cover photos, so in stepped BenJam’N at the last minute and he was able to create an amazing cover that highlighted JFF’s career at Texas A&M.

The cover that I applaud and appreciate Benjamin the most. Most of his covers centered on one or two subjects; for this one, we asked him to create – in full detail – seven local Tour pros. I bet you can still name all seven of them.

TI have these tied. Two of AG’s most controversial covers, and for different reasons. The Beechwood cover had some features from other local courses, which didn’t sit well with those GMs/head pros. The Tiger cover caused quite a stink between us and some of Tiger’s most loyal fans. 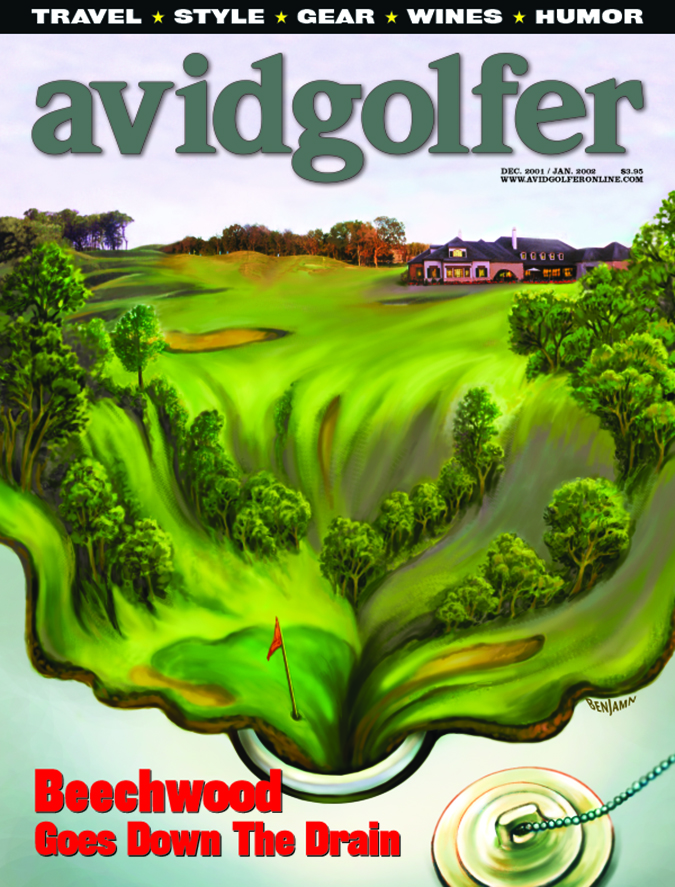 I always had a blast working with Ben, and for me the most fun covers were the ones that, when we first sat down together, I had only a vague idea of what I wanted, and he would pull the random phrases and ideas together into an amazing – and often hilarious – drawing.

My two favorite covers are the Man vs Nature and Sports Agent Man covers. Both were perfect examples of only the most elementary of concepts that he crafted into a perfect image. The Man vs Nature cover sticks out specifically – the only phrase I had in my mind when we sat down was “crazy guy on a jet ski fights a thunderstorm,” which is an utterly ridiculous idea. But in about 90 seconds, he sketched out the framework of what became the cover. It still makes me chuckle to look at that cover and think back to how he pulled something out of nothing.

Clearly, Benjamin Vincent has been a huge part of what has made AVIDGOLFER so special over the last 25 years. Through multiple editors and now 20 covers, he’s always been easy to work around, with a streamlined process, great talent and attention to detail. If you have ever picked up one of our issues with an illustrated cover, then you owe Ben a little kudos, as well.

You can see more of Ben’s work at www.benvincent.com or on Instagram @benjamin.vincent