It’s hard to believe that in the land of triple-figure golf courses and lots of triple-figure heat this time of year, that there might be a course so good it would be worth wearing out your travel GPS to find a desert hidden gem.

In fact, it would be a grave golfing error to not play one of the true hidden gems of the Phoenix-area — AK-Chin Southern Dunes in the small community of Maricopa.

While far from the golfing glamor of Scottsdale and the many famed courses there (which made this jewel of the desert so attractive to start with), the outstanding par-72 Southern Dunes layout designed by former Masters champion Fred Couples and the firm of Schmidt-Curley has plenty to like and explore again and again.

For a course built in the wrong part of the region as some local residents like to say, it does so many things right. For example, it’s one of the few championship courses in the area that features core golf, meaning it offers very few distractions from roads or homes along the course. It’s simply public golf for great golf’s sake.

Combine the inviting and peaceful land sculpture and views of the nearby Estrella and South mountains and you have a visual treat to the layout, which can play 7,546 yards from the back tees to challenge the biggest hitters, or considerably shorter.

If you’re looking for dramatic boulders hanging over the edge of the perfectly green fairways and massive resorts nearby, you’re in the wrong part of the desert region. However, dramatic bunkers, pure greens and interesting shot values are all here in abundance. 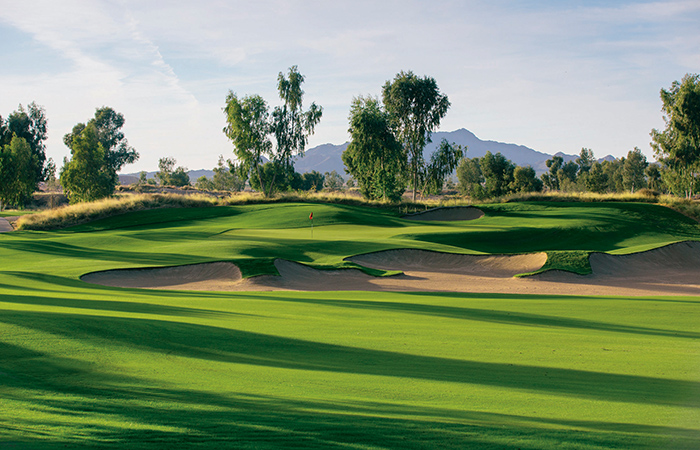 The course has gone through a transformation since opening in 2001 as many great layouts have.

It opened as a private upper-end players club designed for the best pros and amateurs in the area. While it attracted a select few, there wasn’t a sustained market, so in 2010 it was purchased by the Ak-Chin Indian Community, who later changed to its current name.

A 2014 renovation by Curley and Couples increased playability for all players in addition to huge bunkers replacing water for trouble along with challenging greens. They even added a six-hole short course titled miniDunes.

Then, in 2018, Mother Nature decided to do her own renovation when a fall flash flood turned the course into one huge fishing lake, totally covering everything which had attracted the golfers in the first place.

But thanks to the commitment of locally-based Troon Golf and the Ak-Chin Native American community, which owns the course, it was rapidly brought back to pristine shape and has produced a remarkable course comeback.

Old-time used car lot owners in remote locations used to use the marketing slogan, “The drive is worth the distance,” but in this case the drive — possibly past many other outstanding courses — is worth the payoff as it’s a great golfing surprise in an area which didn’t seem able to host many more prime courses.

The nearby Ak-Chin Resort hosts plenty of traveling golfers for some off-course entertainment and also plays host to the annual World Long Drivers Duel in the Desert contest where powerful golfers can make mockery of the laws of golfing physics.

Another graceful throwback to the foundations of Phoenix golf is The Phoenician Resort, which features 18 holes of golf surrounded by the huge resort. 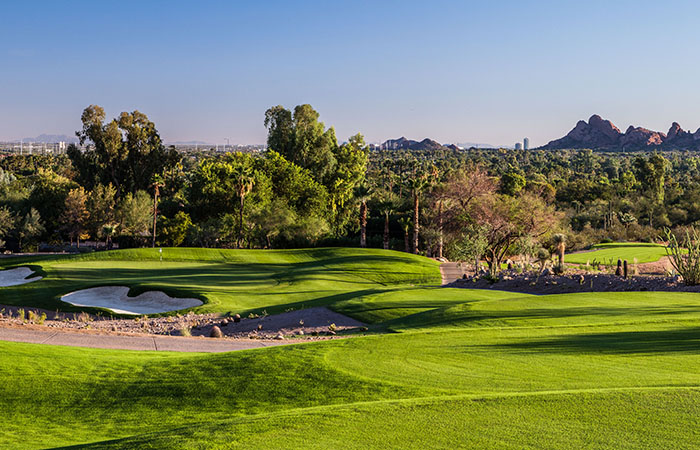 The founding of the lavish Phoenician Resort is famous, or infamous, as the case may be. Arizona developer Charles Keating built the resort and the golf courses to be the finest that money could buy. The swimming pool was reported to have cost $1 million by itself with its elaborately laid foundation

Unfortunately for Keating, much of the money used to produce the lodging brilliance came from unlawful white-collar criminal activities, which ultimately led him and some of his associates to a different style of cross-bar accommodations.

But the resort he built remains one of the most lavish anywhere with a recently renovated 18-hole championship course.

Architect Billy Bell designed the original par-72 adobe course at the Arizona Biltmore in 1929, which was later joined by a mountainside view links course with famed architect Frank Lloyd Wright laying out the hotel. As one of the few large lodging establishments ever done by Wright, it showcased his unique style with several spectacular pools, a large clock tower and bronze and gold-leafed roof and tiles around the resort. Even a huge outdoor checker board comes complete with moveable pieces.

The 27 holes of golf is old school and still fun for patrons of all ages and skill levels.

There is plenty that is familiar, famous and popular in Phoenix-area golf, but the old school and hidden golf surprises are well worth seeking out.