“Straight back, straight through,” I thought, as I stood over the final putt, a putt that would change my junior golf career. In spite of the large amounts of pressure that could have limitless effects, I stood the stance that I have used since I was old enough to walk and made a stroke blissfully nerve free.

Then the final putt dropped. It was as though there were no other sound in the world clearer than the exterior of my Callaway Chrome Soft meeting the bottom of the cup, which sat six inches below the surface of the 18th green. Immediately, my mind ran rampant, considering the ways my life would change following the win. “What would they think?” “How would they feel?” “Will they be proud of me?”

The rankings, of course, I have to remember the ranking boost. My success would soon be illustrated within the formulas of multiple ranking systems. Most of all, the AJGA Invitational champion bag would be mine. That bag has persistently fed my inner fire to be the best, and within minutes my clubs would hold a permanent residence within its blue and white fabric. There was truly nothing better than this triumphant outcome, but I had to snap out of it. 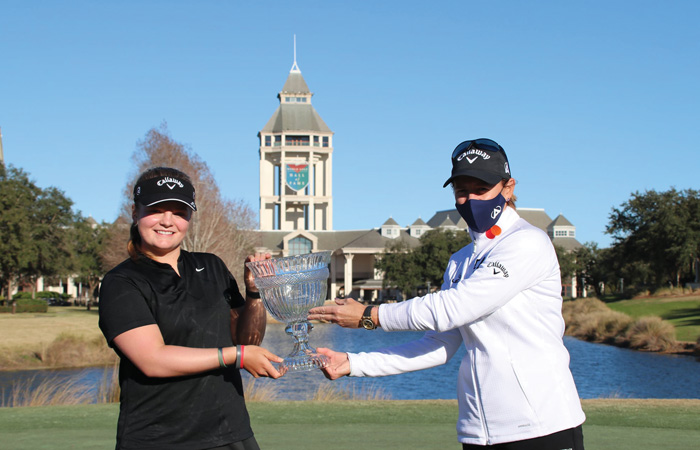 I opened my eyes to a dimly lit, St. Augustine Hampton Inn hotel room. Where I laid, consumed by the possibilities the following day held. I stared up at the chipped ivory white ceiling and tried my hardest to wander off into a deep sleep. However, counting sheep would not rid me of the constant, stomach-churning nervousness I felt. The instant gratification of visualizing a fantastic future was enough to take away my current troubles, but I knew this method would not last. In fact, it had been instilled within the depths of my mental process to not think this way, but the mere thought of a win brought me more excitement than any distraction could. I slowly turned to face the empty wall, and my head was full of resisting the rehearsal of the next day.

Only a few sounds in this world are as unfit to wake up to as the shrill sound of my father’s Tony Soprano Nokia ringtone. Nevertheless, I started the day with echoing beeping noises shaking the thin walls of our hotel. A thought cloud sat above my head, and it was littered with the ever-persistent what-ifs. As inviting as they may seem, drifting off into the abyss of possibilities on the golf course is about as helpful as the use of iron covers. But the thoughts continued to plague my mind. And the only disruption from the madness being the occasional interesting scene from Criminal Minds, which I watched as I put on my all-black ensemble and headed out the door into the electric blue hallway of the hotel.

As I walked to our rental car, my eyes met the boxy, red-and-white KFC drive-through restaurant that was accompanied by a $5 fill-up advertisement. I was immediately brought back to the previous two nights, where my father refused to surrender his “lucky parking spot” so I had walked through the only part of the restaurant that was open, the drive-through. I turned to face the car door, and quietly hoped that the mediocre fried chicken offered me good mojo. 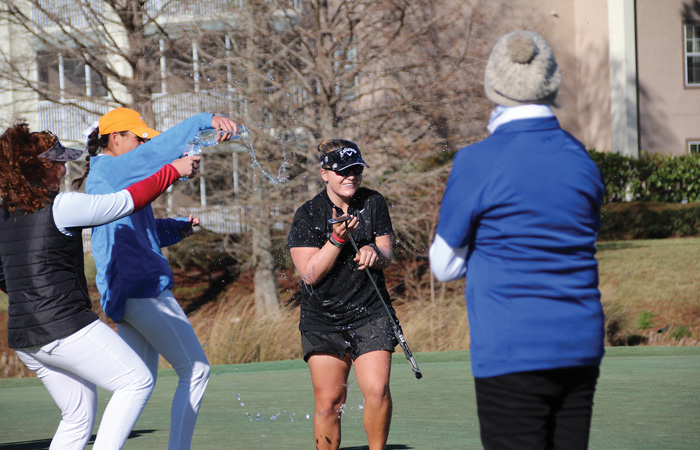 As we pulled out of the parking lot, my eyes met the Jimmy Dean breakfast that was in my hands. I had eaten the same “simple scramble” every single competition day for the last six months. However, it wasn’t the nonexistent flavor that was responsible, but the fictitious belief that eating the same breakfast every day is somehow related to golfing well (it’s not). Yet, I continued to suffer through the most important meal of the day as we passed a heavily wooded street named Francis. As ordinary as it was, it bore the same name that my little tabby cat at home did, which we had named after Francis Ouimet in The Greatest Game Ever Played. Though the golf ability did not transfer to my cat, the thought of “Lil Fran” brought a calm that I had not yet encountered on that sunny morning.

Mercifully, I finished my breakfast and looked out the car window to a line of lamppost banners with all the game’s greats displayed on them. From my seat, I could see the World Golf Hall of Fame tower, as well as the fresh morning dew on the Slammer and Squire golf course. The golf course on which I would soon be competing. It was apparent to me that I had not yet come to grasp the reality of being in the final group, but part of me knew that if I wanted to have a lamppost banner of my own one day, rounds like these were essential. 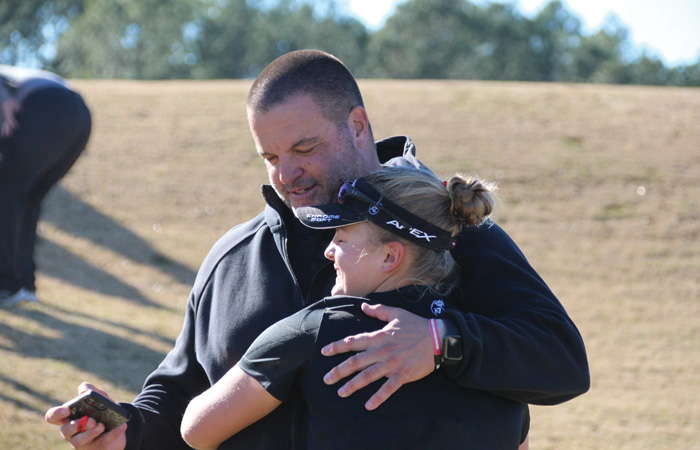 As I walked to the practice facility, I surveyed my surroundings just as I had the last four days. I passed the circular flower bed of pansies, and in the distance, I could see the Annika Foundation logo on the signs propped up by the putting green. The large green was filled with golfers, and though it was quiet, their tenacity was easily recognized. I always love observing the subtle differences between the first day and the last, one of them being an extra level of intensity caused by the finality that comes with the last round. Ever since I was over four-feet tall, I have worn black on the last day (in honor of Johnny Cash, the man in black) and this day was no different.

I began my warmup with the usual technique work, and slowly worked my way into target practice with my longer clubs. The more I progressed into my routine, the fewer people there were on the range. By the time I reached my driver, there were only three girls left. I wondered why something so simple grasped my attention that easily.

As quickly as I had asked the question, I had my answer. I have played this game since I was five-years old, and with that comes varying levels of competition. Although I had often visualized what the final group would look like in an event of this meaning, I never actually experienced it. The sounds of purely struck drives and the packed range were both things that I viewed as typical, so the peaceful solitude came as a shock. The vacant practice facilities amplified the sound of nearby birds’ morning chat, as well as the wind among the trees. Before I knew it, the birds were making their morning commute, and I followed suit by making my way over to the putting green.

I lined up my first putt just outside the right edge and felt my left elbow at my side as I took the putter straight back. The nearly empty putting green provided a perfect set-up to practice my speeds, and I did so knowing that they would be the key to my success. As I watched the final groups tee off from the putting green, I had a realization that I would soon be the one standing on the first tee, with 18 holes of championship golf just ahead. 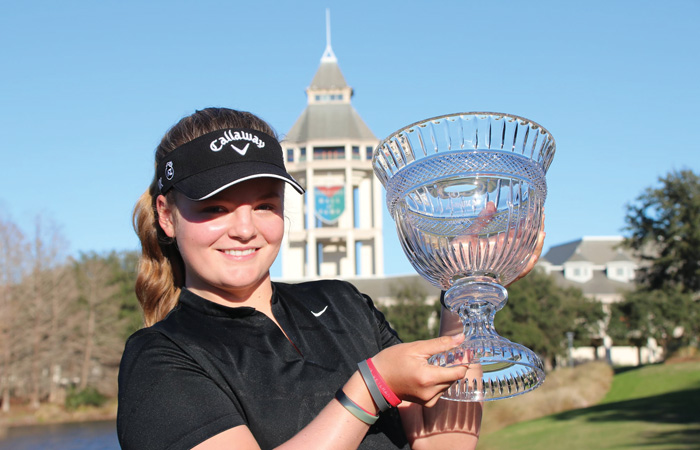 I looked down to face the thick black Sharpie line that coated my white golf ball and thoroughly observed the break of the eight-foot putt in front of me. The putt was into the grain and uphill with a slight break to the right, and the second it came off the face I knew it was directly on my line. I watched as the end-over-end line made its final rotations into the cup and heard my favorite sound in the world of the ball coming to rest six inches below the surface. I looked up to an endless blue sky, which was perfectly met with the tops of some evergreens on the horizon.

While I made the short journey to the first tee, my father came over and gave me a pep talk. He reminded me of the joyful attitude that led me to success the previous two days, so I stepped onto the green grass of the first tee with my sights clearly set on playing the course with a smile. I noticed that the blue of the hole No. 1 sign was accentuated by the sun’s glare and the shade of the trees behind it.

As I turned to face the starter, he said “Hi Annika!” As if it were the most casual thing in the world. One of the greatest golfers of all time, a golfer who I will always look up to and respect, was standing on the tee, prepared to watch my group tee off. Though her presence was expected, nothing could have prepared me for the excitement that jolted through my body.

Just prior to teeing off, I took one last look at a photo of my pets and smiled. Looking out to the vast fairway, I was certain that I was ready for anything that came my way. For what lies within the abyss of possibilities on the golf course remains caught within the confinements of the nearest out-of-bounds stake, and no matter what happened that day, I would return home to my dog’s wagging tail and many missing school assignments. I could see the sun’s reflection in the glassy crown of my driver face and took the club back just as I had for the last 10 years, completely and blissfully nerve free.